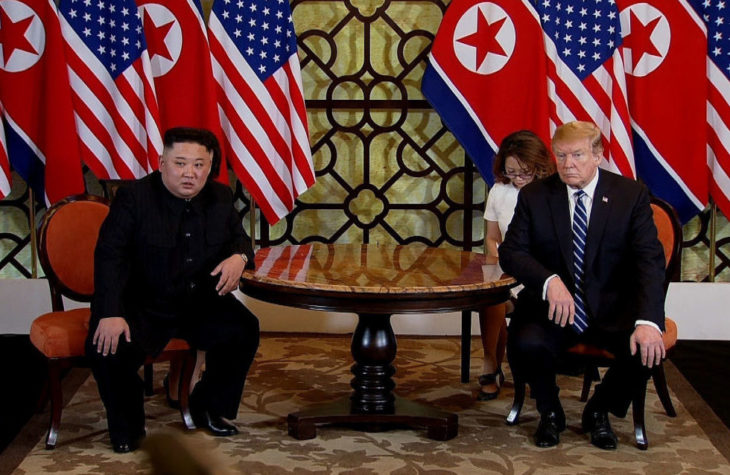 HANOI, VIETNAM – FEBRUARY 28: In this handout photo provided by Vietnam News Agency, U.S. President Donald Trump (R) and North Korean leader Kim Jong-un (L) during their second summit meeting at the Sofitel Legend Metropole hotel on February 28, 2019 in Hanoi, Vietnam. U.S President Donald Trump and North Korean leader Kim Jong-un abruptly cut short their two-day summit in Vietnam as talks broke down and both leaders failed to reach an agreement on nuclear disarmament. Trump said in a press conference on Thursday that the United States was unwilling to lift all sanctions and no plans had been made for a third summit. (Photo by Vietnam News Agency/Handout/Getty Images)

No diplomats anywhere enjoy dealing with North Korea. Pyongyang is difficult, indeed obstreperous at the best of times, while the Kim dynasty and its emissaries are notorious worldwide for their aggressive and undiplomatic trash-talking when they are displeased. Which they frequently are.

Donald Trump’s quixotic effort to make nice with the world’s strangest regime was therefore always a long shot, while his desire to denuclearize North Korea in exchange for diplomatic normalization and economic development was based in what can be kindly called fantasy thinking.

That has just been made painfully evident in Hanoi, where the much-ballyhooed...

No diplomats anywhere enjoy dealing with North Korea. Pyongyang is difficult, indeed obstreperous at the best of times, while the Kim dynasty and its emissaries are notorious worldwide for their aggressive and undiplomatic trash-talking when they are displeased. Which they frequently are.

Donald Trump’s quixotic effort to make nice with the world’s strangest regime was therefore always a long shot, while his desire to denuclearize North Korea in exchange for diplomatic normalization and economic development was based in what can be kindly called fantasy thinking.

That has just been made painfully evident in Hanoi, where the much-ballyhooed second summit between President Trump and the North Korean strongman Kim Jong-un fell apart with no deal of any kind. After investing a considerable amount of his personal prestige, and that of the United States, in building a relationship with Kim, Trump is flying back to Washington, DC, with nothing. His reality-TV-based notion of how to solve intractable diplomatic problems has been revealed as just another Trumpian sham, alongside Don’s vodka, his steaks, and his ‘university’.

This was not how the Hanoi summit was supposed to unfold. Last June’s inaugural summit in Singapore, the first-ever meeting between an American president and a North Korean ruler, led to frequent boasts by President Trump, usually via Twitter, that a major deal with Pyongyang was imminent. Talks with the North Koreans in Vietnam’s capital ended abruptly, a planned signing ceremony was canceled since there was nothing to sign, while Thursday’s diplomatic lunch was left uneaten. The leaders left Hanoi ahead of schedule, leaving many questions unanswered.

Trump went public first, explaining that the collapse of the talks was on Pyongyang: ‘Basically they wanted the sanctions lifted in their entirety and we couldn’t do that,’ Trump said in Hanoi before heading home, empty-handed. In exchange for shutting down their main nuclear complex at Yongbyon, the North Koreans demanded full sanctions relief, and that was too much for the American side to accept. ‘Sometimes you have to walk, and this was just one of those times,’ the president explained on a down note.

Then, in a rare midnight press conference, North Korea’s foreign minister fired back, explaining that the American president was lying. In Hanoi, Ri Yong-ho stated that, in fact, Pyongyang only wanted partial sanctions relief, specifically on five of the 11 sanctions applied to his country by the UN Security Council. In exchange, Ri elaborated, North Korea would allow US inspectors to observe the dismantling of the Yongbyon complex. Ri then ended his country’s dialogue with Trump with direct language: ‘It became crystal clear that the United States was not willing to accept our proposal. Our proposal will never be changed, even though the United States proposes negotiation again in the future.’

Thus, Trump’s hoped for ‘big win’ with Kim is officially dead. If an increasingly beleaguered White House, reeling from this week’s Congressional testimony from the president’s former consigliere Michael Cohen, wanted a diplomatic victory in Asia to distract from the mounting bad news at home, they failed bigly as Trump might put it. The president’s dreams of a ‘deal’ with Pyongyang – thanks to his unmatched ‘dealmaking’ skills of hoary Trumpian legend – have been rudely exposed as being as illusory as his fantasies of Mexico paying for his still-nonexistent ‘big, beautiful wall’ on America’s southern border.

Make no mistake here: Ri’s midnight presser is one for the history books. It’s difficult to think of any US president being publicly humiliated in such a fashion as this. Of course, anybody even vaguely acquainted with North Korean antics (the president clearly wasn’t one of them) should have anticipated that Pyongyang would not play by standard international rules. If Trump had paid attention to briefings by his Intelligence Community, which he famously does not, this unprecedented diplomatic debacle could have been easily avoided.

The truly unhinged element of all this was the grandiose magical thinking in the Oval Office in the first place that was driving Trump’s mistaken belief that he could outfox the Kims at anything. Nobody sensible assesses that Pyongyang will part with its nuclear weapons easily – or at all. The Kims are cunning and cruel but far from stupid. The North Korean regime has watched events unfold since 9/11 and has learned certain clear lessons.

Pyongyang knows that possessing nuclear weapons, even just a handful, is the only reliable insurance against American-led ‘regime change.’ The Kims learned from now-dead Saddam Hussein that if Washington, DC hates you and you don’t possess nuclear weapons, you’re doomed (and the worst thing you can do is fool the Americans into thinking you have ‘the bomb’ when you don’t). They learned from now-dead Muammar Gaddafi that American promises are no good, and it’s stupid to give up any of your weapons of mass destruction in exchange for empty Washington guarantees which won’t be worth the paper they’re printed on.

It needs to be stated that Donald Trump didn’t have anything to do with the demise of either Saddam or Gaddafi, his predecessors did that, but he inherited the lingering after-effects of America’s disastrous post-9/11 wars. Their lessons are evident to anyone who wishes to see them; oddly, that group includes few foreign policy experts in Washington, DC, and apparently none in the White House.

Donald Trump is headed home in defeat, indeed humiliation. His reality-TV-derived fantasies regarding how the world works have been exploded on camera by the Kims and their nasty regime. This has been a painful education for the president, not to mention an eminently avoidable diplomatic debacle for the United States. In the meantime, Robert S. Mueller, III, is said to be putting the finishing touches on his long-awaited report on the president and his 2016 ties to Moscow.