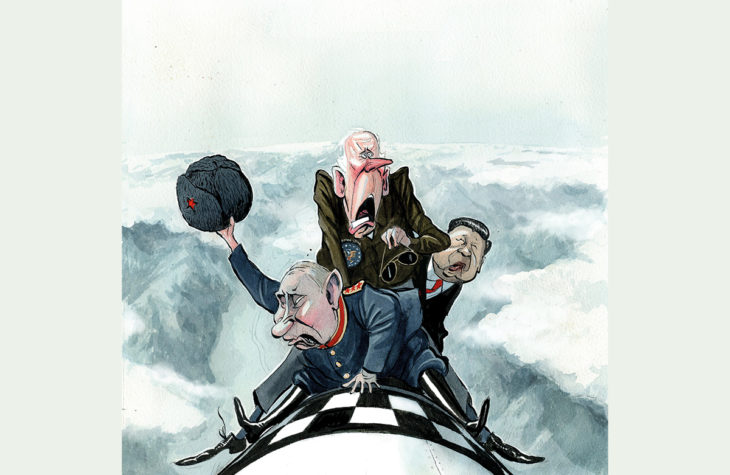 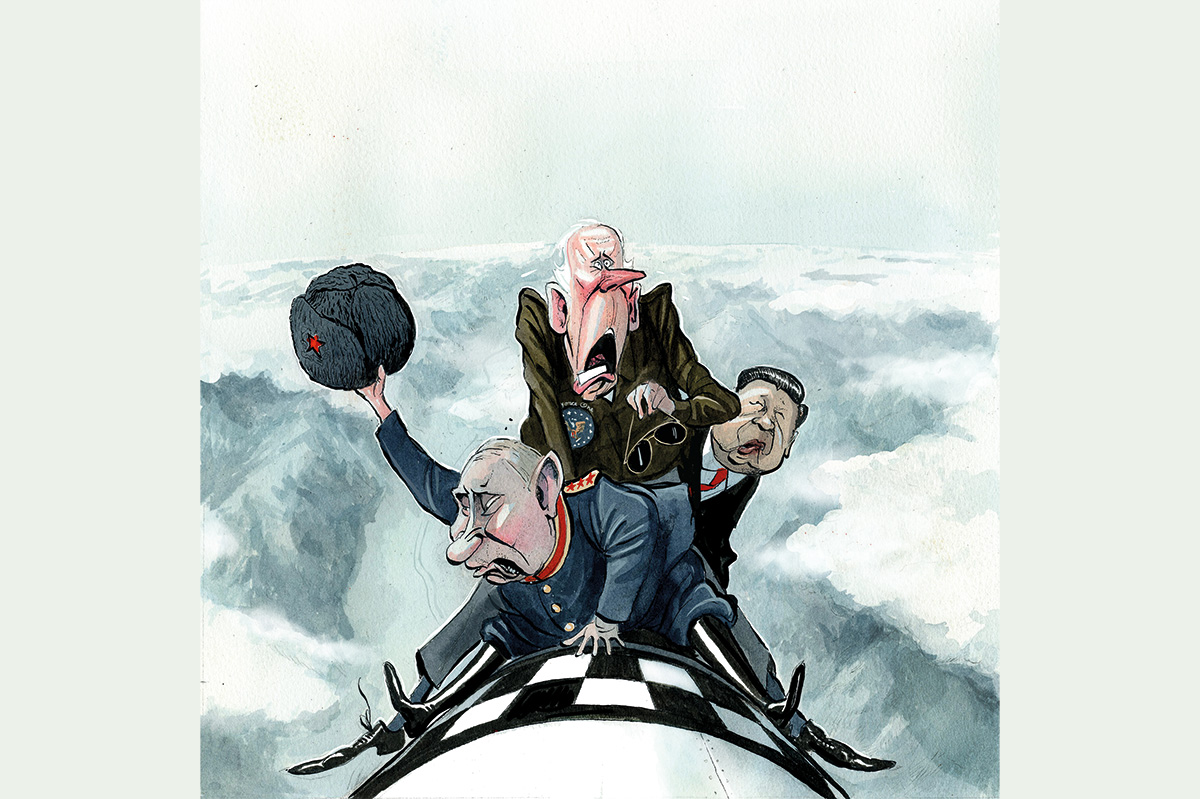 The chaos abroad that has marked Joe Biden’s presidency is accelerating. Russia’s bloody war on Ukraine is rolling from winter into late spring; Iran and its proxies are launching missiles into Iraq and Saudi Arabia; China is menacing Taiwan and other Asian neighbors, and North Korea is preparing to revive its nuclear program. Meanwhile, long-time US friends like Saudi Arabia and newer partners like India are starting to hedge their bets by cozying up to these regimes.

Is the post-Cold War, US-led world order fracturing? It certainly looks like it. America’s enemies no longer fear her...

The chaos abroad that has marked Joe Biden’s presidency is accelerating. Russia’s bloody war on Ukraine is rolling from winter into late spring; Iran and its proxies are launching missiles into Iraq and Saudi Arabia; China is menacing Taiwan and other Asian neighbors, and North Korea is preparing to revive its nuclear program. Meanwhile, long-time US friends like Saudi Arabia and newer partners like India are starting to hedge their bets by cozying up to these regimes.

Is the post-Cold War, US-led world order fracturing? It certainly looks like it. America’s enemies no longer fear her — and her friends don’t wholly trust her. Without a sea change in White House thinking, this is a recipe for a return to the might-makes-right eras of the twentieth century, where the United States was just one power among many, autocrats gained strength and the world eventually descended into war.

This increasingly menacing outlook is jarring to many Americans, in large part because the post-Cold War era felt so hopeful. With the Soviet threat eliminated, the United States could shift its focus from war to development, using its capital and goodwill to seed prosperity and peace around the world. Who can forget Bill Clinton’s cheerleading of Communist China into the World Trade Organization? Or the Western bankers who eagerly rushed into post-Soviet Russia? Or George W. Bush’s hard work to secure free-trade agreements the world over? Those were heady times.

The nature of US democracy has always been inherently optimistic — a great strength that’s allowed for leadership and creativity in foreign policy, but also a strategic weakness when it tips into naiveté. Spreading capitalist models in places like China and Russia, in hindsight, didn’t create the groundswell for democratization that Democratic and Republican administrations alike anticipated. Instead, US corporations shipped jobs to Shenzhen and Shanghai, taking advantage of lower labor costs to increase productivity and profits. Meanwhile, the men in the Kremlin and Zhongnanhai enriched themselves, enlarged their militaries and encouraged US politicians to keep the funds flowing. Democracy creation, it turns out, required more than empowering autocratic elites.

These arrangements were bound to fail at some point as populist anger about job offshoring bubbled up — and it did, with the election of Donald Trump in 2016. But America’s reckoning with authoritarian nations could have — should have — come far sooner, had history taken a different turn. George W. Bush, for instance, might have zeroed in on the growing Chinese menace after the People’s Liberation Army downed a US spy plane near Hainan Island in April 2001, had the subsequent September 11 attacks not subsumed his two-term presidency.

The War on Terror was a distraction to American global leadership on a scale that is only now becoming clear. It is no coincidence that Vladimir Putin occupied parts of Georgia while the Bush administration focused on the wars in Afghanistan and Iraq. The Pentagon, NGOs and defense contractors had stakes in continuing those wars, even though multiple presidents concluded there was no vital US interest in maintaining large footprints in either nation. After two decades of fighting, the American public understandably soured on the use of force abroad, given the cost in blood and treasure.

Is it any wonder that US voters elected presidents who reduced America’s role leading the post-Cold War, liberal international order? Barack Obama personified this trend by forging deals with dictators he liked and subjugating American leadership to inter- national organizations. Donald Trump halted the American retreat from the world, bolstered US deterrence, and tried to get allies to work together and shoulder more of the defense burden. But President Biden is reviving the Obama trend, most recently in his abrupt order to abandon Afghanistan to Taliban rule.

Biden’s aversion to the use or threat of military force cannot be overestimated. As vice president, he opposed the operation to kill Osama bin Laden. As a presidential candidate, he lamented the killing of Iran’s top terrorist, Qasem Soleimani, arguing that his death would only provoke Tehran. As president, he has indulged Iran in nuclear talks while the regime launches attacks across the Middle East, declined to support Cuba’s pro-democracy protesters for fear of angering Havana, and taken a softer line on Beijing, even as Xi Jinping threatens his neighbors. The world’s bad actors have rapidly stepped up their aggression over the past year because they are no longer afraid of suffering serious consequences.

Putin’s barbarous invasion of Ukraine is the key test of whether the Biden administration has the will to reverse these worrying trends by restoring US deterrence. So far, the signs are not encouraging. Even before the Russian assault began, the president repeatedly stated that he wouldn’t deploy US troops in Ukraine, which eliminated potentially helpful ambiguities and reduced the cost to Russia of a potential invasion. The US intelligence community released impressive, detailed information about Putin’s war plans, but observing a problem doesn’t solve it. In vowing to defend NATO territory, the president raised questions about whether he would send US troops to defend non-NATO allies in Europe — or further afield.

Nor did the State Department corral European allies into exerting extreme, unified financial pressure on Putin and his oligarchs to stop the war. The United States acquiesced when Europeans lobbied to keep Russian oil and gas imports flowing, providing Moscow with capital to pay for its predations. The Treasury department included carveouts in SWIFT sanctions for banks which continued to facilitate Russian energy flows. Secondary sanctions that would have punished Putin’s enablers in places like China have been kept off the table. If the United States doesn’t press its European allies to make hard choices, they rarely do.

The United States, Britain and other European partners continue to send weaponry and materiel to the Ukrainian armed forces, which is commendable. But they have also slow-walked sending the specific military aid for which Ukrainian president Volodymyr Zelensky has begged, including MiG fighter jets, S-300 air defense systems, and other heavy weaponry. The Biden White House ruled out the prospect of establishing a humanitarian no-fly zone, for fear of Putin’s reaction. The Ukrainian people won’t soon forget these decisions.

Biden’s advisors are part of the problem. Many served in the Obama administration and share the president’s views, applying dovish Obama-era tactics to the far more dangerous world of 2022. Not a single Biden political appointee was fired or resigned after the Afghanistan withdrawal debacle.

President Biden’s weakness is creating alarm and unexpected policy shifts in friendly foreign capitals. Germany’s declaration that it will reduce its reliance on Russian energy is welcome, but its commitment to rearm has rarely turned out well for Europe. Saudi Arabia wouldn’t be exploring the idea of receiving payment for its oil exports in yuan — a move that, if enacted, would threaten the US dollar’s reserve currency status — if Crown Prince Mohammed bin Salman weren’t unsure about America’s commitment to deterring Tehran, the world’s largest state sponsor of terrorism. India might not be buying Russian gas if it had confidence in sustainable access to cheaper US alternatives.

President Biden doesn’t have much time to change tack. Russia’s war on Ukraine is already flooding Eastern and Central Europe with millions of refugees. If Putin manages to conquer Ukraine or even extract concessions out of Kyiv, his track record suggests he’ll meddle in other nations. Rogue regimes also routinely watch and work with each other. If the recent warm meeting between Russia’s and China’s foreign ministers were any indication, their relationship is growing warmer by the day. And if Russia can win, even partially, in Ukraine, why wouldn’t a far more prosperous and militarily competent China take Taiwan?

Encouragingly, an emerging, bipartisan congressional consensus seems to want to get tougher with the Putins and Xis of the world — and isn’t starry-eyed about it. There is no appetite to revive democratization campaigns, but neither is there a willingness to let America become just another big power among many. Ten US senators recently visited Poland and Germany to consult with allies, meet refugees and show solidarity with Kyiv. This is a welcome development. If Capitol Hill is regaining its appetite to back more muscular measures to defeat Vladimir Putin’s westward march and Xi Jinping’s acquisitive ambitions, it’s very likely because the politicians are sensing the public’s alarm. Voters might well be realizing that the only way to restore the US-led world order may be to elect a new president.