The Democrats are always guilty of what they accuse Trump of 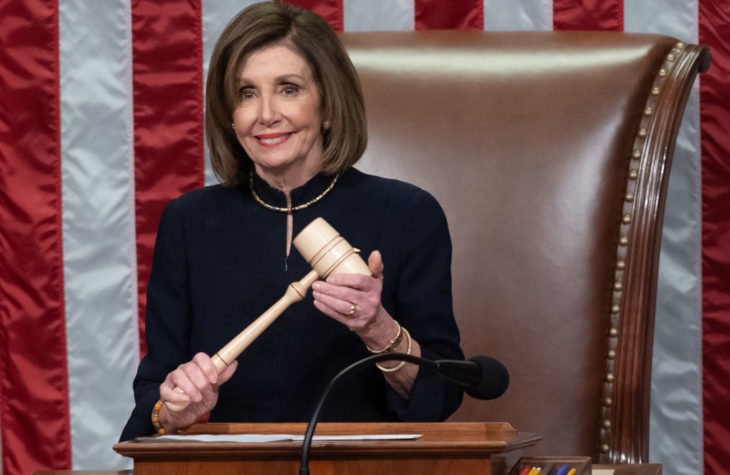 Speaker Nancy Pelosi presides over Resolution 755, Articles of Impeachment Against President Donald J. Trump as the House votes at the US Capitol

I am so glad that Nancy Pelosi has finally come to her senses and declared — on the floor of the House no less — that impeachment is 'a hatchet job on the presidency'. Yes, that’s right. The House, said Pelosi, is 'not judging the president with fairness, but impeaching him with a vengeance'. Nicely phrased! The whole circus, she said, violates 'fundamental principles that Americans hold dear: privacy, fairness, checks and balances'. Go, Nancy! Not only that, the impeachment process is taking place only because one party is 'paralyzed with hatred' of the president,...

I am so glad that Nancy Pelosi has finally come to her senses and declared — on the floor of the House no less — that impeachment is ‘a hatchet job on the presidency’. Yes, that’s right. The House, said Pelosi, is ‘not judging the president with fairness, but impeaching him with a vengeance’. Nicely phrased! The whole circus, she said, violates ‘fundamental principles that Americans hold dear: privacy, fairness, checks and balances’. Go, Nancy! Not only that, the impeachment process is taking place only because one party is ‘paralyzed with hatred’ of the president, and until they ‘free themselves of this hatred, our country will suffer’. I couldn’t agree more. Indeed, Pelosi was right again that the spectacle of impeachment is ‘about punishment searching for a crime that doesn’t exist’.

That was Nancy Pelosi in 1998 when a Democrat was being impeached, not Pelosi in 2019 when a Republican is in the dock. As recently as last March, Pelosi insisted that impeachment had to be reserved for the most serious sorts of crimes and required bipartisan support, as was the case in history’s two previous impeachments, that of Andrew Johnson in 1868 and that of Bill Clinton in 1998.

But that was before the impeachment express really got chugging. Now there is no talk of ‘fairness’, ‘checks and balances’, ‘hatred’, or what this nakedly partisan effort to weaponize the instrument of impeachment is all about. Hint: it has nothing to do with exposing any ‘high crimes’ or ‘misdemeanors’. On the contrary, it is merely the action of a bludgeon wielded to destroy a political opponent — it is, as President Trump himself wrote in an historic letter to Pelosi, ‘an unprecedented and unconstitutional abuse of power by Democrat lawmakers’.

The internet has a good memory. In 10 minutes, you will find similar pained protestations from people like Chuck Schumer, Jerry Nadler, on down. This leads to several questions. One is, why are all these people still in office, lo, these many decades later? Did some evil genie sew their lips to the public teat? Is serving in Congress like a professorship, something that comes with life tenure? Why, why are they still there?

While we ponder that question, there is the question of Impeachment 2019, a kind of Olympic Game that is televised, subject to endless commentary, something that is filler for advertisements and commercials of all sorts.

I have to acknowledge that I never thought it would get this far. I didn’t think that the instinct of self preservation had been entirely bred out of Democrats. I realize that they have been talking about impeaching Donald Trump from before he took office. Rashida Tlaib really countered the ‘crude’ Donald Trump when, upon being elected in 2018, she promised ‘we’re gonna go in there and we’re going to impeach the motherfucker’. She seems nice.

I thought that the prospect of the 2020 election would have made the Democrats fold their cards before now and retreat muttering, ‘well, anyway, we don’t like him’. Yet here we are. If anything has become clear over the past couple of months, it is that the Democrats have no case against the president; there are no crimes alleged, just the emission of a turgid vapor about ‘abuse of power’ and ‘obstruction of Congress’. There was no ‘quid pro quo’, no ‘pressure’, no ‘abuse of power’. All people with first hand knowledge of the infamous conversation between President Trump and President Zelensky acknowledge this. There was just the president doing the people’s business, legitimately exercising his power.

The public is sick, sick, sick of the spectacle. Not the news media, of course: drama sells papers and commercials. But the voters have seen, and seen through, this nakedly partisan folly. We know this in part because of the polls, which have the president riding high, but even more because of the current of feeling — ‘incapable of definition’, as Edmund Burke said in another context, ‘but not impossible to be discerned’ — that all cultural barometers are registering. Donald Trump has enjoyed ostentatious success during his first term: the economy, the stock market, the unemployment figures, the vibrant business environment, at long last tearing the albatross of misguided regulation of its neck — all that and more. Indeed, perhaps even more central is the rebirth of patriotic pride that ordinary Americans feel, in their country, and in themselves.

This was a theme that Rep. Jim Jordan stressed in his brief remarks this evening. Donald Trump has been a great success, and the Democrats hate him for it. ‘Democrats,’ he noted, ‘have never accepted the will of the American people’.

Rep. John Ratcliffe put his finger on what was perhaps the most nauseating aspect of tonight’s vaudeville: the ‘veneer of pretending to care about the Constitution’. Dem after Dem got to his (or, as it happened, her) feet and assured the TV audience what a serious business impeachment is. They spoke of ‘courage’, the ‘rule of law’, opposing the advent of ‘tyranny’, pledging their ‘lives, their fortunes, their sacred honor’ (gosh, someone has read the Declaration of Independence!). Quoth Pelosi, ‘today we are here to defend the democracy for the people.’ Air sickness bags were not, so far as I could see, distributed. Then they turned on the patented Democratic Outrage Machine and pumped out a series of baseless accusations that all came down to this: Donald Trump, a Republican, was elected over their vigorous opposition. How could that be?

One of the curious ironies about the impeachment pseudo-scandal (well, it is a scandal, but not because Donald Trump has done anything wrong) attached itself also to the whole Trump-Russia hoax. It is this: that the Dems were themselves guilty of what they were accusing Donald Trump of. Worried about ‘Russian influence’ on the 2016? How about the so-called Steele dossier, a putrid pile of Russian disinformation fed to Steele by Russians eager to bollocks up the American election process and then paid for by the DNC and the Clinton campaign as opposition ‘research’ that was surreptitiously fed to the FISA Court to spy on American citizens and provide justification for the investigation of Trump’s campaign. The mind boggles, or at least it should.

In this case, the real Ukraine scandal is the Biden family scandal. Yet somehow Joe and Hunter Biden’s corruption got transmuted in supposed wrongdoing by Donald Trump. How does that work? ‘How Did the Bidens’ Corruption Become Trump’s Scandal?‘ It’s the special alchemy at which Democrats excel. Republicans never learned the knack.

As one Republican member noted to Democrats tonight: one day you will be back in the minority, and it will not be not be fun. Well, it will be fun for some of us.

Towards the end of the evening, House Minority Leader Kevin McCarthy gave one of the evening’s most eloquent and compelling speeches. Among other things, he cited Alexander Hamilton, who warned about the the deployment of ‘impeachment driven by partisan animosity’ instead of real crimes. Should the House vote to impeach Donald Trump, McCarthy cautioned, it would go down as one of the worst decisions in that body’s history.

But so it has come to pass. As I write, the final vote on the first Article of Impeachment is still being tallied. But the Democrats already have a majority. There were a couple of defections from the Democrats, not a single one from the Republican side. Next stop, most likely, is the Senate, where this little tantrum will be crushed: with how much drama and spectacle is still unclear.