The lunacy of the ‘largely peaceful protest’

The media says one thing while also saying the opposite 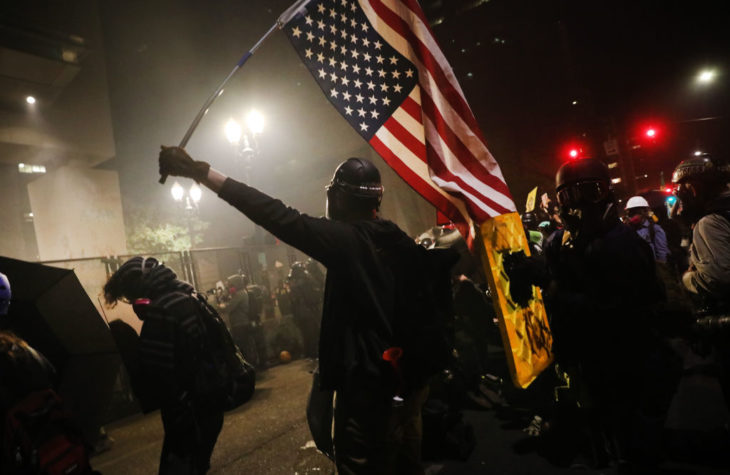 PORTLAND, OREGON – JULY 24: People gather in protest in front of the Mark O. Hatfield federal courthouse in downtown Portland as the city experiences another night of unrest on July 24, 2020 in Portland, Oregon. For 55 nights, protesters in downtown Portland have faced off in often violent clashes with the Portland Police Bureau and, more recently, federal officers. The demonstrations began to honor the life of George Floyd and other black Americans killed by law enforcement and have intensified as the Trump administration called in the federal officers. (Photo by Spencer Platt/Getty Images)

The lunacy of the ‘largely peaceful protest’

The great conundrum facing the anti-American left at the moment is how to react to the violent protest ripping up various Democratic-run cities. What is the preferred narrative? The two main choices are 1) it’s all peaceful protest, the 'right of the people peaceably to assemble, and to petition the government for a redress of grievances’? or 2) let ’er rip: we’re out there destroying stuff and hurting people because the country’s falling apart and the sooner the better. Just so, a contributor to the Oregonian, announcing his fears of an impending 'anti-democratic, racist police state’,...

The great conundrum facing the anti-American left at the moment is how to react to the violent protest ripping up various Democratic-run cities. What is the preferred narrative? The two main choices are 1) it’s all peaceful protest, the ‘right of the people peaceably to assemble, and to petition the government for a redress of grievances’? or 2) let ’er rip: we’re out there destroying stuff and hurting people because the country’s falling apart and the sooner the better. Just so, a contributor to the Oregonian, announcing his fears of an impending ‘anti-democratic, racist police state’, wondered whether he would find ‘the courage to resist racism and fascism’, by which I suspect he means a free, open, and democratic election in which a candidate he does not favor has the indelicacy to win.

For it should go without saying that the overriding criterion for choosing which narrative to plug is this: which story will do the most damage to Donald Trump and Republican prospects in the November election?

By and large the media has opted for option one, reasoning that most people, taking note of the Democratic character of all the most serious sites of mayhem, might forget to blame Donald Trump for the rampaging fiends tearing up our cities and shooting toddlers, policemen, stray pedestrians and each other.

At the same time, as a sort of counterpoint to this melody that everything is just fine, what we’re seeing are patriotic Americans out there exercising their First Amendment rights, combatting racism, police brutality, the death of George what’s-his-name, etc. — besides all that there is an obbligato of ominousness to remind people that this is Serious Business and that the thugs shooting commercial-grade fireworks at people and places in predominantly black neighborhoods today might just show up in the tony part of town tomorrow.

Still, the dominant note is ‘it’s a largely peaceful protest we see here’. People have been sniggering at that one ever since May 30 when a wretched MSNBC reporter repeated the mantra — ‘it is not, generally speaking, unruly’ — while standing in front of a burning police station.

But on it goes. The idea that the protests are actually violent is a ‘right-wing boogeyman’, according to a story just a few days ago in the Washington Post.
‘Democrats and local leaders reiterated on Monday,’ the story says, ‘that protests have been largely peaceful, and harshly criticized the federal forces, which have shot and seriously injured one peaceful protester and shoved others into unmarked vans.’ Ooh, those naughty ‘federal forces’ interposing themselves between the ‘largely peaceful’ hooligans — I mean ‘protesters’ — and their molotov cocktails.

By now, the mainstream media has perfected the mendacious gambit with a sort of stereoscopic vision, saying one thing while also saying the opposite. One of the best of the bunch came a few days ago when ABC, reporting on efforts of those ‘largely peaceful’ rioters to burn down a courthouse in Oakland, acknowledged that some of the ‘largely peaceful’ protesters ‘smashed windows, spray-painted graffiti and pointed lasers at officers’.

Lasers? Yes, they’re a new favorite. As White House press secretary Kayleigh McEnany noted when describing other incidents, ‘A federal agent’s hand was impaled by planted nails, another federal agent was shot with a pellet gun, leaving a wound deep to the bone, and tragically, three federal officers were likely left permanently blinded by the rioters using lasers pointed directly into their eyes.’

But then ABC got out the sugar and tweeted this about the Oakland incident: ‘Protesters in California set fire to a courthouse, damaged a police station and assaulted officers after a peaceful demonstration intensified.’

‘Intensified’? ‘A peaceful demonstration intensified’? The Twittersphere loved that one. It brought out everyone’s inner imp. The Wall Street Journal’s James Taranto was quick off the mark with a delectable contribution to the general levity: ‘It became even more intensely peaceful,’ he wrote in response to ABC’s absurd tweet. And Steve Hayward deserves honorable mention for this gem: ‘If ABC News covered Pearl Harbor: “Honolulu, Dec. 8: A peaceful flyover by Japanese pilots intensified yesterday…’

The whole farce reminds me of George Orwell’s tart reminder about how the corruption of language abets political corruption and vice-versa. “The word Fascism,’ Orwell wrote in ‘Politics and the English Language’, ‘has now no meaning except in so far as it signifies “something not desirable.”’

‘The words democracy, socialism, freedom, patriotic, realistic, justice, have each of them several different meanings which cannot be reconciled with one another. In the case of a word like democracy, not only is there no agreed definition, but the attempt to make one is resisted from all sides. It is almost universally felt that when we call a country democratic we are praising it: consequently the defenders of every kind of regime claim that it is a democracy, and fear that they might have to stop using that word if it were tied down to any one meaning. Words of this kind are often used in a consciously dishonest way.’

How Orwell would have savored ABC’s deployment of the word ‘intensified’ to describe an episode that, very far from being peaceful, was in fact a flagrant and disgusting example of the opposite.