Liberals don’t want Donald Trump to be civil. They want him to lose 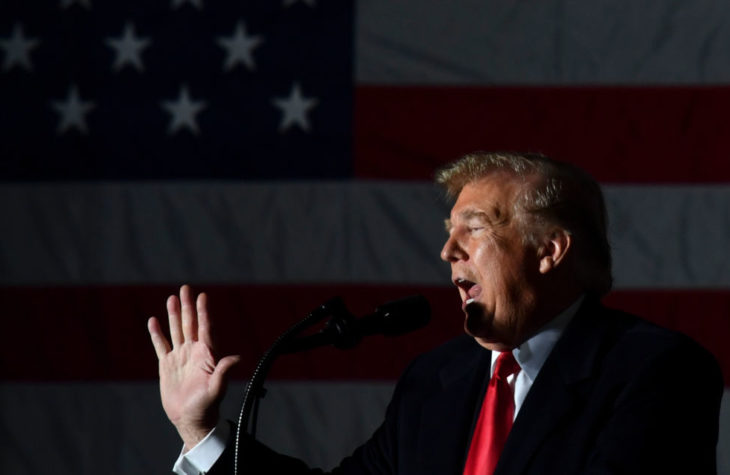 Liberals don’t want Donald Trump to be civil. They want him to lose

Independence of mind is nowadays in short supply among the commentariat. Certain big background concepts have been propagated thoroughly enough that everyone knows just what to write as soon as anything happens. If there’s any doubt — or worse, any resistance — wave upon wave of goodthink browbeating will put a quick end to it. And if that fails, a dissenter’s sheer sense of futility may do the trick. What’s the point of insisting that two and two is four when everyone else in the clever class insists it’s five?

Edmund Burke never gave up. But...

Independence of mind is nowadays in short supply among the commentariat. Certain big background concepts have been propagated thoroughly enough that everyone knows just what to write as soon as anything happens. If there’s any doubt — or worse, any resistance — wave upon wave of goodthink browbeating will put a quick end to it. And if that fails, a dissenter’s sheer sense of futility may do the trick. What’s the point of insisting that two and two is four when everyone else in the clever class insists it’s five?

Edmund Burke never gave up. But he reached a point where he was so sick of conventional enlightened opinion’s acceptance of revolutionary France as just another great power that he admitted someone like him might someday be seen as not ‘resolute and firm, but perverse and obstinate.’

But what the hell — ours is an age of perversion, so why not obstinately defend Donald Trump from liberal accusations of inciting violence? Robert Bowers, the gunman who went on a killing spree in a Pittsburgh synagogue Saturday, was apparently not a Trump voter and had been an outspoken critic of the president in the crackpot corners of the Internet he frequented. Far from inciting violence against Jews, Donald Trump has welcomed a Jewish son-in-law into his own family, along with the conversion to Judaism of a beloved daughter. As president, he has been nothing if not unstinting in his support for the Jewish State. Ah, but Trump wants to restrict immigration, and we know that anyone who does that has to be an anti-Semite too, right? Except that the architect of much of Trump’s immigration policy is a Jewish American, Stephen Miller.

No one who takes cues from Trump or the Trump administration would go on a shooting spree in a synagogue. But if the rap can’t be pinned on Trump directly, perhaps the entire deplorable right can be indicted. Lots of Republicans are running ads criticising George Soros, after all. And Soros is Jewish. Therefore Republicans are indeed anti-Semitic.

No. Anti-Semites hate George Soros because he’s a Jew. But most right-wing people dislike Soros and oppose his influence on the country, and the world, because he’s a left-winger. Their criticisms target him for his ideological activism, not his religious identity. And if the terms in which Soros is criticised are frequently overblown, are they any more so than the terms in which the left hypes the menace of Charles Koch or Sheldon Adelson or Rebekah Mercer? Or for that matter, the menace of Donald Trump, who is either an actual fascist or an enabler of fascism — if you believe what liberals who hate him tell you.

Politics, as an old Roman proverb has it, ain’t beanbag. George Soros and Hillary Clinton have a view of what America and the world should be that’s very different from the view of Donald Trump and his supporters. These views are irreconcilable with respect to some very serious matters, including national borders and questions of war and peace. In a free, competitive, adversarial political system, these differences should translate into strong and even heated political campaigns. If campaigns’ arguments are often poor, the question must still be asked: does the greater evil lie in exaggerating how bad the other side is or in downplaying the seriousness of what’s at stake? Liberals, who have a distinctly anti-political and technocratic tendency, prefer to shut everyone up, if they can’t get their first-choice outcome — the silencing only of their critics. Let a pall of civil silence descend upon politics, and just let the experts calmly administer the economy, foreign policy, and the molding of society. There’s no need to argue; simply obey.

Non-liberals — even liberals of the older and more honourable sort — reject this model. The most important questions in public life are not technical questions. They are questions about which good people, and bad people too, can have passionate differences. They need to be argued openly and loudly. Caricatures, whether of Trump or Soros or anyone else of great influence, are less of a problem than a technocracy-cloaking consensus is. And arguments can be very robust, even overblown, without leading to violence. Don’t be afraid of politics: it’s meant to be rough.

Robert Bowers was not a normal man interested in politics but incited by Donald Trump or the Republican Party’s rhetoric; he was a murderous man with anti-Semitic views antithetical to Trump’s party and his very family. Cesar Sayoc was not an otherwise upstanding Republican driven to mail bombs to prominent liberals by President Trump’s words — he was a freak with a rap sheet as long as his arm, including a previous bomb threat that had nothing to do with politics. The idea that Sayoc would not have been a threat to anyone if Trump had not inflamed him with trash talk about CNN or the Democrats is nonsense. He would have been no less of a violent criminal if Hillary Clinton or Mohandas Gandhi had been president.

Liberals know this, but they do not care: Sayoc and Bowers are clubs with which to beat Trump and the Republicans. If Trump were tearful and begging for absolution from the people who hate everything he stands for in politics, they would be no more merciful in morally cudgeling him. No Republican president has ever been spared liberals’ wrath because he tried to appease them. If Trump denounced his own voters as deplorables, as a legion of Sayocs and Bowerses, the liberals who attack him now for his defiance would attack him then for having ever attracted such people — and the only remedy, then as now, would be a complete Democratic victory this November and in 2020. Liberals don’t think conservatives or Republicans should be polite. They think they should lose.

But that’s nothing to cry about; that’s roughhouse politics. The only pity is that this predictable partisan acrimony takes attention away from the lives lost in Pittsburgh. The policy remedy for that was perpetrated there is not to tone down debate but to identify and prosecute violent extremists—  left or right; political, religious, or otherwise — before they can kill in the first place.