There is nothing new in the plot of this lugubrious sitcom 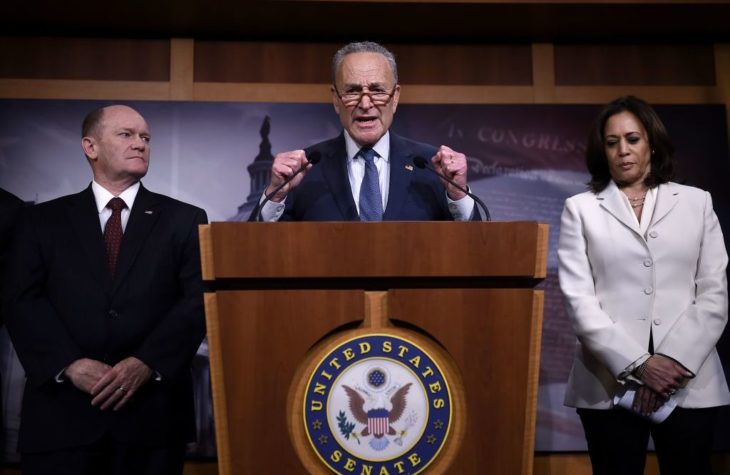 A couple of days ago, members of the United States House of Representatives processed with all their accustomed pomp and dignity to file, formally, two articles of impeachment against President Trump. Yesterday, Chief Justice John Roberts swore in the senators, who promised, scout’s honor, to deliberate with all the impartiality for which that great legislative body is known, i.e., to deliver their verdict almost exclusively on party lines. They didn’t say that, of course, because niceties must be preserved in these august chambers, especially when the television cameras are running, but everyone knows that is what is...

A couple of days ago, members of the United States House of Representatives processed with all their accustomed pomp and dignity to file, formally, two articles of impeachment against President Trump. Yesterday, Chief Justice John Roberts swore in the senators, who promised, scout’s honor, to deliberate with all the impartiality for which that great legislative body is known, i.e., to deliver their verdict almost exclusively on party lines. They didn’t say that, of course, because niceties must be preserved in these august chambers, especially when the television cameras are running, but everyone knows that is what is mean by ‘impartial’ in our political life today.

In other words, what we have here was a sterling instance of what the philosopher Yogi Berra called ‘déjà-vu all over again’. The Democrats have been talking about impeaching Donald Trump from the day he was elected. As Rep. Al Green memorably put it back in 2018,  ‘I’m concerned if we don’t impeach this president, he will get re-elected.’ And we can’t have that, can we?

Unless your name is Bill Kristol or Rachel Maddow, you know that the actual articles of impeachment are preposterous trumped up charges. One article alleges abuse of power, but what it describes is simply the exercise of power, which — pay attention class — is not the same thing. The contention is that the President withheld Congressionally approved military aid from Ukraine in order to bully the Ukrainians into digging up dirt of the Democrats’ leading Geritol candidate for president in 2020, Joe Biden. One problem with this fantasy is that everyone directly involved in the discussions denies anything like that happened. The whole contention is a rabbit hole that only political desperation could entice one to follow. (Another problem is that no one needs to dig up dirt on Joe Biden: he is a motorized, self-contained backhoe for scandal, digging up dirt on himself free and for nothing.)

The other article alleges ‘obstruction of Congress’. Never heard of that one? That’s OK, no one else had either. The Dems in the House were on a hasty war path (apologies to Elizabeth Warren) against Donald Trump: they wanted him gone, now, and he had the temerity to go to the courts to defend himself. Outrageous! Impeach for seeking legal counsel.

There is nothing new in the plot of this lugubrious sitcom, but naturally some characters are retired while new ones take their place. It seems like only yesterday that Michael Avenatti or Stormy Daniels or Michael Cohen was going to be the straw the broke the camel’s back of the Trump presidency. That crew is history, but today’s cameo performance is by Lev Parnas, a Soviet-born former associate of Rudy Giuliani, the president’s personal lawyer. Parnas, under indictment for campaign finance violations, went on the Rachel Maddow show to say nasty things about his former employer and the president in the hope of lightening his sentence. However much time he gets, I hope it will be enough to read Canto 34 of Dante’s Inferno, which describes Judecca, the fourth ring of the ninth circle of hell in which Traitors to Their Benefactors are scattered about under a mountain of ice. Politico ran an article about Parnas’s ‘revelations’ with the headline ‘Here’s what the Parnas revelations mean for Trump‘. Many readers, I know, feel uneasy about reading Politico, so I can in this instance save them the trouble. What Lev Parnas means for Trump is the same thing the phalanx of earlier would-be character assassins have meant: nothing.

But of course that doesn’t mean that the Democrats will give up on their search for the unholy grail of someone, anyone, who can take down the duly elected president of the United States. Indeed, what we are witnessing is the latest iteration of their new strategy, call it the Kavanaugh Strategy. The great William Jacobson over at Legal Insurrection is right: Lev Parnas is the new Julie Swetnick, the pathetic bimbo that Creepy Porn Lawyer™ (and now jailbird) Michael Avenatti dragged out of some obscure corner to accuse Brett Kavanaugh of running a white slavery sex ring (or something) when he was 12.

You have to hand it to the Democrats, though. They really know their way around the gutters of partisan politics. Nothing is beneath them. They demonstrated that in concentrated form during the confirmation hearings for Brett Kavanaugh. And we’ve seen a more generalized version of the same process with respect to Donald Trump. The Dems have been scurrying around the sewers of innuendo and scurrilous falsehood from the moment Donald Trump became a serious candidate for the presidency. One amusing gambit that just made its appearance is a report by the Government Accountability Office, a Congressional a watchdog agency, asserting that the president’s administration broke the law when it withheld aid to Ukraine. Well, that’s the opinion of the GAO. What it says has no legal force, which is why Barack Obama paid the agency no heed the seven times it found his administration in violation of the law. Moreover, the Office of Management and Budget released a memo arguing that the delay in releasing the funding to Ukraine was in fact an effort to fulfill, not frustrate Congressional intent. No matter. Nancy Pelosi, Chuck Schumer, and the rest of the Romper Room cited the GAO opinion as justification or corroboration of the House Articles of Impeachment, but its actual (as distinct from its rhetorical) relevance is nil.

I have elsewhere suggested that the House retire its permanent committee on the budget, since they do not do budgets anymore, and replace it with a standing committee on impeachment. I understand that the committee would be more or less dormant when a Democrat was in the White House. That is largely a function of something I mentioned above: that Republicans do not understand or play political hardball as effectively as Democrats. But the genius of forming a standing or permanent committee on impeachment is that whenever there is a Republican president the whole machinery of impeachment is there, ready to go.

As far as I know, the Dems have yet to make the standing committee on impeachment official. But it is clear that they have many of the requisite elements at their beck and call.

Writing at National Review, Andrew McCarthy noted the bizarre fact that although the impeachment trial has now officially begun, the Dems are nonetheless continuing their investigation. ‘Their goal,’ McCarthy drily observes, ‘is to pressure the Senate not merely to conduct a trial but to complete the investigation that the House failed to complete — calling witnesses and gathering evidence, as if a trial were nothing more than an extension of an open-ended grand-jury probe.’ McCarthy continues:

‘Senate Majority Leader Mitch McConnell and Senate Republicans should not let them get away with it. No trial court would allow itself to be whipsawed this way. A federal judge would tell prosecutors to go back to the grand jury, finish the investigation, and come back to the trial court when they have a case ready to be tried, not investigated.’

Freud spoke of ‘analysis terminable and interminable’. The Dems have opted for the latter. If they have their druthers, the investigation into Trump’s alleged wrongdoing will never end, because, according to them, his administration should never have begun. Impeachment is no longer a last-resort mechanism to address grave crimes or ostentatious dereliction of duty. It is just another bludgeon in the armory of political warfare. Its promiscuous deployment betokens a profound corruption, a profound sickness, in the tissues of the American republic. But it is transparently clear by now that the Democrats do not care a whit about that. What they care about, what motivates them (if I may quote Hobbes) is simply a ‘perpetual and restless desire of power after power, that ceases only in death’.