What if Donald Trump is the Steve Jobs of politics? 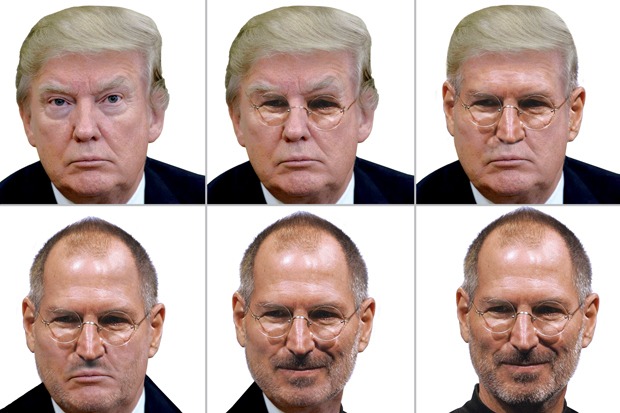 What if Donald Trump is the Steve Jobs of politics?

I can understand some people not liking the current president of the United States. As Conrad Black put it recently, ‘Donald Trump is a strange cat and an acquired taste.’

What I don’t understand is people who should know better being afraid of Donald Trump.

For example, how can it be that among all the experienced, eccentric and supposedly visionary denizens of Silicon Valley, only Peter Thiel recognised that Donald Trump is cut from the same cloth as the most celebrated tech titans: a disruptor, an innovator, a maverick, and an up-and-coming ‘crazy one,’ in the mould...

I can understand some people not liking the current president of the United States. As Conrad Black put it recently, ‘Donald Trump is a strange cat and an acquired taste.’

What I don’t understand is people who should know better being afraid of Donald Trump.

For example, how can it be that among all the experienced, eccentric and supposedly visionary denizens of Silicon Valley, only Peter Thiel recognised that Donald Trump is cut from the same cloth as the most celebrated tech titans: a disruptor, an innovator, a maverick, and an up-and-coming ‘crazy one,’ in the mould of the myth-makers to whom the famous 1980s Apple ads paid homage?

What, pray tell, is so incomprehensible (or upsetting) about a startup — the topsy-turvy but ultimately capable Trump campaign — putting an entrenched rival out of business? Isn’t that the way of the world, not the end of it?

And — this one really stumps me — why can’t otherwise astute marketers see that one man’s ‘a thousand songs in your pocket’ is just another man’s ‘big, beautiful wall’?

At any rate, it’s patently obvious that while Trump and Jobs are very different — Jobs preferred orderliness, for instance, where Trump appears to thrive on chaos — their similarities go well beyond a knack for visual metaphors, a mastery of the ‘reality distortion field,’ and an insistence upon a $1 annual salary.

Firstly, there are the personality quirks that Donald Trump has in common with the late Steve Jobs, like: a gross unwillingness to apologise, combined with a huge willingness to offend and belittle; a predilection for using superlatives to describe everything he does (the best… you’re gonna love it… it’s revolutionary); and an obsessive, workaholic disposition supported by abundant stamina and energy despite scant sleep and dietary habits that would lay most people low (fruitarianism and veganism; McDonald’s).

And there are even bigger things about The Donald that put one in mind of The Steve.

Above all, Donald Trump does, as Steve Jobs did, possess an astronomical self-belief. Although this kind of Muhammed Ali-level swagger does not always end well, when it does succeed, we usually recognise it as a heroic quality.

The two chief executives also share a working philosophy that vision, emotion, and essence are more pragmatic than facts, arguments, and particulars.

Jobs, who primarily studied humanities not engineering, said he came to realise ‘that an intuitive understanding and consciousness was more significant than abstract thinking and intellectual logical analysis.’ Which is totally Trump’s M.O. (or should I say OS?). And if that approach helped Jobs revolutionise personal computers, animated movies, music, phones, and tablets, it might be the same approach that helps Trump re-make politics, government, media, international relations, and culture.

And you can make fun of Trump for his Tweeting if you wish, but understand that Twitter for Trump is exactly what the Apple Stores were for Steve Jobs: a way to make sure nobody, but nobody, can get in between him and his audience to dilute the brand experience. Apple’s retail stores are the cask-strength distillation of Apple, designed to thoroughly intoxicate you; Trump’s Twitter feed is full-on, unmitigated Trump, calculated to knock you back in your seat.

And there is, of course, the two leaders’ Olympic-class disagreeableness. Steve Jobs was summoned back to Apple in 1996 with a clear brief: make that company great again. And central to that project (from his point of view) was his unflinching capacity to bash heads and make people literally cry, and, outwardly, to surpass the public’s expectations — to give them things they wanted before they knew they wanted them. (Hands up if you thought your mobile phone was pretty good in 2006.)

Likewise, Donald Trump was elected — with quite broad support, actually — to do a very Steve-like job: think different, and be different. So why would you expect Trump to pay deference to orthodoxy, adhere to the long-standing norms of his post, or be a ‘nice guy’ (in public, or, especially, behind the scenes)?

To double-check my thesis about Trump and Jobs, I had a simultaneous browse through two books: Walter Isaacson’s biography Steve Jobs and Corey Lewandowski’s Let Trump Be Trump, his memoir of his 18 months as Trump’s campaign manager. And it’s astonishing the degree to which you can transpose passages from one book to the other interchangeably. Read these and consider if the subject is Trump or Jobs:

‘It was as if [his] brain circuits were missing a device that would modulate the extreme spikes of impulsive opinions that popped into his mind.’

‘He would assert something—be it a fact about world history or a recounting of who suggested an idea at a meeting—without even considering the truth.’

‘He was not a model boss or human being, tidily packaged for emulation. [He] could drive those around him to fury and despair.’

‘The key question is why [he] can’t control himself at times from being so reflexively cruel and harmful to some people.’

How’d you do? While you might have thought you heard Trump being described in some of those, in fact all four quotations are from Isaacson’s book about the man that still makes Woz weep over past wrongs.

We know the multiple marks Jobs left on history. But what of Trump’s potential contributions?

Well, Trump’s Macintosh, you might say, was to vanquish the Clinton crime family — not a bad start.

Maybe his Pixar will be to de-politicise the intelligence community and the Justice Department.

With any luck, his iPod will be quarterbacking the defeat of the terrifying surge of leftist authoritarianism (in part, by continuing to mock the Big Lie of political correctness), enabling us to speak freely and think clearly again.

Perhaps Trump’s iPad will be to confound our habituated relationship with government, paving the way for innovative public and private structures — ones more in tune with our times — to emerge.

In these relatively early days of his tenure, I’d doubt if even Trump himself knows what good deeds he can preside over; remember how long it took Jobs to hit his stride?

But there are no two ways about it: Donald Trump shows every possibility of making a dent in the universe. Let’s hope it’s a good one. A year into his first term of office, such optimism feels warranted.