The DNC would rather lose than nominate Tulsi Gabbard

The four-term Hawaii congresswoman is too unorthodox for the Democratic party. What a shame 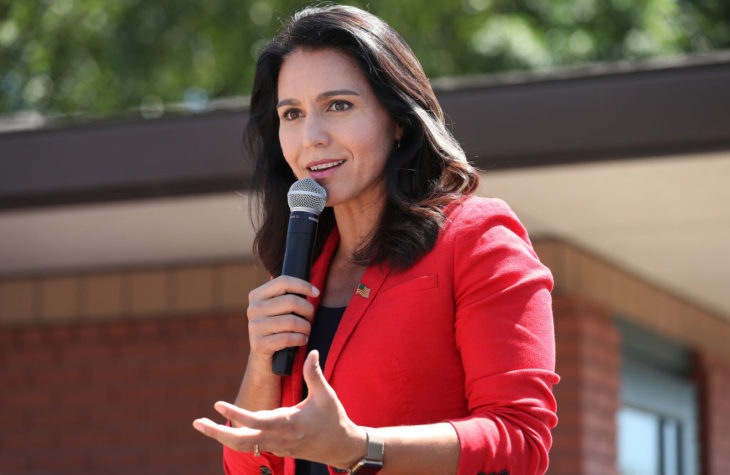 The DNC would rather lose than nominate Tulsi Gabbard

Tulsi Gabbard is arguably the most interesting woman in American politics today. A combat veteran from the Iraq war, the Hawaii Democrat’s beliefs were forged not only in the desert wastelands of Iraq but also by the wastefulness of America’s permanent bipartisan fusion party.

Having served in the US Army National Guard in a medical unit during the darkest days of pre-surge Iraq, Gabbard was forced to question all of her pre-war assumptions. From that point, she entered politics and quickly rose to prominence as one of the few voices of restraint and reason among Democrats...

Tulsi Gabbard is arguably the most interesting woman in American politics today. A combat veteran from the Iraq war, the Hawaii Democrat’s beliefs were forged not only in the desert wastelands of Iraq but also by the wastefulness of America’s permanent bipartisan fusion party.

Having served in the US Army National Guard in a medical unit during the darkest days of pre-surge Iraq, Gabbard was forced to question all of her pre-war assumptions. From that point, she entered politics and quickly rose to prominence as one of the few voices of restraint and reason among Democrats now infected by the warmongering ruling class.

Since then, the four-term congresswoman has been lampooned by the leaders of her own party for her troubles.

If she were any other Democrat — say, John Kerry — she would have been lauded by the Democratic National Committee both for her war service and for her outspoken opposition to it — at least as long as Republicans were in charge. Trouble is, Gabbard is not a white, Ivy League-educated male with a patrician disposition like Kerry’s and that of so many powerful Democrats today. Gabbard actually has skin-in-the-game. She fought for — and earned — everything she’s achieved.

Gabbard became a senior DNC official during the 2016 presidential election. But she refused to sell out to the corrupt Clinton-Obama machine and spoke out against the blatant corruption that unfolded during the Democratic party’s presidential primary. Because of her stoic refusal to tolerate the Clinton chicanery in 2016, Gabbard was placed on the outside of the party’s mainstream (which isn’t a bad place to be these days).

Now that Hillary Clinton has been totally discredited, and former President Obama’s legacy increasingly looks to be irrelevant — both because of the enduring success of President Donald Trump and because of the disastrous showing of Joe Biden’s current presidential candidacy — Gabbard now stands as the only one of the countless Democratic party presidential candidates in 2020 who actually could give President Trump a real challenge.

So, it is perplexing to see the corrupt Democratic party bar Gabbard from the upcoming Democratic party presidential debate. The reason for this move, they say, is because of ‘irregular’ Democratic National Committee rules insisting that, in order to qualify for the third presidential debate, candidates must have 130,000 unique donors and register a minimum of two percent in four DNC-approved polls. Gabbard easily acquired her donors. In fact, many are average Americans just trying to get by, who, like us Trump voters, were sick to death of the terrible status quo in Washington. As for the two percent in these Democratic party polls, Gabbard has ‘exceeded two percent support in 26 polls, but only two of them are on the DNC’s certified list,’ according to officials in the Gabbard campaign.

For the record, Gabbard has polled well in official polls conducted by RealClearPolitics. She has also crossed the DNC’s arbitrary two percent threshold in polls conducted by establishment organizations, ranging from the Boston Globe to The Economist. In a sane world, these polls would be more than enough to qualify Gabbard to have an audience at the third Democratic party debate. But this is the DNC in 2019.

Compared to other Democratic candidates for president, Gabbard is not especially radical. She supports key GOP positions in the war on terrorism. But, given that Gabbard is an independent thinker who has spent as much time dinging her own party’s leadership as she has that of the Republican party, she has a huge target on her back. (It also hasn’t helped that Gabbard this month signed on to Ilhan Omar’s resolution in support of the anti-Israel Boycott, Divestment, and Sanctions movement.)

Unlike more establishment candidates, Gabbard actually appears poised to do everything she has promised to do. In this way, Gabbard is a lot like the brash real estate developer from Manhattan that we voted for in 2016.

And therein lies the ultimate problem for the DNC.

While the DNC’s leadership is just as fanatically left-wing as Vermont democratic-socialist senator Bernie Sanders, most of them cannot afford to be good, democratic socialists. They’ve all been bought out by the neoliberal interests on Wall Street.

Since the rise of Bill Clinton and his apparatchiks in the 1990s, Democrats have embraced Wall Street; they advocated ‘free’ trade and greater levels of illegal immigration, in order to satisfy their big-money donors — all the while betraying the working-class people who had long supported Democrats because they thought their ideas favored the ‘little guy.’

Most Democratic party powerbrokers would be crushed under the revolutionary zeal of their fellow leftists, if Democrats removed the neoliberal corruption at the heart of their party. So, at the same time, the Democratic party’s base moves farther leftward, their leadership does everything it can to hold them in place.

I am not declaring my support for Gabbard as president, of course. But I respect her. Even when I disagree with her — as I do when it comes to her stance on Israel and on abortion — I still admire her honesty. And, despite the absurd charges that she’s a Russian agent provocateur, I find her a refreshing voice of reason on the left. That’s something sorely needed and maybe even good for the country.

Clearly, the same anti-democratic forces that ravaged the DNC from within during the 2016 primary are working overtime to stymie the honest campaign of Tulsi Gabbard. This should concern everyone because we are witnessing the deep state in action yet again.

Gabbard won’t win the primary because her own party is sabotaging her and making it impossible for her to get a fair hearing. That’s probably for the best from the Republican perspective, because Gabbard is likely the only Democratic candidate at this point who could give President Trump real problems in 2020. She is talking about serious policy issues that affect everyone while all of the other politicians are busily sniping at each other; ranting about Russia; and hoping for a recession.

It’s too bad that she and Trump don’t get along, as she’d make a great VP choice for Trump. The combination of Trump and Gabbard would blow up the permanent bipartisan fusion party while protecting the interests of ordinary Americans, like us.

Brandon J. Weichert is a geopolitical analyst who manages The Weichert Report. This article was originally published in American Greatness.