‘The State of Florida is where woke goes to die,’ he told a Pennsylvania crowd 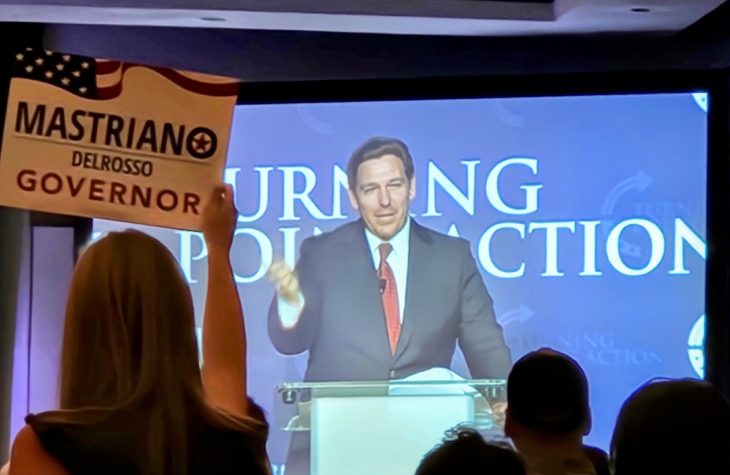 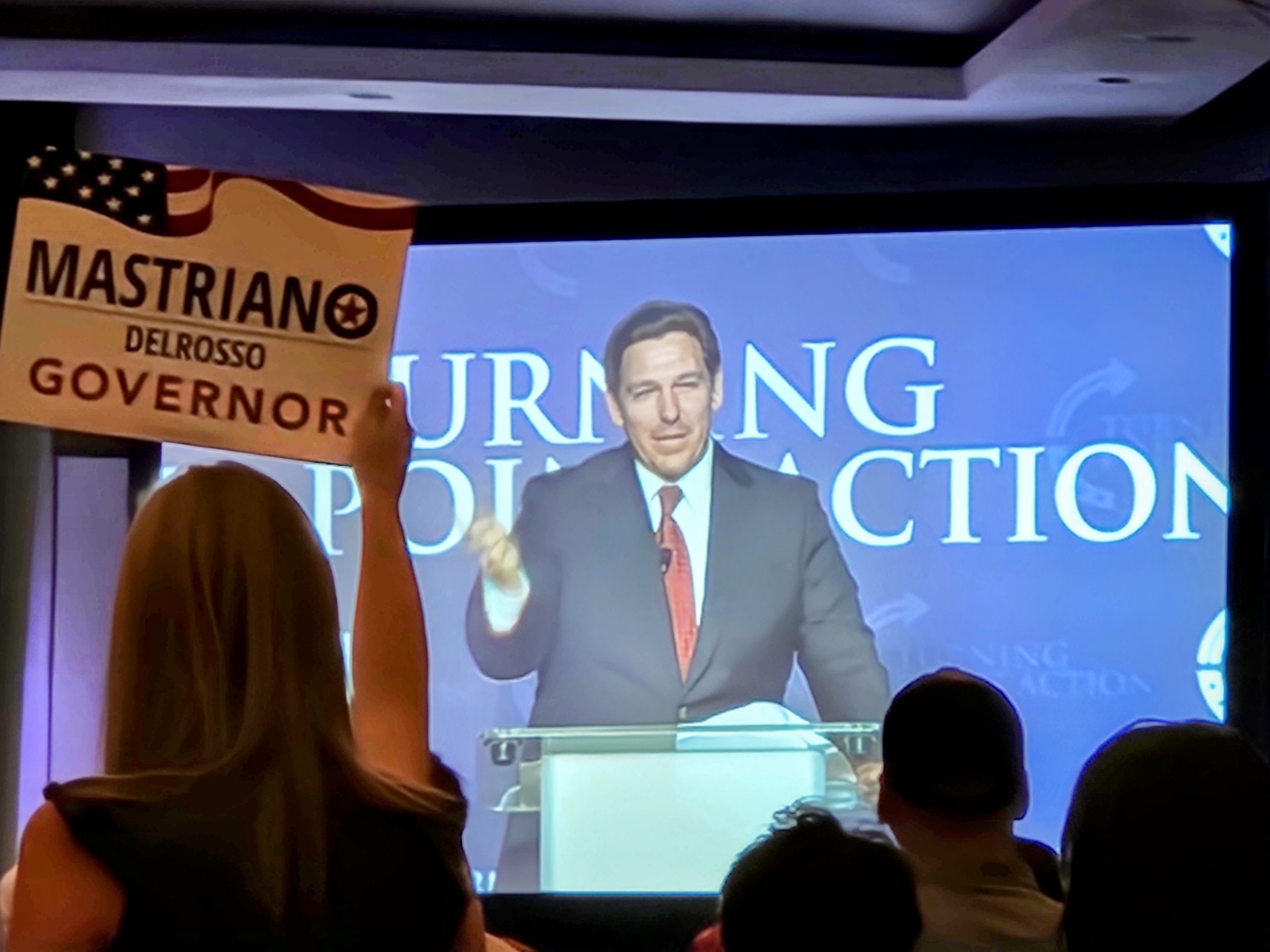 Pittsburgh
Fresh off the campaign stage in Arizona, where he stumped for gubernatorial candidate Kari Lake, Florida governor Ron DeSantis made his way to Pittsburgh for another Turning Point Action rally. This one was supposedly for Doug Mastriano (DeSantis was headed to Ohio for J.D. Vance right afterward), who’s challenging state attorney general Josh Shapiro to replace Democratic governor Tom Wolf — but his address sounded every word a DeSantis 2024 presidential speech.

The polls suggest Mastriano needs all the help he can get, as Shapiro — who has already spent $12 million on ads — leads...

Fresh off the campaign stage in Arizona, where he stumped for gubernatorial candidate Kari Lake, Florida governor Ron DeSantis made his way to Pittsburgh for another Turning Point Action rally. This one was supposedly for Doug Mastriano (DeSantis was headed to Ohio for J.D. Vance right afterward), who’s challenging state attorney general Josh Shapiro to replace Democratic governor Tom Wolf — but his address sounded every word a DeSantis 2024 presidential speech.

The polls suggest Mastriano needs all the help he can get, as Shapiro — who has already spent $12 million on ads — leads Mastriano — running a “shoestring campaign” — by a healthy margin (one recent poll has Shapiro leading by fifteen points). But DeSantis hardly mentioned Mastriano at all.

“America’s governor” (as DeSantis was introduced) started his thirty-five-minute monologue on the supremacy of Florida by letting the locals know he’s one of them. As a presidential hopeful would. DeSantis’s father is from nearby Aliquippa, and, having been born in the late 1970s during the Pittsburgh Steelers’ gridiron glory days, DeSantis is also a fan of the Black and Gold. He has a baby picture of himself in Steelers garb to prove it, which appeared on the big screen to cheers from the packed house of “yinzers” (another localism DeSantis employed for the occasion).

Next up was a slideshow of DeSantis’s greatest hits: a photo of the gov — looking pretty hot, I must say — with arms crossed in uniform in front of a Humvee taken during his younger military days. There was also a photo of him looking like Babe Ruth hitting a home run to remind everyone DeSantis played college baseball. What these anecdotes — or DeSantis’s prediction/warning that many in the audience will end up living in Florida — had to do with Mastriano is anyone’s (very obvious) guess.

DeSantis checked off every conservative talking point one by one, as if he were reading from a Newsmax viewers’ opinion survey and addressing every concern. He attacked Joe Biden and Nancy Pelosi and began or ended most sentences with “what we did in the State of Florida…” He spoke on the need to be tough on crime and unify in support for all Republicans, with a special shoutout to GOP Senate candidate Mehmet Oz.

DeSantis’s recurring focus, though, and the topic that got the loudest cheers, was battling Covid mandates and woke culture. He listed off the ways in which Florida has stood up to “the woke mob,” namely: by relinquishing the Disney Corporation’s special treatment in the wake of the Parental Rights in Education law uproar, banning Critical Race Theory in schools, promoting parents’ rights, establishing an initiative to educate children on American civics and to instruct kids on the consequences of communism “and how that has destroyed so many societies.”

DeSantis called the CRT ban the biggest issue his administration has worked on, saying schools need to “educate our kids [rather than] indoctrinate them” on matters such as “woke gender ideologies.” Returning time and again to matters that concern children, DeSantis spoke about the “mind virus” of woke ideologies “totally divorced from reality,” pointing as an example to Lia Thomas, the University of Pennsylvania transgender swimmer who swam on the men’s team for three years, only to become a champion after switching to the women’s team.

“We must never ever surrender to woke ideologies,” DeSantis said. “The State of Florida is where woke goes to die.”

DeSantis then went on to toot his own horn, subtly. Without naming names, he said, “A governor worth his salt is somebody who’s capable of being a leader, and there’s really no substitute for that. When you’re the governor, the buck stops with you.” He said the duty of a governor is to “stand up for people in your state,” adding that when he himself was elected governor, he didn’t do things based on polls, but made decisions “on conviction” and by “doing what’s right.”

DeSantis 2024 implied, the governor wrapped up with a “go get ’em!” closer on courage. As a political leader, you “have to be willing to show some courage to take on the woke mob, fighting cancel culture — that’s what is called for right now.”

“I get attacked when I roll out of bed in the morning,” he said nonchalantly. “I’m used to it. That’s just the cost of being engaged and standing for the truth. It’s worth it.”

We have an obligation to the people who fought for us to be a free country to keep up the good fight, DeSantis concluded. Mastriano gave a brief introductory speech for DeSantis, in which the not-super-articulate retired Army colonel with Bruce Willis vibes vowed to ban CRT, roll back a third of Wolf’s mandates, “fight like Hell for school choice,” end the Covid “jabs for jobs” rule, make bathrooms assigned to people’s anatomy, ensure election integrity and “have the backs of our beautiful law enforcement.” Most of his appearance, though, consisted of his wife speaking on women’s rights, and to DeSantis, Mastriano was an occasional, forced afterthought.

I asked about a dozen attendees whom they preferred run for president in 2024 — Trump or DeSantis? Most answered “Trump” without hesitation. One couple dithered and couldn’t provide an answer. One woman said she’d be happy with either one — “whoever can win.” And a couple people said they dream of a DeSantis/Trump ticket.

The Turning Point folks asked during the pre-speech pep rally of the event, “Are there ultra-MAGA conservatives here?” (the crowd went wild). And the Turning Point staffer checking press credentials had a sticker on his laptop of Donald Trump giving a thumbs up. As we were all being herded out of the venue, though, the group in front of me were discussing DeSantis. “He sounds presidential,” a thirty-something female said. Her companions agreed. A couple people I talked to said they don’t think Trump is “done yet,” that he was robbed of his presidency and still has more work to do.

There are NeverTrumpers, then there are Forever Trumpers. Whether Republicans are convinced of DeSantis 2024 is uncertain, but what is certain is that Ron DeSantis himself is assured of his prospects and intentions two years from now.