For Democrats, the Capitol assault was the gift that keeps on giving 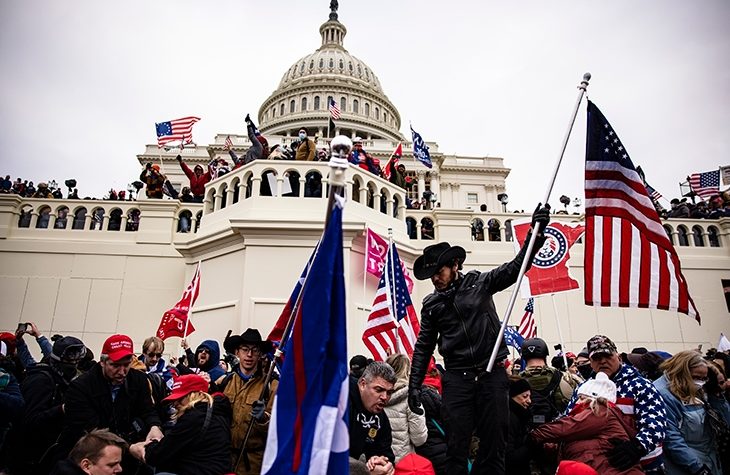 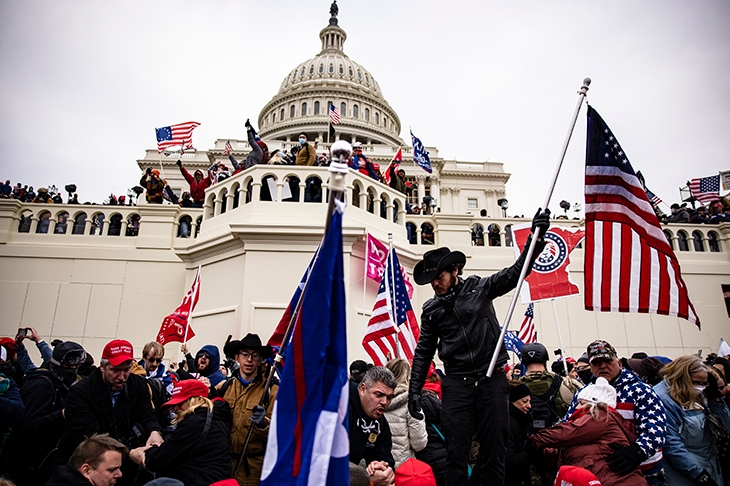 For Democrats, the Capitol assault was the gift that keeps on giving

As events recede, they change. When Donald Trump’s unhinged endgame culminated in a popular assault on the Capitol, most Americans of all political persuasions watched the improbable broadcast with genuine horror. Hell, yes, I was horrified myself. But as this month has advanced, and fears about my country disintegrating into anarchy have so far proved mercifully misplaced, lefty American commentators have progressed from anguish to glee.
The New York Times banners that assault on its pages pretty much every day. The still of scruffs in red hats climbing the facade of the Capitol is now a standard backdrop...

As events recede, they change. When Donald Trump’s unhinged endgame culminated in a popular assault on the Capitol, most Americans of all political persuasions watched the improbable broadcast with genuine horror. Hell, yes, I was horrified myself. But as this month has advanced, and fears about my country disintegrating into anarchy have so far proved mercifully misplaced, lefty American commentators have progressed from anguish to glee.

The New York Times banners that assault on its pages pretty much every day. The still of scruffs in red hats climbing the facade of the Capitol is now a standard backdrop on CNN. It must be thrilling to have your opponents do so much heavy lifting for your own team. For Democrats and the whole left-wing establishment now smugly back in charge of absolutely everything in the United States — the media, academia, publishing, the entire federal government, most of the courts bar the Supreme one, which can now be packed, of course — the shabby hoi polloi who smashed their way into this vaunted sacred space are the gift that keeps on giving.

As if having to take responsibility for the Trump presidency weren’t bad enough, the rampage gave the Republican party an additional PR black eye whose branching purple blotches won’t fade for years. The spectacle has proved so politically ruinous that some have seriously proposed that those ruffians were really special-ops Democratic apparatchiks in fancy dress.

Left-wing politicians and pundits alike have now designated the extremists who invaded the Capitol as brand ambassadors for the half of the US electorate who identify as conservative. So conservatives wave Confederate flags. They’re vandals, thieves and cop killers with no respect for the very institutions to which they profess fealty. They wear face paint and furry-tailed hats and big horns, and they prance around without shirts in January. They look stupid, and they’re too dumb to overthrow the government and remember to wear a coat. But most of all, they’re white supremacists.

Few expressions have been more abused in the past four years. The term used to mean something. Before Charlottesville, you could tell a white supremacist merely by charging ‘You’re a white supremacist!’ and they’d reply happily: ‘Fuck, yeah!’ But now ‘white supremacy’ references any situation where statistically whites seem to be thriving unduly (and never mind that East Asians and Indians out-earn white Americans; they’re now ‘white adjacent’ and don’t count), thereby becoming interchangeable with ‘systemic racism’. Latterly, ‘white supremacist’ has become a synonym for white, full stop. That’s right next door to completely meaningless.

Yet now that Trump’s deranged fringe has obligingly violated such a charged symbol of American democracy, the left has its supremacy both ways. On the one hand, the entire country is white supremacist. On the other, rare real live white supremacists of the old-school variety splashed on bus shelters by the FBI now give this abstraction a vivid face. Thanks to morons who break the law under the watchful eye of hundreds of surveillance cameras, and who take selfies while committing criminal offenses just in case any of those cameras might malfunction, the entire right-of-centre American electorate has been tarred with the same thuggish, malevolent brush.

Look. Any number of bona fide white supremacists were unquestionably on parade in DC on January 6. There is indeed a far right in the US. But I’ve yet to encounter convincing evidence that these proudly racist movements, which have form throughout American history, are exploding in size. Unless we include all 74 million Trump voters, it’s dubious that violent, seditious self-confessed bigots are numerous enough to justify a whole new domestic War on Terror, for which the Biden administration is already gearing up. Curiously, I never read that the operation will be aimed at the hard-left antifa rowdies still damaging government buildings and playing with matches in Seattle and Portland.

But if there were no real white supremacists, the American left would have to invent them. They are the perfect bogeymen for progressives insistent that the notorious culture wars are 100 percent about race. In the current Democratic paradigm, the primitive divide in America is between the nice people who truly believe that all men are created equal and the hideous people who believe that the darker-skinned are inferior. Frame the argument that way, and how can you lose? More than one guest on CNN has claimed that so many Trump supporters haven’t accepted the results of the election because they don’t believe blacks should be allowed to vote.

Such a simplistic Manichean outlook shuts down debate because, framed basically as a fight between good and evil, there is no debate. And there is no middle ground. We thus prevent any nuanced address of complex issues like immigration or the version of American history that schoolchildren are taught. You’re either with the left, on everything, or you hate black people.

As events recede, we can achieve more perspective, too. From a step back, the assault on the Capitol was as pathetic as it was appalling. Given the astonishing nature of the security lapse, it’s doubtful that the ragtag impromptu militia ever expected to get as far as they did. Once in the building, that crowd had no idea what to do with themselves. Some planning went into the attack, but clearly not enough. Surely the primary goal of this maneuver wasn’t to kidnap Nancy Pelosi’s podium. And a few of the miscreants having been caught with zip ties doesn’t demonstrate an intention to take the entire Congress hostage or to murder the legislators en masse, as if the Trumpsters had watched Designated Survivor on Netflix too many times. You’d never know it from the coverage, but this was not a coup.

Yet for the Joe and Kamala show, the assault will grow only more mythic, more outsized, more grandly near-calamitous. Those yahoos shouting ‘Hang Pence!’ and flaunting a Confederate flag will perform as useful idiots for the next 12 years of identitarian rule by de facto President Harris. I hope they’re pleased with themselves.