Decline and fall: why America always thinks it’s going the way of Rome

The many declines and falls of the American Empire 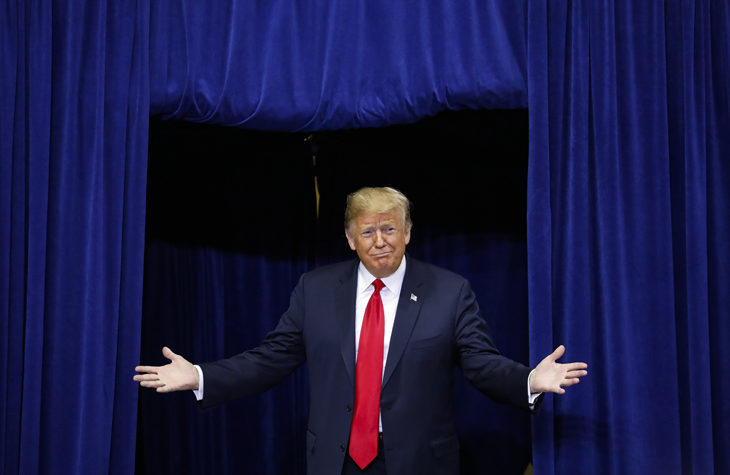 Decline and fall: why America always thinks it’s going the way of Rome

The vague sense that Rome fell because its rulers were decadent — no matter how divorced from historical reality such a myth may be — still lurks in...

The vague sense that Rome fell because its rulers were decadent — no matter how divorced from historical reality such a myth may be — still lurks in the public imagination. Bill Kristol, one of the most prominent Republicans to have joined the Never Trump movement, summed up the mood with a single dyspeptic tweet: ‘The speed with which we’re recapitulating the decline and fall of Rome is impressive. What took Rome centuries we’re achieving in months.’

Anxieties like these, of a Capitol humbled into the dust, of an America that will never be made great again, are nothing new. Today, in the wake of midterms that have demonstrated just how effectively Trump has weaponized immigration as an issue, the New York Times can describe his brand of identity politics as something that ‘has metastasized to states and districts across the country’; back in 1919, in the wake of the Russian Revolution, it was the New York Times that was fretting about Huns and Vandals. ‘The Roman Empire and its civilization,’ it sternly warned then, ‘were destroyed by barbarian hordes.’

Today, Americans fret that Trump’s critics dwell on his claim that the ranks of white nationalists include ‘some very fine people’; back in the decades before the Civil War, opponents of slavery cited the fall of Rome as a warning of what might happen to a society founded on societal injustice. Nothing, perhaps, has been quite so enduringly American as the conviction that the country is on the verge of decline and fall.

The sense of Roman history as a morality tale has been there from the very birth of the United States. Originally, Rome had been a monarchy; but then, inspired by a stern sense of patriotism and by a love of liberty, the people had risen up, expelled their king and established a republic. The appeal of such a narrative to the victors of the American Revolutionary War was very evident. Yet to admire the antique virtues of Rome, as the Founding Fathers certainly did, was to dread as well that it might all go wrong.

The Roman Republic had ended up collapsing under the weight of its own greatness; the autocracy of the Caesars had been planted on its rubble; Rome, no longer home to virtuous citizen-farmers, had become instead a city of excess and depravity and blood. Then had come the barbarians. Everything had collapsed. Rome, the caput mundi, had been left to weeds and silt and cows. Here, to any nation which could boast both a Senate and a Capitol Hill, was a warning from history that was almost bound to reverberate.

When Cassius, the assassin of Julius Caesar, fell in battle against Caesar’s supporters, he was saluted by Brutus, his fellow conspirator, as ‘the last of the Romans’. It was in a similar spirit that mourners gathered in September to bid farewell to John McCain, a man whose record as a soldier and a senator had an authentically Roman timbre.

His heroism as a prisoner of war in Vietnam, when he refused an offer of early release, was a theme worthy of Livy; his willingness, over the course of his entire political career, to place patriotism over party was a quality that Cicero might have lauded. ‘We gather to mourn the passing of American greatness — the real thing, not cheap rhetoric from men who’ll never come near the sacrifice he gave so willingly.’ So McCain’s daughter told the assembled dignitaries at his funeral. Nothing more authentically Roman than to weaponize a funeral.

Yet the very hatred which Trump inspires among elite circles in the United States marks him out — no less than McCain — as a type recognizable from the history of the Roman Republic. Political divisions in the age of Julius Caesar were a matter less of policy or ideology than of style. Senators who took a stance as defenders of traditional proprieties would define themselves against opponents whom they disparaged as ‘populares’: ‘populists’. The whiff of snobbery in this was evident from their self-description: ‘optimates’, ‘the best’. Yet a popularis, even as he would make a point of talking to ‘deplorables’ over the heads of the traditional elite, was liable to be no less wealthy, no less privileged, than an optimas. Caesar himself — the most successful of the populares — was infinitely more aristocratic than Cicero, a parvenu whose dogged traditionalism did not prevent him from being sneered at by the very upper classes whose interests he defended.

America, too, in the age of Trump, has become a country divided between optimates and populares. Less now seems to separate former presidents Clinton, Bush and Obama than joins them. The presence of all three at McCain’s funeral was seen as — and intended to be seen as — an attempt to marshal what the Romans would have termed ‘mos maiorum’, ‘ancestral custom’, against their successor. Yet such a strategy carries risks. The sense of an elite conspiracy only heightens the pleasure which Trump’s supporters take in seeing their popularis President humiliate distinguished authority figures.

Shock no less than awe can be turned to political advantage. Caesar understood this. When, during his first consulship, some of his supporters emptied a bucket of shit over his optimate colleague, the public response was hilarity as well as outrage. It was in a similar spirit that Trump rammed through the appointment to the Supreme Court of Brett Kavanaugh. Another president, concerned for the dignity of the constitution, might well have withdrawn the judge’s nomination. Trump, though, understands what Caesar knew as well: a leader detested by the guardians of tradition can afford to ignore them, and trample on tradition itself.

None of which, of course, is to cast Trump as a man gearing up to cross the Rubicon. The parallels, as they have ever done, serve to concentrate the mind; they do not foretell the future. The midterms have come and gone, and the republic still stands. Of only one thing can we be truly certain: other presidents after Trump will be elected, and they too will prompt sombre and anguished reflections on the decline and fall of the American republic.