As long as demand holds up, the debt will only deepen 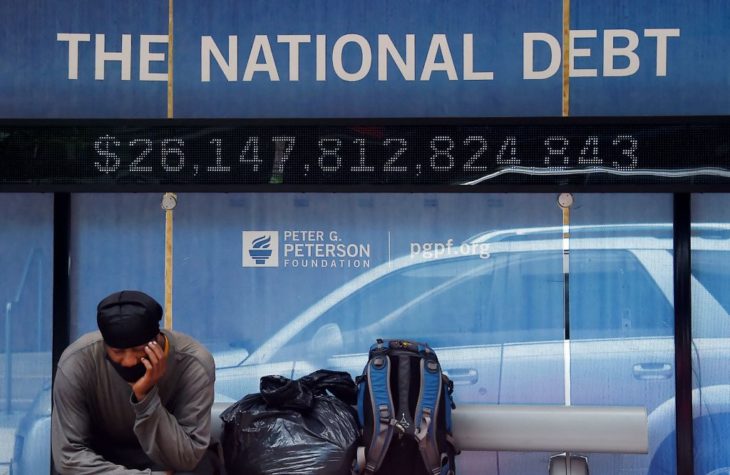 A man waits at a bus stop that displays the national debt of the United States, June 2020. It’s now approaching $28 trillion (Getty) 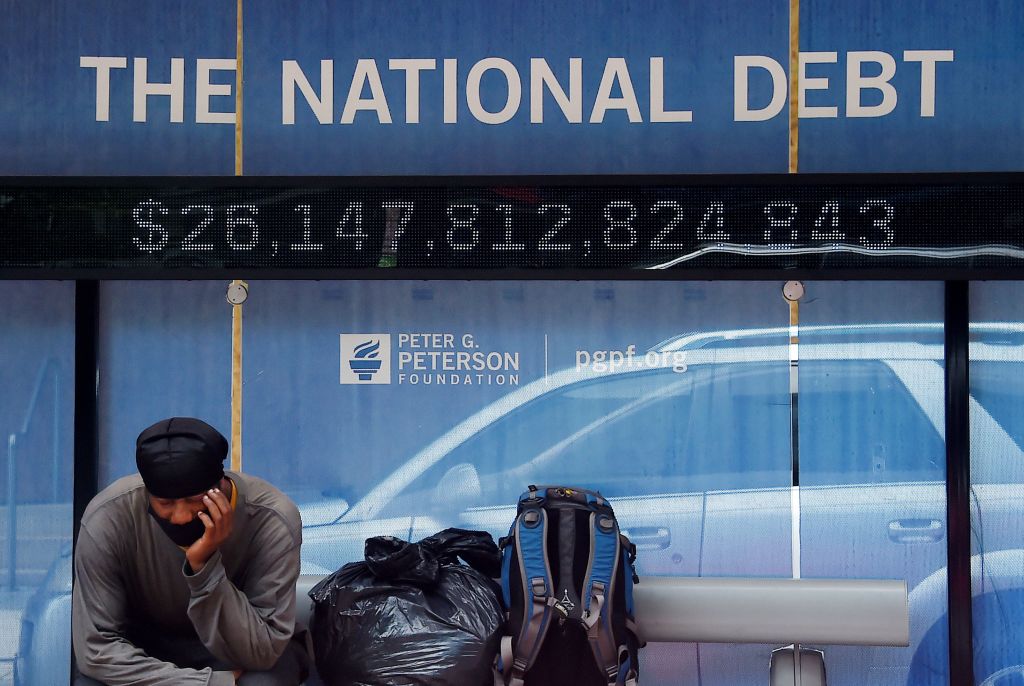 The US national debt is now in the neighborhood of $28 trillion. Some of that is money the government owes itself, but the publicly owned portion of the debt, some $21 trillion and counting, is roughly equal to the nation’s entire pre-COVID-19 domestic output for 2019 ($21.4 trillion). Republicans in Washington have already begun to sound the alarm over these figures — though, of course, far fewer of them were so outspoken about the debt when President Trump was the one running up the numbers. Is the mounting debt a threat to America’s way of...

The US national debt is now in the neighborhood of $28 trillion. Some of that is money the government owes itself, but the publicly owned portion of the debt, some $21 trillion and counting, is roughly equal to the nation’s entire pre-COVID-19 domestic output for 2019 ($21.4 trillion). Republicans in Washington have already begun to sound the alarm over these figures — though, of course, far fewer of them were so outspoken about the debt when President Trump was the one running up the numbers. Is the mounting debt a threat to America’s way of life or just a convenient stick with which to beat a Democratic administration?

Republicans tie the debt to spending. This crushing burden on the taxpayers of the future, they say, is a testament to the uncontrolled growth of government. And that’s true. But the national debt is also a result of Republican tax cuts. What Republican, or for that matter what ideological conservative or libertarian, is so serious about taming the debt that he’d support tax hikes as a way to get it under control? The ranks of such people are about as thin as the ranks of Democrats who would like to slash government services in order to reduce the debt.

There are principled reasons for this. Market conservatives and libertarians have great confidence in stimulus effects of lower taxes, and if the stimulus is great enough, you can grow your way out of debt. The debt might go up but the economy will positively skyrocket, thus keeping the ratio of debt to national income manageable. Democrats, progressives and liberals, for their part, believe the same thing about government spending: it will boost the economy, and that in turn will ease the debt burden.

Whatever principle might be worth, there are obvious political reasons, too, why national debt is a low-priority issue for both parties. Republicans win votes by cutting taxes; they don’t win them by cutting services. Democrats get votes by expanding services; they lose them by raising taxes. And to the extent that bipartisanship matters, are the parties going to agree on policies that politically hurt both of them — cutting services and raising taxes would really tackle the annual deficits that add to the debt — or will they agree on policies that help both of them: i.e., don’t raise taxes and don’t cut spending, or better yet, cut taxes and increase spending? The logic is clear. Sometimes Democrats do succeed in raising taxes, and sometimes Republicans cut back a little spending. Overall, though, both principled and political reasons point to an ever-expanding debt, along with an ever-expanding government.

This is one reason why conservative and libertarian arguments about big government don’t move the public very much. The problem with big government is not its cost, which is paid mostly by debt, but rather the benefits that government provides: benefits which may do more harm than good and which are always bundled with inhuman bureaucracy. These benefits, dubious or not, can be enjoyed at a very low cost to taxpayers, and that fact makes arguing for smaller government greatly challenging, if not absolutely futile.

Debt has to be paid sooner or later, though, doesn’t it? And what about the interest payments — won’t those eventually consume the federal budget, leaving no money for anything else? They won’t as long as interest rates are so low that they barely keep pace with inflation. And Uncle Sam has been rolling the debt load for decades, issuing new debt to cover the old. Investors keep buying. Foreign owners of the debt, particularly the Japanese (who owned about $1.29 trillion of it in July 2020) and the Chinese (about $1.07 trillion), get more press, but most of the public debt is owned by Americans: mutual funds, state and local governments, pension plans and insurance companies are all big purchasers.

The returns on US debt might be meager — again, with interest that barely stays ahead of inflation — but at least you don’t lose your money. These investors prefer a safe bet that pays little or nothing to a risky bet that could pay more. In the case of foreign investors, there are strategic motives as well. China, for example, takes dollars acquired from our purchase of Chinese goods and uses the money to buy US government debt. Market-minded advocates of free trade with communist China might want to reflect on how our trade deficit finances bigger government here at home.

One day the appetite for US debt might be exhausted. And when demand falls, interest rates must rise to bring the buyers back. As long as demand holds up, though, the debt will only deepen. Nobody turns down free money, and why would Uncle Sam cut services or bother voters with taxes when foreigners and domestic investors alike voluntarily hand over money now in return for nothing but a promise to pay later?

This paints a grim picture for small-government, pro-capitalist conservatives. Capitalism is fundamentally about risk, but not all human beings and human institutions have a tolerance for risk. They prefer security, in this case the security of their low-yield, government-backed investments. The money Washington takes in from selling its IOUs is put to work making voters more complacent and dependent: anesthetizing them to the sting of taxes and fostering a love of government generosity. This, too, is part of what it means to be a post-industrial economy. The demand for government debt reflects a lack of confidence in the security of private sector investment opportunities. Could a more robust free market provide such security, alongside riskier bets? The way global capitalism is evolving, the choice is between the casino and the bureaucracy. Neither of them is a model of productive enterprise.