Will coronavirus revive liberalism — or deliver it a fatal blow?

Some politicians, despite what they might have hoped, are only ever remembered for one thing. Coronavirus could easily become that ‘one thing’ for today’s leaders 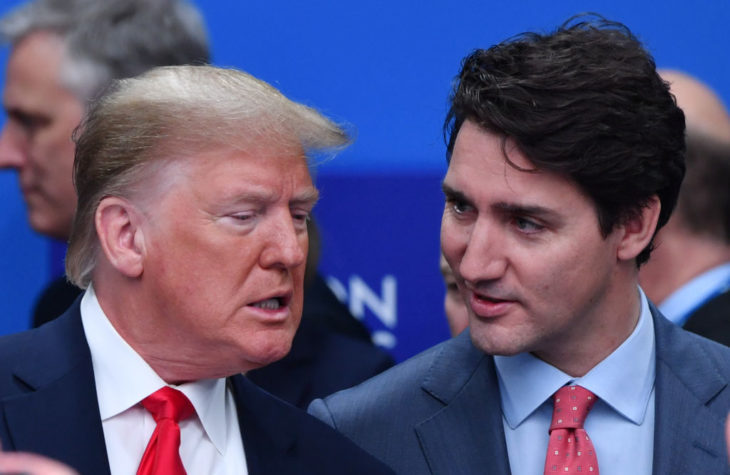 Donald Trump and Justin Trudeau at the 2019 Nato summit

Will coronavirus revive liberalism — or deliver it a fatal blow?

Politicians, said the historian A.J.P. Taylor, do not create the current of events. They can only float along with them and try to steer. But he was talking about the long contours of European history, not the sudden and shocking arrival of a global pandemic. How to float along and steer through something that looks like an overwhelming tsunami is, largely, unknown.
The outbreak of coronavirus has already put much of the world in lockdown. It has pushed the global economy into freefall, killed more than 13,000 people and could yet kill hundreds of thousands more,...

Politicians, said the historian A.J.P. Taylor, do not create the current of events. They can only float along with them and try to steer. But he was talking about the long contours of European history, not the sudden and shocking arrival of a global pandemic. How to float along and steer through something that looks like an overwhelming tsunami is, largely, unknown.

The outbreak of coronavirus has already put much of the world in lockdown. It has pushed the global economy into freefall, killed more than 13,000 people and could yet kill hundreds of thousands more, perhaps millions.

It will also have big political effects. Leaders, governments, even ideologies will be judged according to how well they meet the crisis and the fallout. Some politicians, despite what they might have hoped, are only ever remembered for one thing. Think Neville Chamberlain and appeasement. Jimmy Carter and Afghanistan. David Cameron and Brexit. Coronavirus could easily become that ‘one thing’ for today’s leaders.

So how will it impact on politics?

The short answer — the honest answer — is that we don’t really know.  But that should not stop us from asking questions that might help organize our thinking.

Here are a few for starters.

Will the crisis deliver another body blow — and potentially a fatal one — to globalization and the liberal world order, which has already been in retreat for much of the past decade?

Or will it provide a new raison d’être for liberalism, reviving public support for individual freedom and the argument that amid large-scale, global challenges like pandemics and climate change the only possible future is a multilateral one?

Will the crisis and its fallout, which is already hitting low-income workers the hardest, exacerbate the global populist backlash against incompetent and selfish elites?

Or will the arrival of a new ‘external enemy’, the first serious global threat since the end of the Cold War, focus minds on the need to build cross-class solidarity?

Will it sharpen divides between the wealthy winners of globalization — who have the economic security to flee into isolation, private healthcare and find shelter from the worst effects — and the ‘left-behinders’ who do not?

Will the bailouts and fiscal injections pave the way for a return of big government and economic interventionism, perhaps even a ‘post-COVID’ consensus that leaves more space for the state and less room for market liberalism?

Will the expected shrinking of the American economy by 24 percent in the second quarter, which is two and a half times the largest drop recorded in 1958, combined with the return of unemployment rates not seen since the Great Recession, demolish Donald Trump’s re-election hopes?

Or will talk of a ‘Chinese virus’ and the need to close borders remind us all that — at its core — politics is often less about lofty appeals to humanitarianism and more about the attribution of blame?

Or will it lead to new and imaginative responses to an already weakened global architecture?

Will the sudden appearance of a common threat finally end the escalating political polarization in America, and repair a divided Brexit Britain, or will the crisis become merely the latest issue to be seen through a partisan lens?

Will yet another crisis in the Eurozone — which is forecast to shrink between 10 to 15 percent through June — prove to be the final straw as exasperated voters in the South start to question the benefits of monetary union?

Or will north-south divides over redistribution and east-west divides over refugees and social liberalism finally give way for integration reforms and genuine solidarity?

Will the crisis accelerate a loss of public trust in experts and media, one of the touchstones of our populist age?

Or, conversely, will it restore public confidence in experts as politicians are forced to defer to medical and scientific expertise?

Will it exacerbate already visible intergenerational tensions between boomers and zoomers, with partying spring-breakers becoming a symbol of a social settlement that has lost any sense of moral obligation to fellow citizens?

Or will the sharp generational divides in suffering and fatalities fuel a renaissance, in our aging societies, of cross-generational cooperation, support and mutual respect?

Will social-distancing encourage our increasingly individualistic Western societies to ‘hunker down’ even more, pushing them into atomization and reviving fears about a collapse of social capital?

Or do the millions of new groupchats, and outpouring of volunteering, signal a much needed revival of communitarianism and civic culture?

We will not have answers to these questions for many years, much like it was impossible to accurately forecast the political effects of the Great Recession in the immediate shadow of the fall of Lehman Brothers in 2008. It is only today, more than a decade on from the start of the last financial crisis, that are able to stand back and survey the landscape. And it is perhaps helpful to return to the last crisis to make sense of the current one.

As research has shown, the decade after the last economic meltdown saw citizens become less trusting of politicians, less satisfied with democracy, more critical about the way it was working, less supportive of established parties, more supportive of populist outsiders and generally more volatile at elections (on the research see here, here and here).

A decade that started with a global financial crisis evolved into one that witnessed the rise of Donald Trump, Nigel Farage, Brexit, Matteo Salvini and Five Star in Italy, Bolsonaro in Brazil, López Obrador in Mexico, Modi in India, Syriza in Greece, Law and Justice in Poland, Babiš in the Czech Republic, Orbán in Hungary and Duterte in the Philippines, among others.

The financial crisis was not the only reason for their success but it played a part. And this was especially true in southern Europe, where the likes of Italy and Spain — which are now suffering some of the worst effects of coronavirus — saw a ‘double crisis’ that was both economic and political. The clear risk now is that coronavirus pushes some states into a ‘triple crisis’ focused on politics, economics and health.

Might things be different this time around? Will the effects of this crisis be different from the effects of the previous crisis? Maybe. One thing to keep in mind during the weeks ahead is the well-documented ‘rally effect’ — a tendency for citizens, when confronted with a big external threat, to ‘rally round’ their mainstream leaders and institutions. The famous example was a surge of support for George W. Bush after 9/11, something his father also experienced during Desert Storm.

Today we can already see how some leaders, most notably Giuseppe Conte in Italy but also those who have been criticized, like Boris Johnson and Donald Trump, have either seen their approval ratings increase or at least hold steady. Will these short-term effects last? We don’t really know.

Alongside leadership is the big pile of research showing that what really matters during moments like this — during big external shocks — are public perceptions of competence. ‘Is the government managing this crisis competently?’ It was New Labour’s failure to manage the financial crisis that paved the way for David Cameron, and it was then David Cameron’s failure to manage ‘immigration shock’ that paved the way for Brexit.

Much of this will be shaped by partisanship, especially in the United States. There are already real and significant differences in how Republicans and Democrats perceive this crisis. Elsewhere, it is likely that voters will trace this perceived competency to where their country stands compared to others.

Another thing to keep in mind is that we are all now sliding back down Maslow’s hierarchy of needs. The fact that people’s economic optimism has just crashed in the United Kingdom and United States reflects how, for millions of voters around the world, Maslow’s higher-level concerns about esteem, status and lifestyle issues are moving quickly into the rear-view mirror.

Instead, more fundamental concerns about economic security will return to the forefront — expect big debates about unemployment and jobs, taxation, inequality, redistribution and public services. This too could have big political implications given that, historically, economic hardship tends to benefit the left, not the right.

Might this point to a revival of center-left social democracy, left-wing populism or continued support for the already ascendant left-wing Greens in Europe? It is certainly possible. But given the past decade it is also not hard to see how new worries about economic and physical security could ‘fuse’ with their cultural counterparts — something that happened in the aftermath of the Great Recession.

One reason why left-wing parties did not profit from the last crisis, as they had from crises in the past, is because of how the Great Recession became entwined in the public mindset with cultural issues like immigration, borders, Islamist terrorism and the refugee crisis. All of this pushed liberalism into retreat.

Throw in the likely politicization of China — a debate that could easily move beyond economics and trade to competing values, behaviors and ways of life — and the end result could be a continuation of the more disruptive politics that we have come to expect.

Which of these competing scenarios will unfold?

Only time will tell.