What have you changed your mind on? 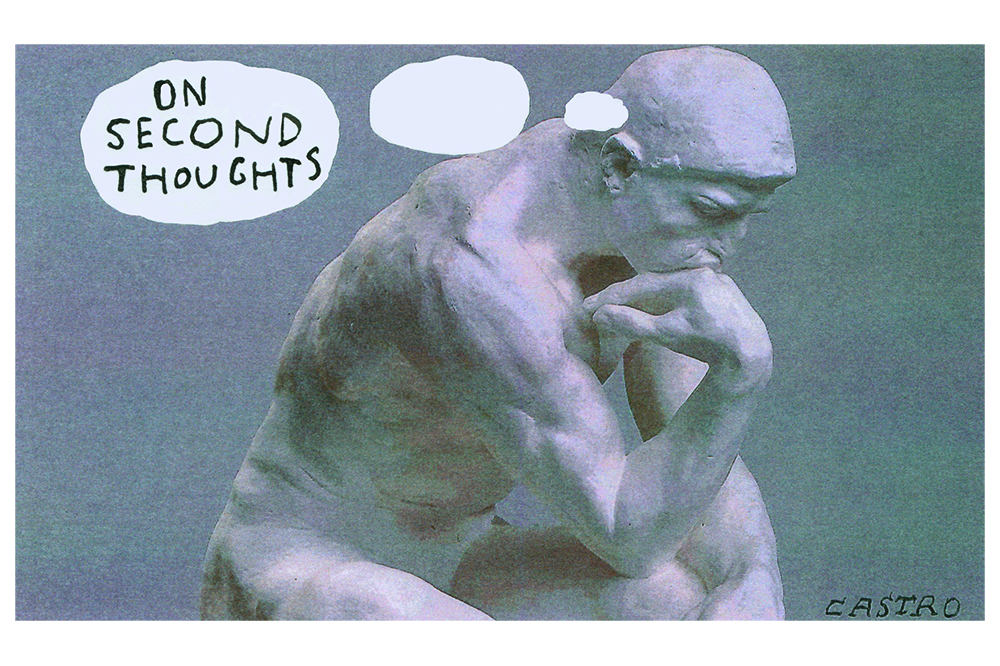 What have you changed your mind on?

By The Spectator
https://thespectator.com/topic/changed-mind-spectator-survey/
copy

This year, I have changed my mind about changing my mind. I used to do so freely as I grew older and wiser, or as new information presented itself. But more recently, I’ve opted to cling to stubborn prejudices, outmoded thinking and abject foolishness. Now that all objective facts have become debatable, my new attitude helps me fit in with The People, whom I love. And love means never having to say you’re sorry.
Boris Johnson
Britain’s prime minister

What I’ve really changed my mind on is whether it is possible to reset with Russia. I...

This year, I have changed my mind about changing my mind. I used to do so freely as I grew older and wiser, or as new information presented itself. But more recently, I’ve opted to cling to stubborn prejudices, outmoded thinking and abject foolishness. Now that all objective facts have become debatable, my new attitude helps me fit in with The People, whom I love. And love means never having to say you’re sorry.

What I’ve really changed my mind on is whether it is possible to reset with Russia. I really thought, as I think many foreign secretaries and prime ministers have thought before, that we could start again with Russia. That it’s a great country we fought with against fascism. It was very, very disappointing that I was wrong.

No doubt I’ve been wrong in my personal life and my political opinions but who cares about that? I care about science and will talk about an occasion where I was wrong in science. The Israeli biologist Amotz Zahavi proposed the ‘handicap principle’ to explain just about every aspect of the evolution of animal signals. It is most starkly expressed with the example of a sexual display, such as the peacock’s ‘tail’. Darwin recognized that such an extravagant ornament did not serve the animal’s own survival. Far from it. But females prefer to mate with males sporting huge and magnificent tails. So genes (Darwin didn’t talk in terms of genes) for being extravagantly beautiful get passed on to the next generation, and that’s why peacocks (and male birds of paradise, gaudy fish etc) look as they do. Sexual selection, Darwin called it.

Nobody doubts that peacock tails etc are a handicap to their owners. They are costly to grow and they attract predators just as they attract females. We all thought (me included) that they evolved that way in spite of being handicaps. Zahavi’s revolutionary idea was that they evolved that way precisely because they are handicaps. In the cute terms beloved of Zahavi: ‘Look at me, I’ve managed to survive in spite of carrying around this ridiculous burden of a tail, you’d better mate with me because I obviously have superb genes.’ Less anthropomorphically, advertisements have to be honestly costly or they carry no weight.

In the first edition of The Selfish Gene I ridiculed Zahavi’s idea (like almost all my fellow evolutionary theorists). I was wrong. I had to eat my words, for reasons spelled out in the second edition.

A rather important issue: the question of multiculturalism. Thirty years ago, I was anxious about the impact on Australia of people from very diverse cultures. But then, when I was running the group Australians for Constitutional Monarchy, I found to my surprise, and ultimately great satisfaction, that there were many, many people of very diverse cultural backgrounds who supported the monarchy in Australia very strongly. It was one of the reasons why they’d come to Australia: the stability, the continuity, the settled government that the monarchy in our country symbolizes. And that led me to an even stronger conclusion: that the vast majority of migrants are coming here to join us, not to change us.

Well, the gay marriage thing was something I changed my mind on. I was a slow learner on these things: that’s been my biggest change of heart. But on a lighter note, I’ve changed my mind about running. I once got hypnotized to give up smoking; two days later I suddenly decided to go for a run, and I’d never been on a run in my life. The hypnotist must have done something because ever since I’ve loved running. That was a very interesting change. But I need to go back for a bit more hypnosis.

I changed my mind about planning life. In the past two years life showed me its surprising potential, both in a very good way and in a very bad one. I gave up predictions and learned to go with the flow…when God blesses me with positivity, I embrace it with gratitude. When God gave me lemons, I learned to make juicy lemonade!

I used to think ‘faith’ was a set of beliefs, one I hadn’t got and didn’t know how to acquire. Then I thought, what if it’s more like hope — as when you say ‘I have faith my broken leg/ heart will mend’? Having revised my view, I was able to fall in with Theodore Parker and Martin Luther King: ‘The arc of the moral universe is long, but it bends towards justice.’

In 2016, I wrote an academic article called ‘The Most Knowledgeable Branch’. The article was a love letter to the executive branch, headed by the President of the United States. I argued that the executive branch, with its excellent civil servants, has much more information than Congress and the courts — which means (I thought) that in both domestic policy and foreign affairs, it should be given a lot of room to maneuver. I liked that idea so much that I signed a contract to write a whole book in its defense.

Oops. A few months after the election of Donald Trump, it became clear that even if civil servants are excellent and knowledgeable, the political whims of the president can create chaos and disaster. Civil servants might know that climate change poses serious risks, that new regulations would save lives on the highways, or that it doesn’t make a lot of sense to ask people about their citizenship on the United States census. But if the president is prepared to overrule its judgments, the most knowledgeable branch might be the most dangerous branch — and needs to be constrained.

I abandoned the book (and happily returned the modest advance).

During my 31-year career in the military, I lived and breathed by orders — the chain of command. But in my life since, as a father, teacher and politician, I’ve learned that people cannot be controlled: they can only be managed by incentives. Their nature can’t be changed. There are lessons in that for policymakers dealing with the major global issues of our time. We cannot merely mandate that people at home or abroad deal with an issue like climate change. We must find ways to incentivize them to deal with it, to understand that acting is in their own interest.

I change my mind and I sometimes change it back! Funnily enough, in 2011 I changed my mind about coalition with the Liberal Democrats when it happened. It ended up being a better government than I would have imagined beforehand.

If you’d asked me in 2008 or 2009: ‘Do you think this would be a good idea?’, I would have said ‘No, I think it is probably a dreadful idea.’ But in the end, for a variety of reasons, that worked out. I still think it was a good government. I prefer majority governments, though, I have to say.

I changed my mind over whether the Republican party would put party over country and continue to side with Trump. Prior to 2019, I naively believed that Republicans would wise up and stop short of being the Thelma to Trump’s Louise. Now, however, it is more apparent than ever that they are intent on driving their party (and potentially the country) straight off the cliff. They are fully committed to defending Trump and his conduct, no matter how abhorrent, and have allowed him to hijack their party.

History (and voters) will ultimately not be kind. But as Reagan turns over in his grave, the question is, will it be too late?

I’ve changed my mind on two things: 1) Trees. I used to think it was ludicrous when liberals chained themselves to some ancient redwood to keep timber companies from cutting it down. Now I think it’s God’s work. Unfortunately liberals no longer do it. 2) Trust-fund leftists. I used to consider them silly. Now I know they’re dangerous.