What can business learn from war leaders? 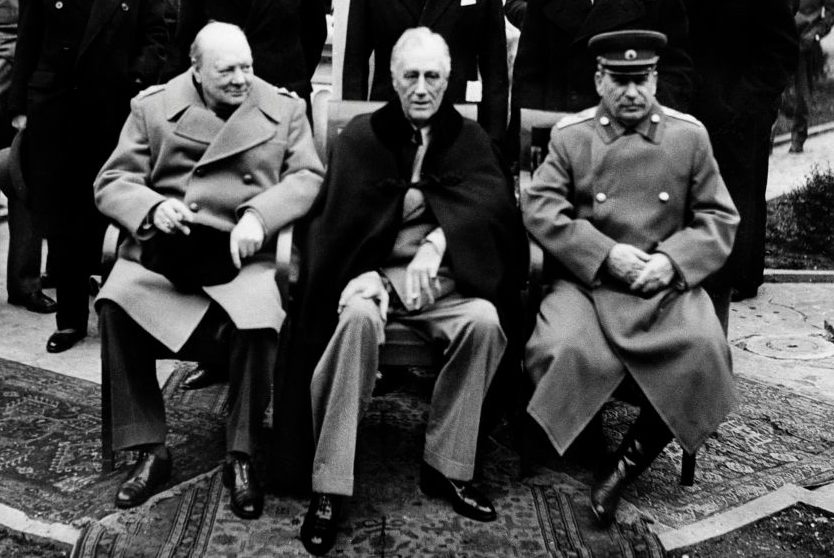 British Prime Minister Winston Churchill, US President Franklin Roosevelt and USSR Secretary general of the Soviet Communist Party Joseph Stalin pose at the start of the Conference of the Allied powers in Yalta, Crimea, on February 4, 1945 at the end of World War II. During the Yalta Conference, which took place from February 4 to 11, 1945, “The Big Three” (Stalin, Roosevelt, Churchill) decided the demilitarization and denazification of Germany and carved out their own post-war zones of influence across the globe. / AFP PHOTO / TASS / – (Photo credit should read -/AFP via Getty Images)

What can business learn from war leaders?

‘How can one person lead one hundred?’ That was among the questions offered in my university entrance exams in 1981 and, though I can’t now recall whether I tried to answer it, the question has fascinated me ever since. So when I was given the splendid opportunity of delivering nine Lehrman Institute lectures on military history at the New York Historical Society three years ago, I used them to try an answer, at least in terms of war leadership.

What became apparent was what a total waste of time and effort most of the modern ‘leadership...

‘How can one person lead one hundred?’ That was among the questions offered in my university entrance exams in 1981 and, though I can’t now recall whether I tried to answer it, the question has fascinated me ever since. So when I was given the splendid opportunity of delivering nine Lehrman Institute lectures on military history at the New York Historical Society three years ago, I used them to try an answer, at least in terms of war leadership.

What became apparent was what a total waste of time and effort most of the modern ‘leadership skills’ industry is whenever it applies the lessons of war leadership to anything else — and especially to business. You know the kind of thing: ‘Attila the Hun’s Top Ten Business Leadership Tips’, ‘What Operation Overlord Can Teach You About Running Your Company’ and so on. Leadership books, the motivational-speeches circuit, business videos and online courses are a multibillion-dollar industry, but they tend to impart next to nothing of genuine value when using war leadership as their template.

The ability to speak well in public, for example, is constantly promoted as important, although neither Napoleon nor Stalin were good orators. The leadership industry promotes the idea that it is important to be of upstanding moral character to motivate employees — witness the recent sacking of McDonald’s CEO Steve Easterbrook for dating an employee — whereas a glance at history shows that to be ludicrous. Napoleon had 27 mistresses.

‘Animal courage was the sole merit of Lord Nelson,’ said Lord St Vincent of Britain’s greatest naval commander, ‘his private character most disgraceful.’ When British prime minister David Lloyd George was asked if he was taking Mrs Lloyd George to the Paris Peace Conference after World War One, he replied: ‘Would you take sandwiches to a banquet?’

Like nuclear fission, war leadership is a powerful force that can be used for good or evil. It soon became clear in my researches for the lectures — which have now been turned into a short book, Leadership in War — that charisma is a totally artificial construct, something of a harlot’s trick. No one is born charismatic. If one is looking for the reasons that Adolf Hitler had charisma, one looks to Leni Riefenstahl’s movies, Albert Speer’s rallies and Joseph Goebbels’s propaganda, rather than anything inherent in the Führer himself.

Since democracies can’t censor the news in peacetime like they can in wartime — especially in existential struggles like World War Two — war leadership is necessarily going to be different from the kind of problems faced by peacetime politicians, let alone a CEO in the age of social media. Winston Churchill could simply censor the demoralizing news of the sinking of the RMS Lancastria with the loss of around 4,000 lives in June 1940; or the mass panic in Bethnal Green London Underground station which killed 173 people in March 1943; or the inadvertent massacre of 749 American soldiers during a D-Day rehearsal in April 1944. No peacetime leader could do that.

Some modern leadership studies claim that a sense of humor is important, but the absence of one did not stop Margaret Thatcher winning the Falklands War. Working hard is another staple of the leadership industry’s positive traits, but it doesn’t explain why Hitler did well in September 1939 and June 1941 when he was relatively lazy, whereas he did not do so well over the next four years when he was considerably more energetic and engaged.

One area in which modern leadership gurus do tend to get it right is when they emphasize how leaders must not consider setbacks as career-defining moments. Once I’d finished my lecture series — about Horatio Nelson, Napoleon Bonaparte, Winston Churchill, Charles de Gaulle, Joseph Stalin, Adolf Hitler, Dwight D. Eisenhower, George C. Marshall and Margaret Thatcher — I realized that the majority of them had spent time in prison. Nelson was of course profoundly physically disabled. Stalin spent four years in Siberian exile. Getting past such setbacks was a sign of the resilience needed for leadership, rather like the young CEO who regards early bankruptcy as merely a stage in his career.

What also became clear was how important their mid- to late-twenties were in my nine leaders’ lives: the period when they recognized in themselves a potential for greatness. Stalin was 28 when he helped to rob the Tiflis State Bank of the modern equivalent of more than $4 million. George Marshall was 27 when he graduated top of his class at the Army Staff College at Fort Leavenworth. Churchill was 25 when his escape from a prisoner-of-war camp in South Africa turned him into an international celebrity. Nelson was only 21 when he sailed up the San Juan river in Nicaragua and captured Castillo Viejo. (He had a head start on the others, having joined the Royal Navy at 12.)

Napoleon was 26 when he captured the bridge at Lodi during the Italian campaign, after which he said: ‘I no longer considered myself a mere general, but a man called upon to decide the fate of peoples.’ Margaret Thatcher was also 26 when she cut the Labour party’s majority in the electoral district of Dartford in the 1951 general election. Hitler won the Black Wound Badge and his second Iron Cross aged 29, a year older than Eisenhower was when he distinguished himself training tank crews at Camp Colt. These moments of self-realization about personal capacity gave each of them tremendous confidence at a key moment in their lives. Yet few modern leadership manuals are written for people in their mid-twenties.

‘Study history, study history,’ Churchill told James Humes — then an American student in England, later a presidential speechwriter. ‘In history lies all the secrets of statecraft.’ This is true, but history does not necessarily contain all the secrets of successful business leadership, despite a huge industry trying to persuade you that it does.