Will the Blue Wave hit a red wall in New Mexico? 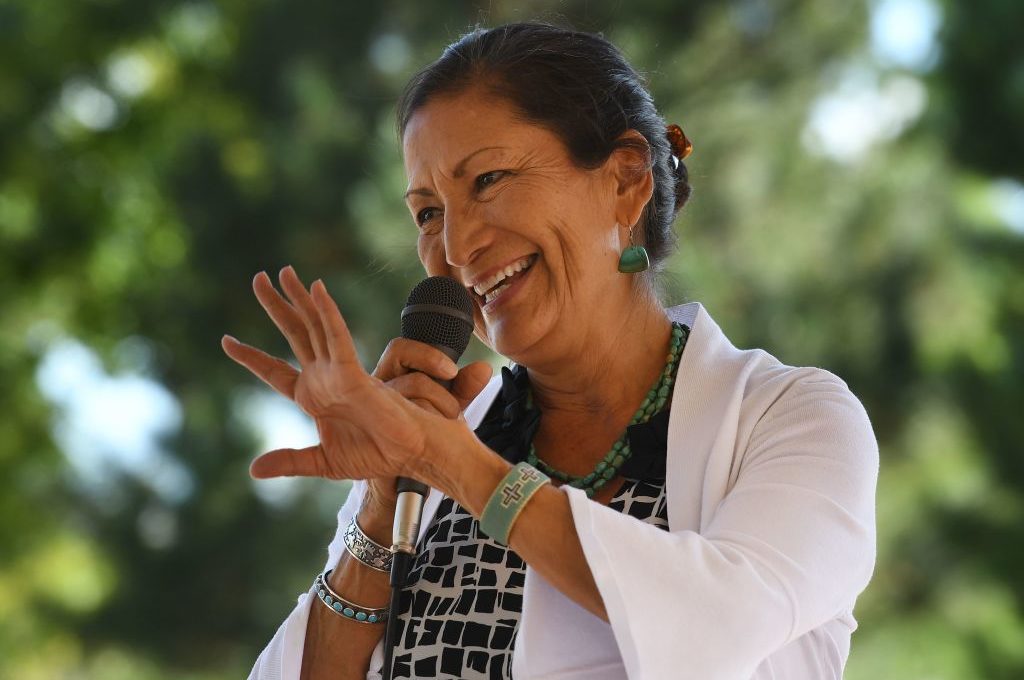 Native American candidate Deb Haaland who is running for Congress in New Mexico’s 1st congressional district seat for the upcoming mid-term elections, speaks in Albuquerque, New Mexico on October 1, 2018. – If Haaland is successful she will be the first Native American woman to hold a seat in the United States House of Representatives. The seat is currently held by Michelle Lujan Grisham who will now run for Governor of the state. (Photo by Mark RALSTON / AFP) (Photo credit should read MARK RALSTON/AFP/Getty Images)

Will the Blue Wave hit a red wall in New Mexico?

The only (future) presidential candidate I have ever encountered in a burlesque club – Manhattan’s The Box, if you must know – is Gary Johnson, a former two-term Republican governor of New Mexico, a slice of the Southwest that is like nowhere else in the US. We were attending an event organized by the publishers of the libertarian Reason magazine to celebrate the dismissal of obscenity charges against one of their donors, a pornographer.

If New Mexico is a state like no other, its former governor, socially liberal, a deficit hawk, and deeply suspicious of both income tax...

The only (future) presidential candidate I have ever encountered in a burlesque club – Manhattan’s The Box, if you must know – is Gary Johnson, a former two-term Republican governor of New Mexico, a slice of the Southwest that is like nowhere else in the US. We were attending an event organized by the publishers of the libertarian Reason magazine to celebrate the dismissal of obscenity charges against one of their donors, a pornographer.

If New Mexico is a state like no other, its former governor, socially liberal, a deficit hawk, and deeply suspicious of both income tax and military entanglements abroad, is a senior Republican politician like almost no other. Or was. Johnson began his 2012 run for the White House as a Republican and ended it as a Libertarian, winning just under 1 percent of the vote; not exactly a triumph, but the best Libertarian result since Ed Clark, 1980’s Mr. 1.06 percent.

Johnson tried again in 2016, taking over 3 percent of the vote (and 100 percent of mine), a feat that would have been impressive in any year in which Hillary Clinton and Donald Trump were not the opposition. Sadly, Johnson was not always on top form during the campaign, as when he asked, ‘What is Aleppo?’

Last year, one of his supporters, making a possibly unfair connection between that moment and Johnson’s performance at a town hall meeting in Santa Fe, remarked to me that Johnson might not be an ideal advertisement for a cause he has long endorsed, the legalization of marijuana.

Undaunted and unchanged – ‘young people,’ he has argued, are ‘getting fucked’ by rocketing government debt – Johnson made a late entry into this year’s Senate race. Pitching himself as ‘fiscally conservative and socially cool,’ and, conceivably, a swing vote in Washington, he has at times polled ahead of the Republican, ‘Hard Hat’ Mick Rich, a political novice who has built up a successful construction business.

There’s a case to be made that if Rich, who has never looked like a winner, had dropped out, then Johnson, a figure with some cross-party appeal, might have had a chance against incumbent Democrat Sen. Martin Heinrich.  As it is, the sharpened polarization of recent weeks appears to have left Johnson trailing Rich. Heinrich, a clear favorite even before Johnson entered the ring, will benefit from a split vote to romp home.

This shouldn’t be too much of a surprise. Historically, New Mexico, which is 49 percent Latino, has been more politically mixed than a crude reading of its demographics might suggest, but seems to be becoming a more reliably blue state, not least because of the increasing dominance of Albuquerque. With a population of around 560,000 – and the entire state has a little more than two million inhabitants – the Duke City is easily New Mexico’s largest.

Alberquerque’s most famous, if fictional, resident is Breaking Bad’s Walter White. A smart ‘left behind’, White might, if not for his unfortunate end, have been a MAGA man. But Albuquerque has been trending left for some years now. Deb Haaland, a ‘progressive’ candidate who stresses her Native American rather than her Norwegian-American heritage, looks set to succeed fellow Democrat Michelle Lujan Grisham as representative for New Mexico’s 1st Congressional District, which includes most of Albuquerque and its surrounds. Unusually for a state where Democrats tend to be moderate, Haaland promises to be ‘fierce.’

New Mexico has voted Democratic in every presidential election since 1992, other than in 2004, and it hasn’t had a GOP senator since 2009. Democrats control the state’s House of Representatives and Senate. On Tuesday, the Governor’s Mansion will fall into their hands too. Once, the term-limited Mexican-American Republican governor Susana Martinez was seen as the potential national ‘ethnic’ female candidate of GOP dreams; this was before the Nikki Haley ascendancy. Now, Martinez is leaving office with an approval rating in the mid-thirties. If polls and fundraising are any indication, she will be replaced by Michelle Lujan Grisham. The likely new governor’s extended Lujan family has played a prominent role in New Mexico politics, and on both sides of the aisle. For a large state, New Mexico is also a small state.

Lujan Grisham’s Republican opponent is Steve Pearce, currently the congressman for New Mexico’s 2nd Congressional district. This stretches across the state’s south, and includes a segment of Albuquerque and Democratic-leaning Las Cruces on the Mexican border. Pearce’s conservatism, including a birther moment, hasn’t hurt him in a district with a sizable Anglo majority and a south-eastern portion that’s close to Texas in more ways than one; many of the counties that opted for Trump are located in this corner of New Mexico. But that won’t help in a statewide campaign which, given Pearce’s lack of traction in Albuquerque, looks doomed.

Adding insult to injury, Pearce’s former district, despite voting for Trump in 2016, may now switch sides.  With a moderate Democrat posing a strong challenge, the outcome appears to be a toss-up. Both sides have poured in money from out-of-state and, following the alien lead – UFO, that is, not caravan – Vice-President Pence recently showed up in Roswell, in the 2nd district’s east. Pence called for two walls, one on the border – ‘Oh, we’re building it’ – and one against the Democrats: ‘Lets make sure [the blue wave] hits a red wall in New Mexico.’

The state’s other Congressional district, the 3rd, includes a significant Native American population; brainy Los Alamos; Taos, counter-cultural even before the hippies descended; and Santa Fe, a city offering a touch of Marin County amid the adobe. The 3rd district will return a Democrat as it has, with one slightly freakish exception, since its creation in 1983.  The district’s ‘deplorables’ are clustered around Farmington in northern, high-desert San Juan county. In 2016, this county went for Trump. Farmington remains a town where, one of Santa Fe’s few conservatives somewhat wistfully told me, it is possible to wear a Trump T-shirt in public. But Farmington will not be enough to make a difference.

With a Johnson miracle now beyond reach, the New Mexico result to look out for on Tuesday night will be the 2nd District. If the Democrats win that, the House could well be theirs by Wednesday morning.