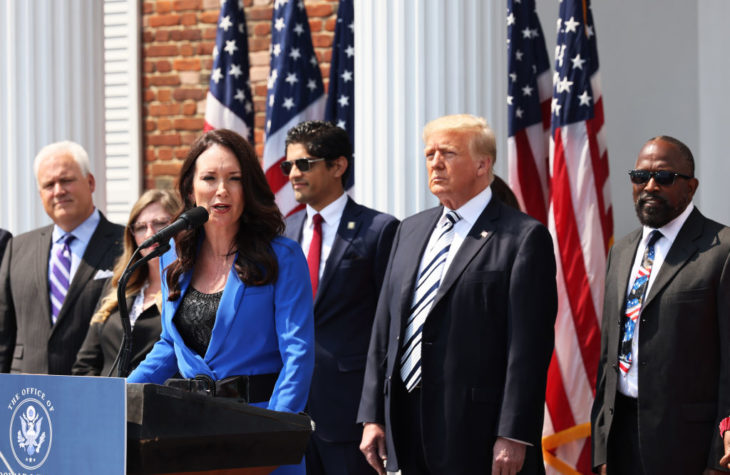 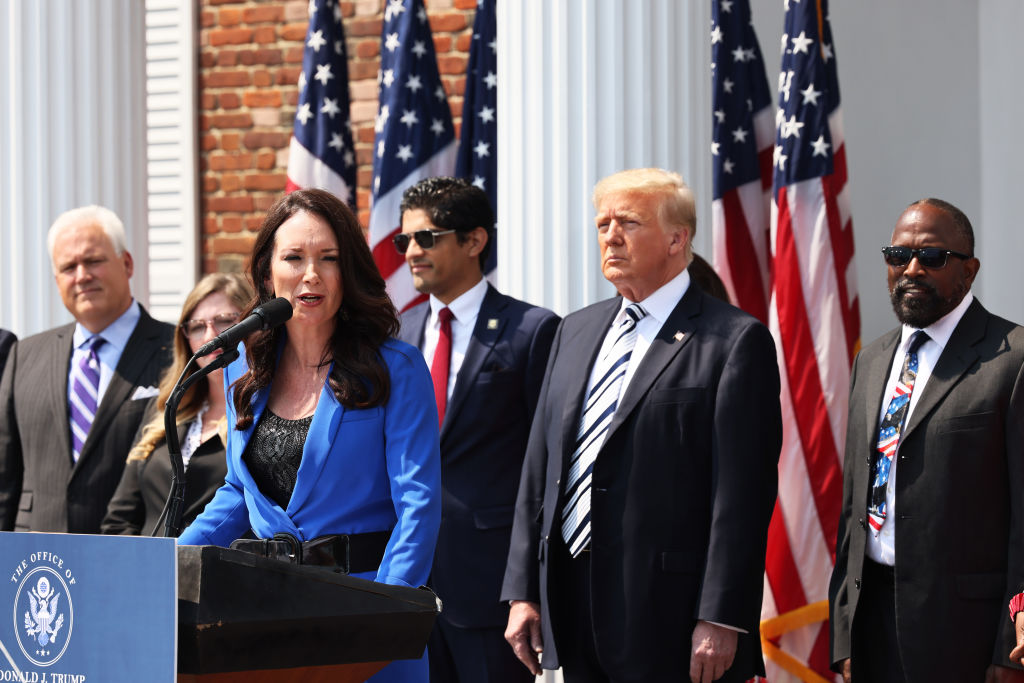 Two roads have diverged in the America First wood. On the one hand, the populist, grassroots, anti-establishment caravan; on the other, the establishment, grifter and, most importantly, official movement. The ironically named 'America First Policy Institute' and its dunces are leading the latter. Its newest ambassador, Daniel Di Martino, is illustrative of their type.

Di Martino is a Venezuelan immigrant and activist in the United States on a student visa, telling Americans that they're racist for disagreeing with him about how to run their country.

After then-president Donald Trump issued an immigration ban amid the pandemic last...

Two roads have diverged in the America First wood. On the one hand, the populist, grassroots, anti-establishment caravan; on the other, the establishment, grifter and, most importantly, official movement. The ironically named ‘America First Policy Institute’ and its dunces are leading the latter. Its newest ambassador, Daniel Di Martino, is illustrative of their type.

Di Martino is a Venezuelan immigrant and activist in the United States on a student visa, telling Americans that they’re racist for disagreeing with him about how to run their country.

After then-president Donald Trump issued an immigration ban amid the pandemic last year, the Daily Caller hosted a debate on its implications between populist author Ryan Girdusky and Di Martino. Shortly before that, Di Martino wrote in the Washington Times, ‘I’m afraid that Mr Trump’s immigration restrictions are transforming America from the welcoming, shining city on a hill I want to fight for into a dark, closed-off nation’. Unfortunately, Di Martino did not give up on the shining city and return to Venezuela or Spain, where he also holds citizenship.

Between his struggles to assemble points during the debate, Di Martino would assert that visa workers are simply more talented than Americans, dismissing all Girdusky’s evidence to the contrary. When Girdusky mentioned the human cost of the displacement of skilled American professionals by exploitable visa workers, Di Martino cracked a contemptuous smile. ‘These are real people with real families,’ said Girdusky. ‘That all sounds very good, Ryan, but it has no economic evidence behind it,’ replied the Venezuelan with a grin.

There’s no evidence, except for piles of data, the Disney workers replaced by foreign nationals who then-candidate Donald Trump campaigned alongside in 2016 and the corpses of American tech workers who killed themselves after humiliatingly training their incompetent foreign replacements for months before being handed a pink slip. Di Martino isn’t ignorant — he just looks down his nose at Americans, like most people at AFPI.

Leading up to his relationship with the official Trump think tank, Di Martino emerged on the scene as an interventionist and proponent of mass immigration — two of the main things against which Trump crusaded in 2016. He is dismissive of Americans who suspect the election may have been swayed by fraud and believes the only problem with pandemic lockdowns was that we didn’t do them hard enough. His byline in Bill Kristol’s latest failed publication, the Bulwark, proudly boasts his affiliation with the Koch-backed Young Voices organization and his Venezuelan citizenship. Indeed, in place of arguments, Di Martino likes to appeal to his nationality when calling for the deployment of US ‘military force’ to Venezuela or demanding America eradicate its borders — and if you disagree, he’ll likely call you a racist.

Nikki Haley’s populist critics? Racist. Republican Reps. Marjorie Taylor Greene and Paul Gosar? Racist. Tucker Carlson? Racist. The Federation for American Immigration Reform, a think tank whose associates took up positions within the Trump administration? Racist. Pro-Trump Twitter account the Columbia Bugle? ‘Nativist’…can you guess what he means by that? Former Trump senior adviser Stephen Miller? ‘Disgusting’ and basically racist. Trump himself? Well, Di Martino has complained that his criticisms of Mitch McConnell are ‘based on falsehoods about him and outright racist attacks because his wife is Asian’. Readers can draw their own conclusions.

Di Martino did not merely slip through the cracks. AFPI actively seeks out people who, like him, not only don’t care for populism and nationalism but hold those things in contempt. That’s no surprise, considering Brooke Rollins sits at the helm of the brain trust, such as it is, and Jared Kushner and Ivanka Trump advise it.

As a Kushner ally in the White House, Rollins was instrumental in pushing a soft-on-crime approach to deadly riots in 2020, the creation of the First Step Act — which released scores of dangerous criminals — reversing Trump’s ‘zero-tolerance‘ policy at the border, promoting amnesty and channeling corporate influence through the Office of American Innovation where she served before joining the Domestic Policy Council as acting director. Though Kushner is looking to open an office for his new investment firm in Israel to pursue regional investments, Rollins will keep up the good work of undermining an authentic America First agenda at home. She’s got plenty of help from people like Larry Kudlow, AFPI’s vice chair of the board.

Kudlow previously served as director of the National Economic Council. According to Trump’s trade adviser Peter Navarro, he played an important role in turning Trump away from investigating the origins of COVID-19. The New York Post‘s Sharri Markson recently revealed that Dr Anthony Fauci was scheduled to be hauled before a commission to give evidence about funding the Wuhan laboratory suspected of leaking the contagion. There were even plans to draft a bill demanding reparations from China for damages. ‘But the presidential commission was killed off during a meeting in the Oval Office where Trump’s economic advisers argued fiercely against it,’ wrote Markson. Navarro was furious. ‘Kudlow is just stupid, dumb. You can quote me on that,’ he said.

The divide between populist and nationalist Trump staffers, like Navarro, and establishmentarians in favor of more immigration, Big Business and soft-on-crime policies, like Rollins and Kudlow, runs through AFPI. If you were in the latter camp in the White House, your chances of ending up at AFPI increased. Javon Price is another example.

Price was formerly co-chair of Georgetown University’s chapter of Students for Trump and then served as director of external affairs with gen z gop, a vehemently anti-Trump Republican youth organization. He calls the GOP to move in a more progressive direction on social and cultural issues. White House staffers who worked with Price recall an antipathy toward social conservatives — a virtual precondition for a working relationship with AFPI. His interminable title — ‘Policy Analyst, Center for Opportunity Now; Center for Second Chances; And Center for American Security’ — raises the question: what do these people actually do?

The consensus from former Trump White House populist staffers is that when AFPI isn’t merely pushing the establishment line, it attaches itself to issues where others have already done the heavy lifting, then uses that to launder their grift without having a real product, diverting funds away from grassroots operations. Rollins’s AFPI lawsuit against tech companies is a typical example.

Standing beside Trump at a press conference, Rollins announced that people could ‘join the lawsuit’ by visiting ‘take on big tech dot com’. The problem is that the fine print on the website explicitly said that entering a name would not make the signatory a plaintiff. Visitors were instead redirected to a page for the Constitutional Leadership Partnership, a fundraising apparatus of AFPI led by former Florida attorney general Pam Bondi, who serves as AFPI’s chairman for the Constitutional Litigation Partnership.

AFPI’s director of the Center for Election Integrity, Hogan Gidley, has made a name for himself arguing Trump’s election fraud claims in the media. However, according to a former Trump administration official with strong ties to the campaign, Gidley doesn’t believe them himself. ‘I’ve never met someone so bad at trying to be duplicitous,’ the former official said. Multiple former staffers said Gidley’s ultimate aspiration is to be press secretary in a future administration; Hogan loves the limelight. At any rate, AFPI can now claim to be the spearhead of election integrity measures, thus soaking up money and attention that would otherwise go to grassroots efforts to secure independent election audits.

It is a curious thing that the greatest obstacle to an authentic populist and nationalist agenda is Trump himself and his coterie of hangers-on. There is still a thriving grassroots movement that hopes Trump will course-correct after all this time and shed himself of Rollins, Kudlow and Kushner. But that hope is a distant dream, especially when you consider who has Trump’s ear.

After the Trump-endorsed candidate Susan Wright lost a House special election in Texas on Tuesday, Trump confessed to Axios in an interview he was pressured to endorse Wright by the anti-tax Club for Growth. That same organization was among the first groups to launch an aggressive ad campaign against Trump in 2015. ‘Donald Trump is the worst Republican candidate on economic issues,’ said David McIntosh, the club’s president. ‘It’s astonishing that he’s even running as a Republican.’ Nearly as astonishing as how much things change. ‘They will fail!’ Trump fired back then. ‘Money down the drain!’

But money talks, Trump is listening and the AFPI is open for business.

Pedro L. Gonzalez is the associate editor at Chronicles: A Magazine of American Culture.