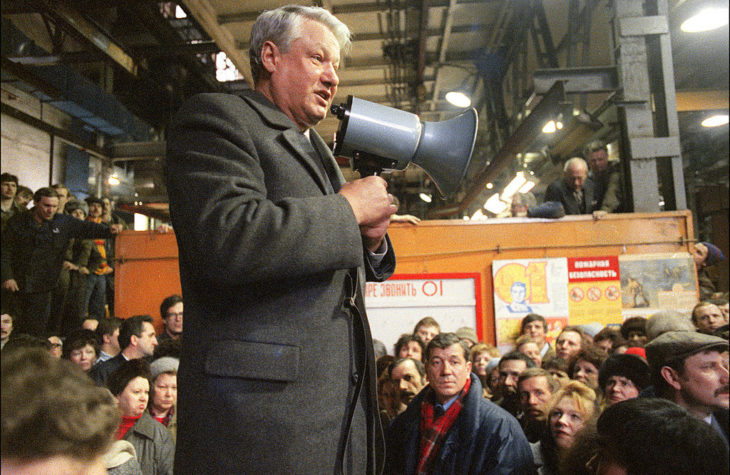 President Boris Yeltsin of Russia addresses a crowd of workers at the Kirov plant in Leningrad, March 1991 (Getty) 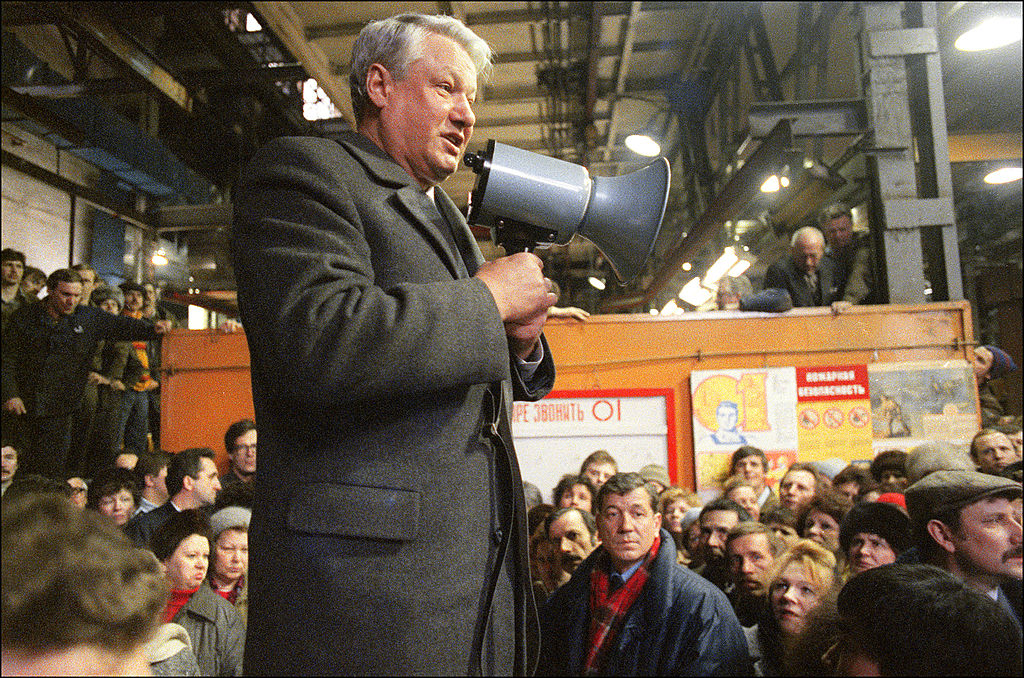 The end of the Cold War was as great a shock to US politics as it was to the Soviet Union’s. The Soviet regime didn’t survive, of course, and late 2021 will mark 30 years since the USSR dissolved. Mikhail Gorbachev had tried to save the Soviet system through reform. The Communist hardliners who briefly deposed him in the summer of 1991 tried to save it by rolling back reform. Neither sufficed — the regime, and the party and ideology at its heart, had lost their legitimacy irrevocably.

The first US presidential election after the collapse of the USSR almost rendered the same verdict on the regime in...

The end of the Cold War was as great a shock to US politics as it was to the Soviet Union’s. The Soviet regime didn’t survive, of course, and late 2021 will mark 30 years since the USSR dissolved. Mikhail Gorbachev had tried to save the Soviet system through reform. The Communist hardliners who briefly deposed him in the summer of 1991 tried to save it by rolling back reform. Neither sufficed — the regime, and the party and ideology at its heart, had lost their legitimacy irrevocably.

The first US presidential election after the collapse of the USSR almost rendered the same verdict on the regime in Washington. The 1992 election saw a populist challenge to President George H.W. Bush from within his own party. Pat Buchanan didn’t win any primaries, but his performance in the early contests suggested that up to a third of the GOP had lost faith in the incumbent. Buchanan not only took on Bush the politician, he assailed the politics of the Bush party: foreign interventionism of the sort that had seemingly gone so well in the Gulf War a year earlier; trade policies that had hurt American manufacturing jobs; and a lackluster commitment to fighting what Buchanan characterized as a ‘culture war’ with the ideological left.

Bush and Bushism survived the encounter with Buchanan only to face another populist insurgency in the general election. The billionaire H. Ross Perot was as unexpected an element in the 1992 contest as Donald Trump would be in the 2016 race. Perot imploded but Bush lost anyway. The man who beat him, Bill Clinton, was a self-styled New Democrat and, at just 46, the third-youngest president in history. The 1992 election was nowhere near as dramatic as the events that brought an end to the Soviet Union a year earlier. But in the US as in the USSR, the old politics had lost its grip on legitimacy. The public asked for a fresh start, if not, in our case, for a new constitution. The fall of the curtain on 42 years of Democratic control in the House of Representatives after the 1994 midterm elections drove home the point. An era had closed.

Yeltsin was something of a liberal, at least compared with what came after him. Since the end of the Cold War, America’s leadership has been nothing but liberal — left-liberal or neoliberal or, as some Republican publicists like to say, ‘classical liberal’, but liberal through and through. Even Trump was no radical departure from this: one of his signal achievements, after all, was a free-trade deal, the US-Mexico-Canada Agreement. He started no new wars, but the unwinnable old war in Afghanistan stretches into its 20th year.

Trump was the mildest of corrections to the failures of post-Cold War liberalism after a quarter century of its monopoly on American politics. Yet he was treated by liberals in the media and intelligentsia as if he were authoritarianism personified — and, of course, the puppet of an actual authoritarian in Moscow. If this is how American liberals respond to the least of populist reforms, one cannot expect our Yeltsin-like ruling class to so much as recognize its own mistakes, let alone atone for them.

Trump was never a danger to America. He was the only thing that could keep the system from devouring itself: the control rod forestalling an out-of-control nuclear reaction. The fact that Trump could be so personally outrageous should not distract from the real political outrages of the past 30 years. We have become the planet’s policeman even as leftists at home demand the defunding of police who keep our cities safe. From Kandahar to Chicago, American liberalism fails to establish self-sustaining order. What it has created, however, is an oligarchy whose share of national wealth only expands in good times or bad.

Along with the oligarchs of Wall Street and Silicon Valley, latter-day liberalism has empowered a clerisy of social-media censors with the power to restrict what you may see, hear or say. At the end of the Cold War, cyberspace was an open frontier. Today it is enclosed, even as legacy media are held hostage to the emotions of their newsrooms’ junior staff — young graduates left angry and narrow-minded after four (or more) years of highly expensive liberal education. So repellent is American Yeltsinism to its own offspring that they look to socialism for salvation. Soaring violence, chasmic inequality and class hatred mixed with racial identity amount to a formula all too familiar in other parts of the Americas. These are the wages of a liberalism that will not reconsider its oligarchic, globalist ways.

From Joe Biden to Nicolás Maduro is a long way. So is the path from our prolonged Yeltsin moment to a truly authoritarian reaction. America is not Russia: we are far richer, with a wider margin to indulge our ruling class’s excesses before the backlash. And yes, we also have more choice; that, too, is a luxury we can afford thanks to the security and prosperity handed down to us by the generations that prevailed in the Cold War and America’s earlier conflicts.

There is still time to find the leadership that this country needs to correct course after 30 years of drift. But the window for that opportunity inches shut year by year. The Democrats are creatively frozen under Biden, Kamala Harris, Nancy Pelosi and Charles Schumer. Not one of them represents a fresh idea: neither hope nor change. The Republicans can evolve if they take to heart not only the lessons of Trump but also those of the early 1990s, when two superpowers set themselves on a course from freedom to disaster.

This article was originally published in The Spectator’s January 2021 US edition.