There is a haunting beauty to their desolate vistas, an intimidatingly brutal type of splendor 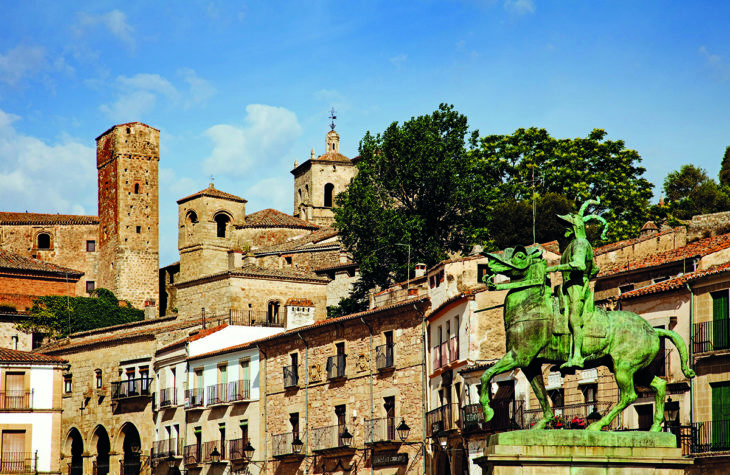 Extremities: the Pizarro monument in the Plaza Mayor, Trujillo 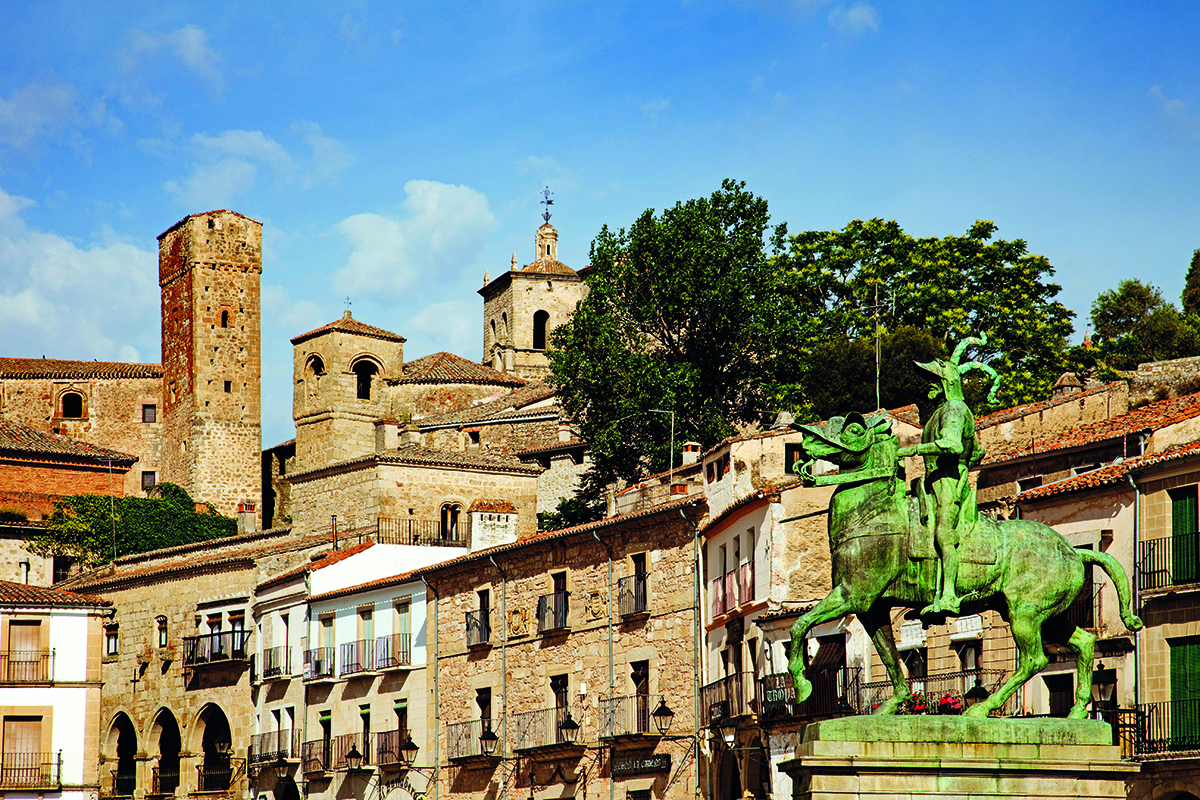 I haven’t come close to dying of thirst in Texas, where I live. In Spain’s little-known Extremadura, however, I found the odds increasing. Wandering through wide-open scrubland in hundred-degree temperatures, my only company was lots of Spanish bulls, unfazed by the blistering heat as I sweated my heart out. The population of Extremadura has been sparse since the Muslim occupation, but there are plenty of cattle.

As I headed north from Seville on the Via de la Plata, the latest leg of my extended Camino de Santiago pilgrimage crisscrossing the Iberian Peninsula, Extremadura struck me as remarkably...

I haven’t come close to dying of thirst in Texas, where I live. In Spain’s little-known Extremadura, however, I found the odds increasing. Wandering through wide-open scrubland in hundred-degree temperatures, my only company was lots of Spanish bulls, unfazed by the blistering heat as I sweated my heart out. The population of Extremadura has been sparse since the Muslim occupation, but there are plenty of cattle.

As I headed north from Seville on the Via de la Plata, the latest leg of my extended Camino de Santiago pilgrimage crisscrossing the Iberian Peninsula, Extremadura struck me as remarkably like Texas ranching country. Especially the swath of the southern Rio Grande Valley, where, unfortunately, some travelers do die of thirst after crossing the border with Mexico and continuing on foot through the arid landscape.

While it’s plenty hostile to human inhabitants, like the Texas outback, rural Extremadura is where the Spanish breed many of their bulls. This includes those mighty fighting brutes for Pamplona’s Running of the Bulls every July on the feast of San Fermín. What I would give to be there! 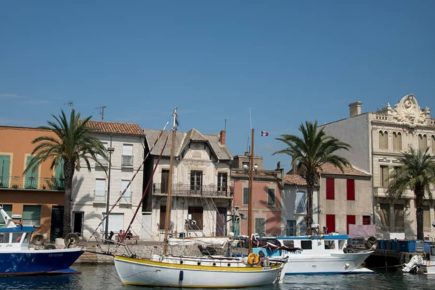 In the footsteps of Hemingway

“Really beautiful girls, gorgeous, bright shawls over their shoulders, dark, dark-eyed, black-lace mantillas over their hair, walk with their escorts in the crowds that pass from morning until night along the narrow walk that runs between inner and outer belts of café tables under the shade of the arcade out of the white glare of the Plaza de la Constitucion,” Ernest Hemingway wrote in his essay “Pamplona in July.” Even the bulls are beautiful, in a demented way, “galloping along, full tilt, heavy set, black, glistening, sinister, their horns bare, tossing their heads.”

It was too hot for my bulls, and I wasn’t as much of an exciting prospect as a mad Spaniard in white dashing down a tight alley, for them to pay me attention. They munched on, occasionally casting me dismissive looks. But I knew something of those mantilla-wearing, gorgeous dark-eyed girls I had seen promenading down the Calle de los Reyes Católicos outside my hostel in Seville, the beguiling capital city of southern Spain’s quixotic Andalusia region.

There is a haunting beauty to Extremadura’s desolate vistas, an intimidatingly brutal type of splendor, just as there is to those in Texas. I remember driving endlessly through empty Texas ranchland, desperate for any sign of populated life to offset the existential angst mushrooming in the face of the magnitude of nature versus my insignificance (not to mention the prospect of dealing with a flat tire). On the Texas Eagle train, plying the 1,306-mile route from Chicago to San Antonio, we passed through sprawling cattle ranches and small outposts holding out in the great expanse. Rumbling past wooden homes surrounded by the intimidating expanse of rural Texas, I could understand why some embrace the Second Amendment to have a shotgun close to hand.

If they’re not already put off by its lax gun laws, vegetarians will struggle in Texas — and quite likely in Extremadura too. In Texas it’s all about barbecue — brisket, ribs, smoked meats and well-seasoned sauces. In Extremadura the famed go-to staple is jamón ibérico — Iberian ham — courtesy of the pigs that delight in the sweet acorns (bellotas) falling from the trees.

“The oleic acid in the acorns on which the pig feeds makes the fat of the jamón ibérico de bellota one of the truly magical tastes sensations as it dissolves in your mouth,” Simon Majumdar writes in the Guardian. “The depth of flavor in the meat is like no other and the combination lingers like a fine wine.”

In Spain I stopped by a pen of these acorn-guzzling pigs for a swig of water, resting my rucksack on the chainlink fence. A group trotted over to me, sniffing eagerly as if I was one delectably long and lanky acorn. I got back on the trail, thinking of those stories about what the mafia sometimes use pigs for. Nothing is left, apparently. Extremadura — unlike Texas — is covered in the fingerprints of the Romans. Via de la Plata is littered with monuments and signs of Roman Hispania. In the middle of nowhere I suddenly found myself passing under an enormous Roman archway next to the ruins of a settlement. I arrived in Extremadura’s regional capital Mérida by crossing one of the world’s oldest surviving Roman bridges. I pottered around the Temple of Diana in the city center as people had their tasty tapas and cañas of cold beer at lunchtime.

In the middle of the giant Mérida amphitheater — a UNESCO World Heritage site — I imagined the ferocious gladiatorial battles that must have happened where I now stood ringed by ruins. And those early Christians given to the lions and bears for the entertainment of the baying crowds: not dissimilar to the amphitheater of US media and politics.

Texas, as others have noted, has soul. It is also a state of mind. But, for me as for Hemingway, there is something about Spain and its caminos that is always calling, even when I’m surrounded by the libertarian Texan charms of freewheeling Austin.

“Your heart felt good and you were proud of the weight of your rucksack,” Hemingway wrote about hiking in his memoir A Moveable Feast. While primarily about his formative literary years in Paris, the book also narrates trips to Spain. The country had a huge impact on his literary output, from For Whom the Bell Tolls to The Sun Also Rises to Death in the Afternoon.

“[T]he last good country left,” was how Hemingway once described Spain in a letter. I can see where he was coming from.