On the road to Mandalay

Ngapali, on the Bay of Bengal, is pronounced ‘Napoli’ and is said to be Burma’s answer to Naples 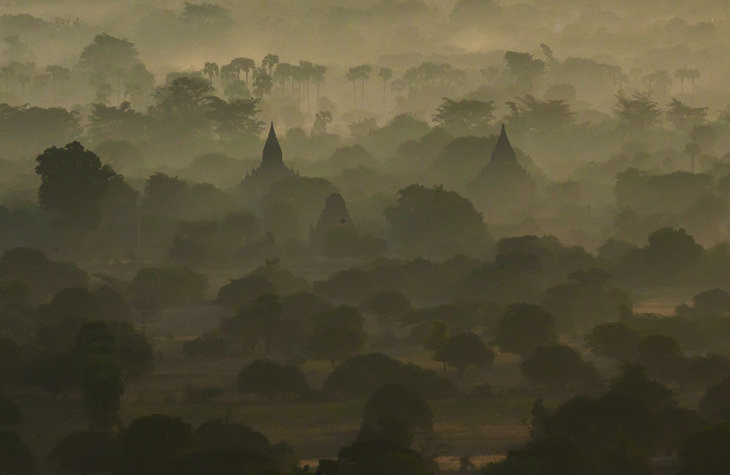 ‘When the dawn comes up like thunder’: The temples of Bagan, Myanmar (Mladen Antonov/Getty)

On the road to Mandalay

Traveling in Myanmar, it’s hard not to think of Rudyard Kipling’s immortal lines: ‘On the road to Mandalay,/ Where the flying fishes play.’

These days both Kipling and Myanmar (or Burma, as we still think of it) are out of favor. The mere mention of a visit elicits raised eyebrows and hisses of disbelief, though it seems that travelers can visit China, which is just as repressive, with impunity. But despite the disapproval, Myanmar retains its allure. Even the names are magical. Who wouldn’t want to take the road to Mandalay or sail the Irrawaddy?

Traveling in Myanmar, it’s hard not to think of Rudyard Kipling’s immortal lines: ‘On the road to Mandalay,/ Where the flying fishes play.’

These days both Kipling and Myanmar (or Burma, as we still think of it) are out of favor. The mere mention of a visit elicits raised eyebrows and hisses of disbelief, though it seems that travelers can visit China, which is just as repressive, with impunity. But despite the disapproval, Myanmar retains its allure. Even the names are magical. Who wouldn’t want to take the road to Mandalay or sail the Irrawaddy?

There were no flying fishes the day I arrived in Mandalay. The city is built on a grid plan surrounding the vast square grounds of the palace, where King Thibaw lived until he was ousted by the British in 1885, though there is not much of his palace left to see. I panted my way up 1,726 steps to the top of Mandalay Hill and paid my respects to the huge Buddha that stands there gazing down over the town. But the main attractions were two enormous bronze wish-fulfilling cobras garlanded with flowers, surrounded by baskets of offerings — mangoes, bananas — with bank notes crammed into their mouths by hopeful devotees.

Mandalay, on the banks of the Ayeyarwady (the Irrawaddy, as the British called it) is at the heart of the country. For 600 years there was a capital in this area, moving from one location to another as successive kings built new power-bases. Mandalay itself was the capital only from 1861. Around the city and across the Ayeyarwady are more old capitals. The most exquisite of all, Sagaing, was the capital around 1760. It covers an entire wooded hillside, studded with ethereal white and gold stupas with flame-like spires, quite magical to behold.

Myanmar is a land of temples, and the most spectacular of all are at Bagan. I’d decided to go by riverboat, an all-day trip down the Ayeyarwady. Well before dawn I scrambled down a steep sandy bank to the river, then picked my way along a gangplank, clutching a railing which was nothing but a bamboo pole with a lad at each end to hold it. At noon we stopped at a village shaded by spreading banyans, where cows and chickens and little white piglets roamed between stilted wooden houses. Smiling women with children on their laps or tied to their backs sat weaving straw to make ropes or hats. At one end of the village a group of men in lunghi sarongs and flip-flops squatted around a patch of bare earth, gazing intently at two scraggy cocks with black and blue feathers and lethal-looking claws. The cocks glowered at each other, then crashed together in a flurry of dust and feathers. The men pulled them apart but the second they let them go they were at each other’s throats again.

The dreamy journey continued. Late in the afternoon, peering intently ahead, I caught a glimpse of a pinnacle silhouetted against the sky. More and more appeared, getting closer and closer, until there were stupas crowding the horizon like a vision out of a fairy tale. We’d reached Bagan.

Here, the main tourist destination of the whole country, there would surely be a jetty with steps, I thought. But no. This time I had to cross a gangplank without even a railing, no matter how precarious, then scramble up another dusty sand bank.

Arriving in Bagan is to move yet further back in time to long before Mandalay or Sagaing were even thought of. It’s rolling country, a spreading plain dotted with groves of palm and tamarind set against the hazy gray of distant mountains. The temples here were built by the kings of Bagan between 1047, when Edward the Confessor was on the English throne, and 1287, when Edward I was ruling. The last kingdom was swept away, so legend has it, by Kublai Khan’s hordes of invading Mongols. Somehow these otherworldly temples, some 2,260 of the original 4,450, remain.

The only words we have in English are ‘temple’, ‘pagoda’ and ‘stupa’, none of which does justice to these extraordinary monuments. With so many temples to visit, you can spend days here. I explored the celebrated Schwezigon Pagoda with its tiered pagoda topped with a gilded stupa and gazed in awe at the Ananda Temple with its faceted gold sides, swelling and curvaceous like a giant corncob. I rambled the dark recesses of the Sulamani Temple painted with exquisite 12th-century murals depicting elephants, leopards and deer woven into scenes from the Buddhist scriptures.

But for me the best temples were the crumbling, seldom-visited ones, well off the beaten track, with grass growing out of the tiered roofs, each housing a Buddha with carvings of elephants, lions or monkeys guarding the four corners.

Bagan is a Unesco world heritage site. There are extraordinary temples to see and lacquerware to buy at bargain prices. But it’s empty. The Burmese have built beautiful hotels to welcome tourists, but the West still sees Myanmar as a pariah state. The hotels are half-empty, and the guides who are, as they tell me, just ordinary people trying to make a living, find it harder and harder to do so.

From Bagan I traveled on a little local airline to Ngapali. Ngapali, on the Bay of Bengal, is pronounced ‘Napoli’ and is said to be Burma’s answer to Naples. It’s an utterly perfect beach fringed with a forest of palm trees, with blue blue sea, a few wooded islands on the horizon and blissfully few tourists. Fishing boats rocked lazily on the water and most of the people around were fishermen standing barefoot on the rocks casting their nets.

I stayed in a lovely villa on the beach and had breakfast every day looking out over the smooth waters of the bay. In the evening I dined at one of the small local eateries along the road on wonderful fresh spicy seafood. One day I walked along the shoreline, past fishing boats tilted over on the sand or lying low in the water, to a fishing village. Then I saw a glint of gold in the distance. There was a temple there built on a rocky outcrop, with a gleaming golden stupa and pinnacles bedecked with flags and a stairway accessible only at low tide.

At sunset women in lunghis and colorful tops and sunhats walked along at the edge of the water. The sea was dotted with fishing boats. The next day bevies of monks in maroon and orange robes and shaven-headed nuns in pink suddenly appeared strolling along the beach. Some of the monks removed their robes, put them in a neat pile, stripped down to swimming trunks and plunged into the water. Others gathered on a spit of land that projected far out into the bay, laughing, chatting and playing with their mobiles. One, bolder than the rest, came over to me to practice his English. He reminded me that all young men in Burma become monks, some for a few weeks or a few months, others for a lifetime. It’s part of their education, part of their preparation for life.

I ended my visit in Yangon, previously Rangoon. It’s rundown, but it was still a rude return to the hustle and bustle of the modern world, full of traffic and traffic jams. I made the obligatory visit to a tea house for black tea with condensed milk and strange sweet pancakes and in the evening dined on spicy noodles at the local Shan Noodle restaurant.

On my last day, as evening fell, I went to the Schwedagon Pagoda, the greatest temple in the land. I walked barefoot around the vast stupa, admiring the ancient temple bell, trying not to stare at the monks, some deep in meditation, others playing with their mobiles. Around the central stupa there are images of animals dedicated to each day of the week. Following local practice I poured water over the tiger, the animal that governs Monday, the day I was born, and prayed for better times for Burma and the Burmese.

Leaving this land of golden pagodas I thought of Kipling’s lines again. Politically incorrect though he’s now deemed to be, he conjures up perfectly the magic of Burma and the siren call of the east: ‘Come you back to Mandalay.’

This article was originally published in The Spectator’s December 2020 US edition.