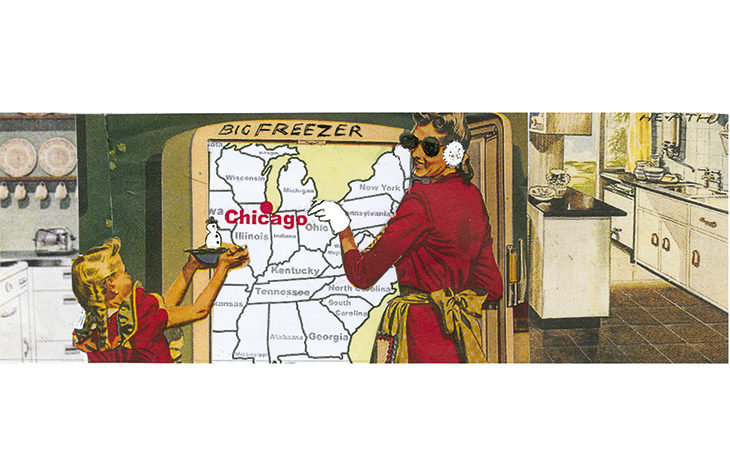 One of the few pleasures of advancing age is that, no matter how awful some looming catastrophe may be, you can always remember a time that was worse. On hearing the polar vortex was headed for Chicago last week, my wife and I smugly reminisced about having survived the coldest night in the city’s history — January 20 1985 — when the mercury fell to -27ºF. Spurning the temptation to huddle beneath blankets, we went out for deep-dish pizza, thinking we’d have the joint to ourselves. On the contrary, it was packed. We had to...

One of the few pleasures of advancing age is that, no matter how awful some looming catastrophe may be, you can always remember a time that was worse. On hearing the polar vortex was headed for Chicago last week, my wife and I smugly reminisced about having survived the coldest night in the city’s history — January 20 1985 — when the mercury fell to -27ºF. Spurning the temptation to huddle beneath blankets, we went out for deep-dish pizza, thinking we’d have the joint to ourselves. On the contrary, it was packed. We had to stand in line, mercifully in the unheated vestibule rather than the sidewalk. We had a blast. ‘Let’s see if they can top that,’ I said to my wife this time around. They didn’t. The temperature bottomed out last Wednesday at -23ºF. Still, I acknowledge, this is brisk. The North and South Poles were reportedly warmer. Most schools cancelled classes; businesses closed for the day. My wife and I went out only to walk the dog, bundling up in multiple layers of technologically advanced insulating materials beforehand. Even so, our eyes came close to freezing in their sockets after a hundred yards. Thursday was modestly better. The low was -21ºF, and that was at O’Hare Airport, out on the industrial prairie. By Lake Michigan, where we are, it was a comparatively sizzling -11ºF, and by midday it had warmed up to maybe -2ºF.

Here I must pause. The US is one of the few countries on earth still using the Fahrenheit scale, on which the freezing point is quaintly set at 32. The others — this is the complete list — are the Bahamas, Belize, the Cayman Islands, and Palau. I’d quietly convert all readings to Celsius but for the fact that Fahrenheit is deeply embedded in American notions of temperature. An expensive brand of refrigerator here is Sub-Zero, which to Americans means breathtakingly cold and thus worthy of the price. To the rest of the world, the name suggests merely that the freezer is capable of freezing, which seems like a low bar. Similarly, if I say Chicago last week endured 52 consecutive hours of sub-zero temperatures, as was prominently reported, you may wonder why all the drama. If instead I say we lived through 52 hours of sub -17.7ºC… ah, it’s hopeless. Take my word for it: it was fricking cold.

Chicago tends to be the go-to town for cold-weather stories, but on behalf of the local tourism industry let me say it’s not the coldest major city in the world or even in the US. My in-laws live in Saint Paul, Minnesota, which got down to -27ºF last week. OK, not that much colder than Chicago, but my sister-in-law tells me -30ºF occasions little comment among her neighbors other than ‘ah, yup, it’s chilly’ and the record is -34ºF. The all-time low for Minnesota is -60ºF. So let’s keep things in perspective.

Still, Chicago may fairly be said to be the coldest US city where ‘normal’ people live, meaning that while we bear the winters gamely, we’re perfectly happy to have it warm up. Indeed — I dare not say this above a whisper — we’re one of the few global constituencies secretly rooting for climate change, on the theory that any adjustment to what we have is bound to be an improvement. Admittedly, it may be a while coming. We’re told that the recent nip was a consequence of rapid warming of the poles, causing the big mama vortex that normally keeps cold confined to the Arctic to devolve sometimes into wandering baby vortices that drag the frigid temperatures into the lower reaches. Nonetheless, we figure any boreal hotting up has got to play out to our advantage eventually.

Setbacks in the meantime we view with equanimity. Our children, who have scattered to the coasts, text us apprehensively: ‘Are you still alive?’ We’re fine, we reply. And so we are. It’s 47ºF as I write. The snow (we had plenty of that, too) is melting. Soon there will be no trace. Whereas the wildfires, hurricanes and floods afflicting other parts of the world, arguably also due to climate change, have more lasting effects.

A narrow view, I know. But look at it from our standpoint. Chicago sits at 42 degrees north latitude, about the same as Barcelona. The daily highs in Barcelona will be mostly in the 60s. Here… well, the weather will be better than the week just past. But it’s still wintry. This strikes us as unfair and deserving of redress. When we get sustained stretches in the upper 60s and 70s in February, or in the 80s in March, as happened in 2017 and 2012 respectively — weather unknown in the Chicago of my youth — forgive us for thinking: give us an end to global warming, but not yet.