Under the czars and the communists, Georgia was where Russians went to party 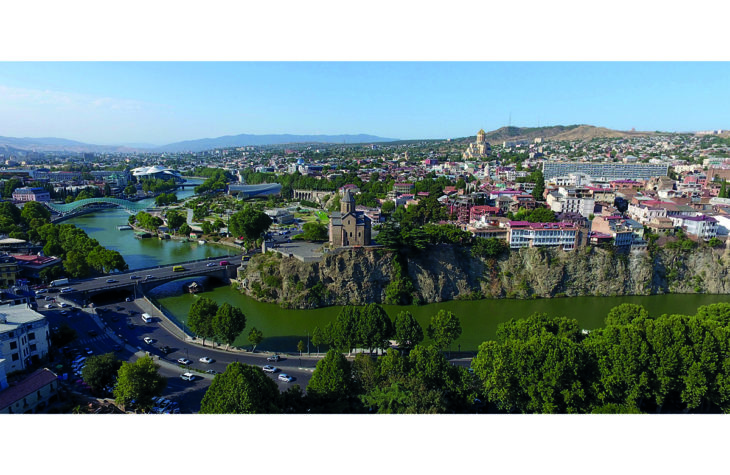 Georgia on my mind: Tbilisi from the air

‘These regions are not under the control of the central government,’ reads a warning on a map in the bustling center of Georgia’s capital, Tbilisi. ‘Traveling to these regions is not advisable.’

One of these regions is Abkhazia, only a few hours’ drive away. The other is South Ossetia, barely an hour from here. Since 2008 both have been occupied by Russian troops, in defiance of the Georgian government. Yet here in Tbilisi, tourism is booming, and many of the tourists are Russians.

This neat irony encapsulates what makes Tbilisi such a fascinating city, a looking-glass metropolis...

‘These regions are not under the control of the central government,’ reads a warning on a map in the bustling center of Georgia’s capital, Tbilisi. ‘Traveling to these regions is not advisable.’

One of these regions is Abkhazia, only a few hours’ drive away. The other is South Ossetia, barely an hour from here. Since 2008 both have been occupied by Russian troops, in defiance of the Georgian government. Yet here in Tbilisi, tourism is booming, and many of the tourists are Russians.

This neat irony encapsulates what makes Tbilisi such a fascinating city, a looking-glass metropolis in which nothing is quite what it seems. European Union flags fly alongside Georgian flags outside and inside government buildings, not because Georgia is a member of the European Union, but because it wants to be. Likewise, when I visited this year the lampposts were festooned with Nato banners — not because Georgia is a Nato member, but because it wants to join.

Georgia is a Eurasian no man’s land, stranded between East and West. It’s always looked towards Europe, but Russia has hugged it closer. The czars colonized Georgia and, after a brief period of independence between 1917 and 1921, so did the Soviets. When the USSR fell apart, the Georgians regained their sovereignty, but Russia was loath to let them go.

Georgia seeks Nato membership to keep the Russian bear at bay, but the last thing Vladimir Putin wants is a new Nato member on his southern border. The Russian-backed separatist movements in Abkhazia and South Ossetia allow Putin to keep Georgia close. Nato can’t grant Georgia membership while Russian troops remain on Georgian soil, so, for the foreseeable future, those troops are here to stay.

I’d come to observe a Nato exercise, led (for the first time) by the Georgians, in which Georgian forces were working alongside troops from members including Britain. I met the Georgian defense minister and the Georgian foreign minister. I saw Nato secretary-general Jens Stoltenberg meet Georgian veterans of Nato peacekeeping missions in Afghanistan, a somber ensemble of amputees. Between meetings I wandered the streets of Tbilisi, marveling at its rich mix of occidental and oriental. Strolling along its broad boulevards, you could almost be in Paris. Duck down its winding side streets and you feel a long way east.

An even bigger divide is between ancient and modern: hole-in-the-wall ethnic eateries and American fast food outlets are often side by side. Walk a few blocks in any direction and you’ll see the architecture lurch abruptly, from shiny modernism to shanty town and back again. But the biggest culture clash is generational, between younger, English-speaking Georgians who’ve only known independence and are outward-looking and optimistic, and the older, Russian-speaking Georgians who grew up under the USSR. If you were young when the Soviet Union collapsed, it was a fantastic opportunity. Life opened up for you. If you were too old to retrain or start again, it was a disaster.

Putin’s motive for keeping his claws in Georgia may be purely geopolitical, but ordinary Russians have a more sentimental attachment to this former Soviet Republic. Under the czars and the communists, Georgia was where Russians went to party. It had the best wine, the best weather, the best beaches, the best food. ‘I loved Tbilisi more than any other town in the Soviet Union because it was still so untouched by the drabness and monotony of Soviet life,’ said Arthur Koestler. ‘The town has an irresistible charm of its own — neither European nor Asiatic, but a happy blend of the two.’

This happy blend is still evident, despite the Russian soldiers on Tbilisi’s doorstep. My Nato guide was an Icelandic woman who was posted here last year. It was clear that she loved living here. She took me to a restaurant called Old Metekhi, perched on a cliff above the winding river, overlooking the sprawling city down below. There was music and dancing, guaranteed to give me indigestion, and more courses than I could count, washed down with fiery red wine. The cuisine, like the culture, is a mélange of Russian and Turkish. The starters were so large I assumed they were the main courses. By the time my actual main course arrived, I was already stuffed.

Fitzroy Maclean (allegedly a model for James Bond) came to Tbilisi a dozen times. ‘Immediately the town took my fancy,’ he wrote. ‘The houses, crazy structures with jutting verandas, hang like swallows’ nests from the side of a hill. Beneath them a mountain stream tumbles its rushing waters and more houses cluster on the far side.’ I may be wrong — I probably am — but I feel sure Maclean was describing the restaurant where I ate that night.

I stayed at the Tbilisi Marriott, which doesn’t sound all that exciting, but it’s the nicest Marriott I’ve ever slept in, a palatial slice of the Belle Époque on Tbilisi’s most chic street, Rustaveli Avenue, built during the last days of the czars. In a city with such a stormy past, every building tells a story. The Biltmore, just up the road, is even grander than the Marriott. Above its neoclassical portico are Soviet friezes of happy workers, toiling for the other kind of party.

Next morning I went to the National Museum to mug up on Georgia’s complex history. This is where Jason and his Argonauts found the Golden Fleece. I’d always thought that Golden Fleece was merely mythical, but it turns out this was how Georgians panned for gold.

‘Many streams flow from the Caucasian Mountains bearing gold dust so fine as to be invisible,’ wrote Appian of Alexandria in the second century AD. ‘The inhabitants put sheepskins into the stream and thus collect the floating particles.’

Georgia’s modern history is more harrowing, most notably the slaughter of Georgian dissidents by Stalin who, in a supreme irony, was himself Georgian. Between the 1920s and the 1940s, 70,000 Georgians were executed and 200,000 deported. An exhibition called Georgian Artists and the Red Terror juxtaposes paintings by dissident artists with details of their persecution. After these ‘traitors’ were sent to labor camps (where they invariably perished) their children were taken into state custody. ‘Their isolation was inevitable,’ opined the Stalinist diplomat Vyacheslav Molotov. ‘They would have caused havoc by lodging complaints.’

Is this Soviet oppression just the stuff of history books? I wouldn’t be too sure. ‘KGB — still watching you,’ reads the graffiti on the wall. I went into an Orthodox church, crowded with worshippers and icons, and lit a candle for no one in particular. One of the world’s oldest Christian countries, Georgia is famous for its churches. Even in the middle of Tbilisi, with its encroaching Americana, these timeless, ornate places retain their air of mystery.

Will Georgia become the western nation it’s always yearned to be, or will it be swallowed up by Putin? Will Tbilisi preserve that graceful quality, that southern charm, that air of leisure which enchanted Fitzroy Maclean, the Scottish secret agent?

Reading the notes I’d made during my visit, I came across a quote which seemed to sum up Georgia’s position. ‘What do we have to offer the European nations? Our 2,000-year-old national culture, democratic system and natural wealth. Russia has offered us military alliance, which we have rejected. We have taken a different path. They are heading for the East, and we for the West.’

I thought it must be something one of those Georgian ministers had told me, but then I realized it was something I’d read at the museum. It was a quote from Noe Zhordania, head of the Democratic Republic of Georgia. It was something he said in 1921, a few weeks before the Red Army marched into Tbilisi.