Back in the USSR

Foraging for mushrooms and the taste of freedom in eastern Europe, 30 years after the fall of the Berlin Wall 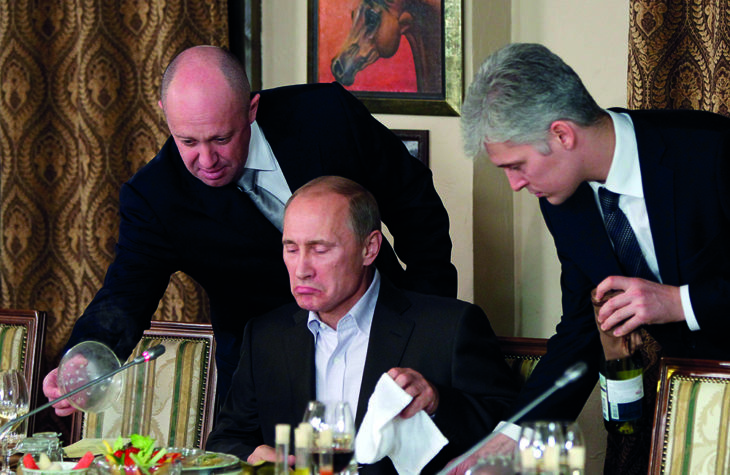 Back in the USSR

A perfect summer day in the wild woods west of Moscow. Around us, slender birch saplings lean together, lean apart, like elegant dancers swaying to the music of the wind. Buckets in hand, Dmitri Denisovich and I walk between shimmering streaks of brightness and patches of shade, collecting mushrooms.

Every Russian knows the names of at least a dozen forest mushrooms. Adults and children alike are said to be able to follow their rich musty fragrances into the darkest glades, recognizing the tastiest, rarest and most poisonous fungi. ‘Lisichki!’ cries Dmitri, spotting a cluster of yellow...

A perfect summer day in the wild woods west of Moscow. Around us, slender birch saplings lean together, lean apart, like elegant dancers swaying to the music of the wind. Buckets in hand, Dmitri Denisovich and I walk between shimmering streaks of brightness and patches of shade, collecting mushrooms.

Every Russian knows the names of at least a dozen forest mushrooms. Adults and children alike are said to be able to follow their rich musty fragrances into the darkest glades, recognizing the tastiest, rarest and most poisonous fungi. ‘Lisichki!’ cries Dmitri, spotting a cluster of yellow ‘little vixen’ chanterelles. ‘My favorite.’

In eastern Europe, all the food is on the table; in the West, it’s all in the cupboard. So say Russians who are used to sharing their plenty, for so often they’ve had nothing at all. Millions starved to death during Stalin’s forced famines. In World War Two the homeless lived off berries, bark and Spam. After the collapse of the Soviet Union, Russia’s gross domestic product fell by half, more than America’s did during the Great Depression. Male life expectancy crashed to 57 years, the lowest in the industrial world. People struggled to survive, bartering vegetables from dacha gardens, trading heirlooms for a string of sausages, asking if there were such a thing as right and wrong as criminals lorded over the streets and the Kremlin. Now, 30 years after the fall of the Berlin Wall, much has changed in Russian diets and much, I learned from the country’s chicken tsar, has stayed the same.

On rising ground amid young pines, Dmitri and I find small, oily maslyata. At the foot of birch trees grow brown-capped podberyozoviki and — in a stand of aspen — its orange-capped cousin podosinoviki. Later, we’ll breakfast on honeyed opyata bubbled in sour cream and brightly capped birch boletes sautéed in garlic and topped with parsley.

‘My childhood was gray: gray clothes, gray school, gray pot of cabbage soup on cooker,’ Dmitri tells me. His words seem to form at the back of his mouth, stumble across his tongue and then tip syllable by syllable over his lips. ‘When glorious Soviet Union went to dog, people suddenly can buy everything they ever dreamed of, like bananas. To get them, they started to hustle, selling salami, vodka and chicken.’

In the early 1990s George H.W. Bush donated tons of frozen chicken quarters to the crumbling empire. To hungry Russians, America’s plump, pink legs and thighs were manna from Heaven (or Arkansas). With their gift for wit and repartee, they dubbed the phosphate-filled imports ‘Bush legs’.

‘Never before had anyone seen such beautiful fat legs, not even on their own babushka,’ says Dmitri, who hijacked some shipments and later cornered the poultry market. Like hundreds of other brazen chancers, Dmitri seized opportunities and, having cut a deal with amenable relatives in the KGB, cashed in on public naivety. Back then, he says, anyone with balls and the right connections could ‘bag couple of oil wells’.

Another go-getting chancer was Vladimir Putin. A revanchist driven by redemptive purpose, Putin was determined to right what he called ‘the greatest geopolitical catastrophe of the 20th century’. As he rose to power, he invented enemies and exaggerated the threats. One of his tools is Patriot Park, a 500-acre military Disneyland outside Moscow. Hundreds of ultramodern tanks and futuristic mine-clearing robots loom over its vast courtyard. In glitzy exhibition halls, swanky publicists from Arsenal Arms and Kalashnikov Industries brag about armed drones and Balkan grenade launchers. Children clamber over Terminator combat vehicles. Grandparents pose at the controls of a nasty Buk missile launcher, similar to the one that brought down Malaysia Airlines MH17 in 2014, killing all 298 passengers and crew.

In addition to ‘family fun’, Patriot Park serves up lashings of crowd-pleasing Russian army rations. At the canteen, a security goon pats me down for a concealed weapon as artillery fire flashes on the horizon. Lunch consists of canned ‘caviar’ conjured from turnips, oily no-name meat pilaf and tinned bread. My indigestion is assured with a round of pishki — spongy ring donuts dusted in powdered sugar — washed down with Soviet-era coffee, which is pre-mixed with milk and sugar.

In the canteen I meet Adina, a fortysomething techie and former employee of ‘Putin’s chef’, Yevgeny Prigozhin, the one-time hot dog stand owner for whom the way to Putin’s heart was not just through the presidential stomach: Prigozhin has been sanctioned by the US government for alleged election meddling. Adina worked for his Internet Research Agency, a particularly mendacious division of Russia’s virtual arsenal that is waging an informational war on the West through a menu of Facebook posts, fake Twitter accounts and deepfake photographs. Over the stodgy pishki — produced, like the rations, by Prigozhin’s catering firm — I ask Adina if she is ashamed of her manipulation of Google’s algorithms and her readiness to subvert truth for a paycheck. ‘We were told to never apologize,’ she replies, licking powdered sugar off her slender fingers. ‘Facts are white noise and emotions rule.’

At the end of the day I step over a border, out of the largest country in the world into one of the smallest. It’s the summer solstice — Jaanipäev — and I spend it with the barbecue king of Estonia. Jaan Habicht founded the Soviet Secret Barbecue Society, though it is neither Soviet nor secretive. He’s a biochemist who uses his scientific training to perfect grilled ribs with apple-cowberry sauce, sear racy ginger-chili salmon and transform meatloaf with blowtorched chocolate. His full-blown eccentricity — cooking in a black jumpsuit, calling himself a Glasnost Cowboy, traveling with a collapsible two-level smoker that brings to mind a drum of enriched plutonium — has made him a celebrity on the so-called ‘barbecue circuit’, the thrill of the grill propelling him from Tallinn’s Golden Grill festival to the Calgary Cowboy Cookout and New York state’s Oinktoberfest.

As the sun dips below the horizon and then rises again, Jaan serves me his signature masterpiece: scorched bullock filet — marbled, velvety and soothing at its core, yet with a crisped charcoaled edge. ‘It’s not all spin, you know,’ he insists with spatula on heart. ‘The secret is knowing how to get to the molecular level to tenderize the meat’s tissues.’

Thirty years ago in Berlin, Prague and Moscow, I’d danced on the grave of communism. Europe had survived the rages of the demigods and their hateful executioners and emerged, scarred but whole, into a better world, or so it had seemed.

Rory MacLean’s Pravda Ha Ha: True Travels to the End of Europe, is published by Bloomsbury. This article is in The Spectator’s January 2020 US edition.