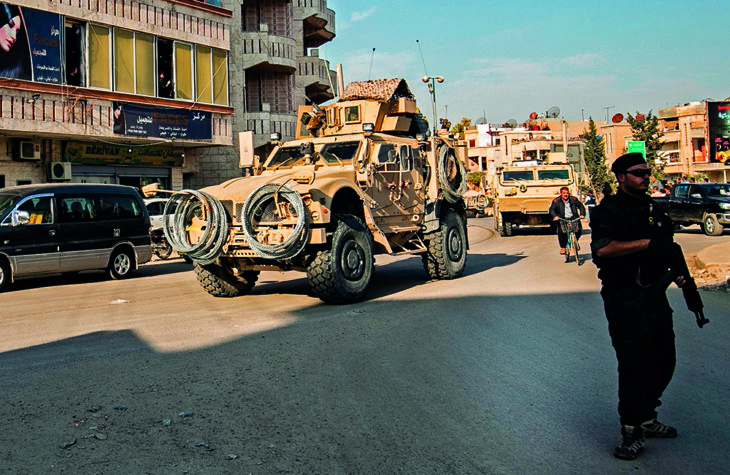 Van guard of the rearguard: an SDF soldier keeps watch as the Americans pull out from Qamishli

This article is in The Spectator’s January 2020 US edition. Subscribe here.Malkef, northern Syria
I’m sitting under an olive tree about a mile from the front with ‘Agir’, a Kurdish soldier from the Syrian Democratic Forces (SDF). The sharp cracks and dull rumbles of fighting make their way to us over dusty farmland; the shade protects us from the scorching mid-morning sun and omnipresent Turkish drones. Agir tells me how the Turkish-backed Free Syrian Army (FSA) can’t fight — at least, compared with the Islamic State (Isis).

I’m sitting under an olive tree about a mile from the front with ‘Agir’, a Kurdish soldier from the Syrian Democratic Forces (SDF). The sharp cracks and dull rumbles of fighting make their way to us over dusty farmland; the shade protects us from the scorching mid-morning sun and omnipresent Turkish drones. Agir tells me how the Turkish-backed Free Syrian Army (FSA) can’t fight — at least, compared with the Islamic State (Isis).

Agir fought Isis with American backing for years in Syria. Sometimes, he says, Isis soldiers would tie foam cushioning to their feet, sneak up to your position in the moonlight and slit your throat. They would blow themselves up rather than surrender, leaving only shoes and fingers in the sand. The FSA roll in fast with armored vehicles, delirious after watching Turkish planes soften up a position, praising Allah the whole way. But knock out a vehicle or two, Agir says, and the FSA retreats. He reckons that if the US hadn’t surrendered control of this sliver of airspace to Turkey’s drones and jets, the SDF would be back on the Turkish border in a week.

When President Trump ordered the withdrawal of American forces from the Syrian-Turkish border late last year, Turkey’s President Recep Tayyip Erdogan seized the opportunity to launch an invasion. Erdogan’s proposed 20-mile deep ‘safe zone’ is meant to be cleared of SDF fighters, but its borders remain unstable. Trump has praised a Russian-brokered ceasefire. ‘There was never a ceasefire,’ Agir says.

In the village of Malkef, tire fires billow noxious air cover against Turkish jets and drones. Most of the Arab locals have fled their modest mud-brick homes and parcels of farmland. They’re squatting just miles east in Christian villages abandoned during Isis’s reign, waiting to see if the war will catch up with them.

Ali al-Arna hasn’t left yet. He stands in his garden with his wife, trying to remain calm in front of their children. ‘Our faces are smiling but our hearts are pounding,’ he says. A few hours after we spoke, a shell landed in a nearby yard. The SDF soldiers stationed next door say five children were wounded.

Turkey’s air dominance has forced the SDF to revert to guerrilla tactics. Young soldiers, male and female, stroll around Malkef without weapons, wearing tight jeans, flowered scarves and T-shirts so as not to be identified from above. They look like city hipsters in an Arab village, blasting Kurdish revolutionary music from civilian cars. Their military vehicles are parked under trees and covered in blankets. AK-47s are stored indoors. Not long ago, they had Nato aircraft on their side. Now, Turkey’s nominally Nato airpower is against them.

Helicopters swoop overhead, but no one is quite sure whose. Our driver, Mahmood, a chain-smoking Kurd from Qamishli, guessed Russia. Since the American withdrawal, Russia has filled the military vacuum. The Russians support the Syrian regime with airstrikes in other parts of the country, but they’re careful not to step on Turkish toes in the north. The Kurds here generally don’t trust the Kremlin. Last year, Russia controlled the airspace above the northwestern region of Afrin when Turkey launched an offensive. My translator, Roken Biro, was in Afrin and fled with her family to Aleppo. She has a fiancé in Beirut and has sworn off all celebrations, including weddings, until her home is liberated. The FSA appropriated everything her family left in Afrin — their home, their car, her violin.

We arrive in Qamishli, the de facto capital of the region, at dusk on my last night in Syria. There is just enough light to visit the cemetery of the anti-Isis martyrs, with its new tombs from the fight against Turkey. The old caretaker informs us that Qamishli was hit by car bombs half an hour ago. We reach the scene as the sun is setting over a wet street, the clean-up crews scraping the ground of glass and metal. No one knows who did it, but Isis claimed a car bomb in Qamishli last month.

‘Welcome to my miserable city,’ says a passing guard on the dark street. I ask if he is from Qamishli. ‘Yes, unfortunately,’ he says, walking away on broken glass.

The smoke-filled reception of al-Salam Hospital is crowded with people looking for loved ones. Upstairs a Syriac Christian man who claims to be 60 but looks ancient is on his back, sobbing dryly at the ceiling as staff treat his shrapnel wounds. Doctors invite us into an operating room as they dig into another man’s leg. They call us back into the room three times, each time producing another piece of metal from his calf.

Next morning, heading to the Iraqi border, we stop for a cold falafel sandwich. A small US military convoy drives slowly past, large American flags waving in the wind. The locals don’t pelt the convoy with rocks like they do the new joint Turkish-Russian patrols. They merely observe. The Americans are now far away from the fighting.