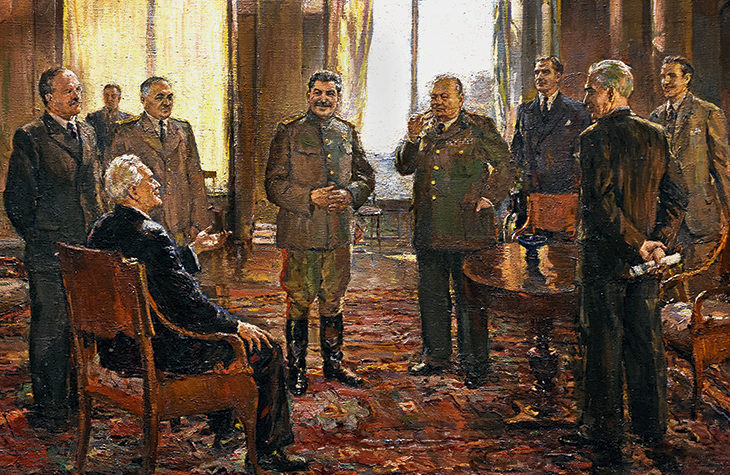 ‘The strong do what they can. The weak suffer what they must.’ Thucydides’ principle expresses an uncomfortable truth. The eight-day meeting between Stalin, Roosevelt and Churchill at Yalta in the Crimea in February 1945 settled the fate of Eastern Europe and beyond. Its effects are still with us. President George W. Bush compared it with the way Britain, France and the Soviet Union sold out to Hitler before the war began: he called it ‘one of the greatest wrongs of history’. ‘Yalta’, like ‘Munich’, has become a synonym for the cynical betrayal of the weak...

‘The strong do what they can. The weak suffer what they must.’ Thucydides’ principle expresses an uncomfortable truth. The eight-day meeting between Stalin, Roosevelt and Churchill at Yalta in the Crimea in February 1945 settled the fate of Eastern Europe and beyond. Its effects are still with us. President George W. Bush compared it with the way Britain, France and the Soviet Union sold out to Hitler before the war began: he called it ‘one of the greatest wrongs of history’. ‘Yalta’, like ‘Munich’, has become a synonym for the cynical betrayal of the weak by the strong. It is an oft-told, well-documented and controversial story. Diana Preston retells it fluently, perceptively and with meticulous scholarship. Her judgments are admirably sensible.

The episode is more complicated than the received view. In February 1945 the world was still viciously at war. Many hundreds of thousands, soldiers and civilians, were still to die. The Red Army already held Poland in a firm grip. It was mopping up in Hungary. In the previous three weeks it had advanced 300 miles to within 50 miles of Berlin. The Russians had already lost some seven million soldiers in dead and wounded. By the time the war ended, they would have lost 27 million soldiers and civilians altogether.

Though their casualties were far fewer, the British and Americans were still fighting desperately against the Germans in the west and against fanatical Japanese resistance in the east. It was not until August 1945 that a kind of peace arrived — at least for the people of Britain and America. On the Continent there were wandering millions, escaping from the advancing armies, liberated from concentration and prisoner-of-war camps or expelled from places where their ancestors had lived for centuries. It would be years before some of them found a home. For a decade, small groups of men on Europe’s eastern margins continued a hopeless fight against the Soviet regime which had been imposed on their countries. The decisions which the three powerful leaders took at Yalta can only be understood if that background is kept constantly in mind.

The central themes of the conference were the future of Germany and Eastern Europe, especially Poland, and Roosevelt’s determination to get Stalin to help the Americans defeat Japan and to cooperate in the creation of the United Nations.

The Poles remain deeply bitter about what they see as western, especially British, betrayal. The story is not a pretty one. In March 1939 Britain and France pledged to go to war if Hitler attacked Poland. It was only a few months after the Poles themselves had helped the Germans carve up Czechoslovakia: nothing is simple. In September we did indeed declare war on Nazi Germany. But we gave no military assistance to the Poles before they were torn apart by the Germans and the Russians: there was little we could usefully have done. Within a year, Poland had disappeared from the map, France had suffered a humiliating defeat and Britain was fighting for its life. Our guarantee had been a meaningless gesture.

Stalin believed that the heavy price in blood that the Red Army had paid for its commanding position in Eastern Europe entitled and enabled him to do pretty much what he liked there. At Yalta he negotiated accordingly. Churchill and Roosevelt fought for a minimum of democracy for Poland and a place in government for the Polish politicians who had been in exile in London during the war. Stalin brushed them both aside, with hollow undertakings that he had no intention of honoring.

Even with the atom bomb in the offing, the Americans feared that the Japanese could not be beaten without horrendous American casualties. At the urging of his military, Roosevelt agreed with Stalin that Russia should recover the territory it had lost to Japan after their war of 1904–5, in return for a Soviet attack on Japan three months after the end of the war in Europe. Stalin kept his promise. In a triumph of logistics, he moved more than 1.5 million men to Manchuria in short order. They attacked, as the bomb fell on Hiroshima. The Japanese surrendered in droves. Stalin secured his lost territories. He had assumed that he could also claim a voice in wider Far Eastern affairs. But now that they had won, the Americans saw no need to make any more concessions to him.

Churchill and Roosevelt were uneasily aware that they had achieved little for Poland at Yalta, but Churchill did not quite give up. In May 1945, with the Germans still fighting, he asked his military for a plan to force the Russians to give Poland a square deal. They said it would take 45 Anglo-American divisions, several divisions of Poles and 100,000 rearmed Germans. Tongue in cheek, they called it ‘Operation Unthinkable’. Churchill folded.

The British continued their fruitless attempts to get a better deal for Poland at the tetchy conferences which they held with the Americans, the Russians and the French until the Cold War began in earnest in 1948. But for fear of Russian reactions they refused to allow Polish veterans to take part in the victory parade in London in 1945, and then to permit the erection of a monument in London to the Polish officers shot by the Russians in Katyn in 1940. The British had gone to war for the Poles, who had made a heroic contribution to victory in their own country, in the Battle of Britain, in the Middle East, in Italy and at Arnhem. Now the British shamefully failed to give them the generous recognition they had earned.

There is a wider lesson. Great powers should not offer or imply guarantees unless they are sure they have both the will and the means to honor them. The supposed beneficiaries should look at the offers they get with beady eyes, lest they find themselves left in the lurch, as the Poles were in 1939. These are basic truths which Ukrainians and Kurds no doubt find themselves pondering today.