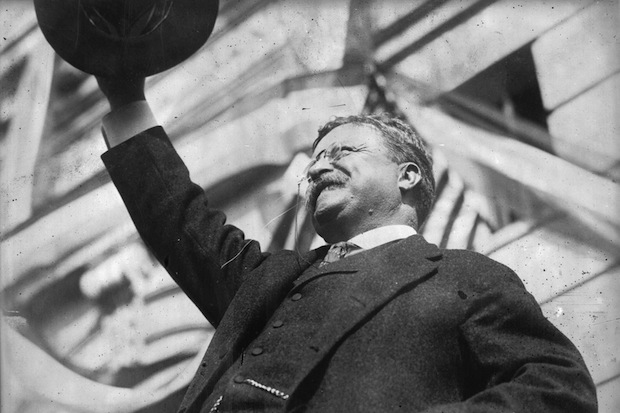 1912: America’s youngest president, Theodore Roosevelt (1858 – 1919), who succeeded William McKinley after his assassination. Roosevelt was a popular leader and the first American to receive the Nobel Peace Prize, which was awarded for his mediation in the Russo-Japanese war. (Photo by Topical Press Agency/Getty Images)

Franklin D. Roosevelt isn’t as popular as he once was. When Barack Obama won the 2008 election, he let it be known that he was reading a book about FDR, and tumbleweed blew through the newsrooms. Which is odd because for many decades FDR was every bit the model liberal as Ronald Reagan was the model conservative. Roosevelt was credited with ending the Great Depression, laying the foundations of a welfare state and leading America through the second world war — achievements for which he was rewarded with not one, not two but four election...

Franklin D. Roosevelt isn’t as popular as he once was. When Barack Obama won the 2008 election, he let it be known that he was reading a book about FDR, and tumbleweed blew through the newsrooms. Which is odd because for many decades FDR was every bit the model liberal as Ronald Reagan was the model conservative. Roosevelt was credited with ending the Great Depression, laying the foundations of a welfare state and leading America through the second world war — achievements for which he was rewarded with not one, not two but four election victories. And he did all of this despite being an elitist East Coaster with a wife who was very probably a lesbian. So cool was the marriage of Franklin and Eleanor, so European, that when Eleanor was asked what she thought of one of her husband’s election victories, she replied: ‘What difference does it make to me?’

Robert Dallek’s superb book explores how they got away with it. Roosevelt was helped somewhat by the era he lived in. Journalists were more willing to pretend he hadn’t been left crippled by a paralytic illness — and the public had no need to know that Eleanor didn’t always spend Christmas with her husband. But the idea that the 1930s was a more genteel age in which it was far easier to govern is bull. Congress was divided not only by party but by region and ideology — and both sides liked to throw around labels like ‘communist’ or ‘fascist’. General Douglas MacArthur applauded a Republican congressman who said that Roosevelt was a proto-monarch, determined to ‘destroy the rights of the common people’. In 1938, a citizen from Atlanta wrote to FDR: ‘Try dipping your head in a pail of water three times and just bring it out twice. Then the country will really recover.’

Roosevelt made mistakes. To overcome constitutional resistance, he tried and failed to pack the Supreme Court. He was too slow to help Germany’s Jews. His neutrality in the Spanish Civil War probably helped Franco’s fascists win. He was obviously too distracted by ill-health to negotiate with Stalin. And he shared the common mistaken belief that the American South could be left alone to evolve towards black civil rights. From the present perspective — when liberalism has become so much about identity politics, particularly race — that looks not only naive but a serious blemish on any record.

Well, perhaps the present asks too much. The scale of conservative opposition to Roosevelt reflected how radical and thus remarkable his New Deal was for its time. He overturned a small government orthodoxy to electrify the countryside, adjust prices, regulate Wall Street, establish social security and support the union movement. How did he do it?

For a start, he was happy to experiment, to try anything that might work, so long as the message was that an activist government was taking the side of the little man. Second, his liberalism was always tempered by conservative instinct. So much energy was spent on helping agriculture, Dallek argues, because Roosevelt had an old-fashioned, bucolic sense of what America was all about. He fretted over balancing the budget — as did the average voter, according to polls — and when it came to welfare, he preferred programmes that put people to work rather than paid them to sit at home. His liberalism was distinguished from socialism in that it sought not to replace capitalism but save it.

It’s customary at this point in any conservative discussion of Roosevelt to say that his economic experiments may have prolonged the Great Depression by meddling with the market — but I’m not going to do that. What right-wingers forget is that the Depression didn’t just test American capitalism but the American way of life itself, and the real secret to Roosevelt’s success was his ability to revive his citizens’ faith in it. Nowadays, liberals seem to dislike America’s small-town, popular capitalism — and the middle-class heartlands for whom it means so much. Roosevelt both consciously and naturally embodied the cultural values of those people, reflected in a ‘personal routine [which] gave assurances that he was grounded in familiar American customs’ — hard work, martinis, poker, stamp collecting and an ability to talk to folks, particularly over the radio, in a way that conveyed authority, humility and complete confidence in the future.

After Roosevelt, only Reagan achieved the same level of public admiration, and he exhibited exactly the same qualities, albeit deployed for a very different political purpose. When Democrats cast around for a candidate to take on Trump in 2020, they should start by dropping the snobbish attitude and picking up a book on FDR.