The Philosophy of Modern Song by Bob Dylan reviewed 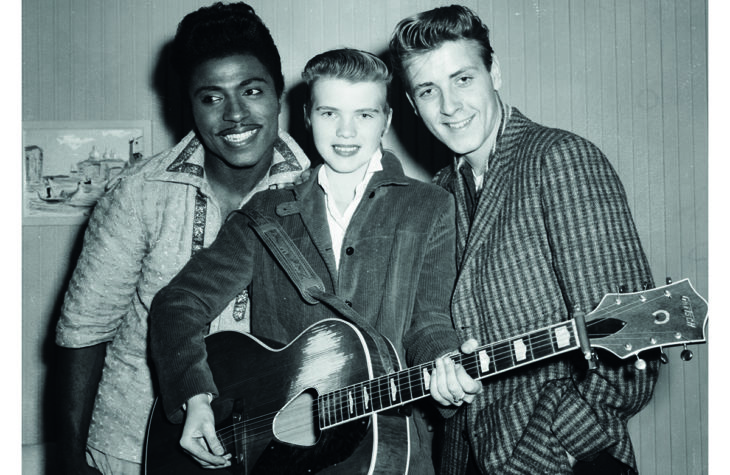 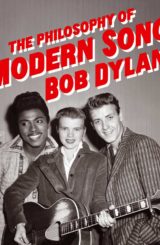 The Philosophy of Modern Song

After you admire the cover of Bob Dylan’s The Philosophy of Modern Song, and its triptych portrait of Little Richard, Alis Lesley and Eddie Cochran in their prime, open it to the title page. There, in pulp-fiction red, is a little crimson lightning bolt. On the next page, there is a photograph of the twenty-two-year-old Elvis Presley — the man who popularized the lightning bolt, with his logo “TCB” or “Taking Care of Business...

After you admire the cover of Bob Dylan’s The Philosophy of Modern Song, and its triptych portrait of Little Richard, Alis Lesley and Eddie Cochran in their prime, open it to the title page. There, in pulp-fiction red, is a little crimson lightning bolt. On the next page, there is a photograph of the twenty-two-year-old Elvis Presley — the man who popularized the lightning bolt, with his logo “TCB” or “Taking Care of Business in a Flash” — in a Memphis record store, looking through just-released bounty like “Here’s Little Richard” and “A Tribute To James Dean.” That lightning bolt is an apt start to a book that repeatedly zaps you with its opinions, memorable one-liners, perfectly selected images, and songs.

“In the Fifties, every red-blooded American boy either wanted to play baseball or be Elvis Presley,” Dylan once said, on his satellite radio show Theme Time Radio Hour. He was a salty, didactic and highly entertaining DJ on the show, which aired from 2006 to 2009 (with a single new episode, “Whiskey,” emerging to brighten lockdown days in 2020). When The Philosophy of Modern Song was announced, longtime Dylan aficionados immediately noted the potential similarity to his Theme Time lessons and carols.

The Philosophy of Modern Song’s strongest debt to Theme Time comes in didactic, discursive chapters so different from those “dream-like riffs” that some are already speculating they were written in part by someone else: as if Dylan can’t write like a boss in multitudinous voices. The riffs are like the prose of Dylan’s epistolary Tarantula, like Beat poetry, like nothing else — freeform musings from the hip that feel unfiltered and spontaneous. The saner, dryer prose around them sets them off more fully. People bothered by Dylan’s sometimes harsh, occasionally coarse language haven’t read Tarantula, or his Planet Waves liner notes, or listened to him when he gets really angry in a song, like his reference to the corrupt politician “pumping out his piss” in “Pay In Blood,” or the jerk in “Black Rider.”

It’s predictable, but it’s wrong, to refer to the songs here as Dylan’s favorites. These are songs he’s using to illustrate points, to instruct and to entertain, not to let us into his heart of hearts and tell us what he likes best to listen to when he’s driving his car or hanging out by his pool.

One surely expects Buddy Holly and his Crickets to leap from the pages in their tall thin Texas suits; where are Mother Maybelle and the Carter Family, Mavis and the Staple Singers, Joni Mitchell, Patti Smith, Joan Baez? It seems wrong not to have either Danny Dill and Marijohn Wilkin’s “Long Black Veil” or “The Weight, ” a song Dylan literally owns, included — but these are his choices and his book; not mine, not yours.

The world has hung on Bob Dylan’s every word since he was dubbed the voice of a generation sixty years ago. He has earned the right to analyze the songs here, word by word. He clearly disapproves of stripping out the lyrics from the music to examine a song’s meaning; his hilarious parsing of the lyrics to “On the Street Where You Live” shows how ridiculous he thinks such treatment is. Many of the songs included here he terms timeless, or transcending time. That is apparently the chief qualification for inclusion, rather than whether they are his favorites. Some of them — Perry Como’s “Without a Song” or Johnny Mercer’s “Come Rain or Come Shine” as sung by Judy Garland — certainly seem to be, he writes of them with such praise and affection. Others — “The Whiffenpoof Song” or “Witchy Woman” — he doesn’t seem to like much at all. What concerns him are what the songs show or mean culturally; where their lyrics and melodies come from; what instruments are used in a recording and to what effect; how songs can be affected by arrangements and individual performers; and, above all, how they make you feel.

Dylan occasionally writes a riff, or portion thereof, from the point of view of the singer, that is to say, the “I” of a particular song. When the singer is a stalker thwarted in love, an angry young man, a vengeful drunk or a heartbroken partner excoriating a cheating one, it makes for some impassioned narrative imagination. Just because Dylan uses his to voice that made-up person doesn’t mean it’s his personal opinion, any more than, say, Robert Browning is a crazy strangler for writing “Porphyria’s Lover” in the first person. Instead, he ventriloquizes the spirit behind the songs. Having been analyzed for decades in terms of his self and personal life in every song sung by “I,” Dylan may be asking us to think twice, alright, before mindlessly and directly equating artists with their art.

If you find what’s written here weird and unsettling, Dylan’s holding the mirror — a word often used in this book— up to nature, just for you. Maybe the riposte is fair play to all who think they know him through his songs or other writings, his art, his films, what other people have said and written about him. There’s plenty in songs to terrify, too, and Dylan doesn’t shy away from modern songs that scare you. Indeed, he seems to like them best.

Are there intimations of the real Bob Dylan, whatever that means, in The Philosophy of Modern Song? He speaks from experience about life in a bus on the road. And we do know that he likes movies. Great stars and films, particularly from the 1950s, drift through The Philosophy of Modern Song; they especially populate the chapter “Saturday Night at the Movies.” One doesn’t particularly expect — but is delighted to see — Olivia de Havilland in her tremendous turn as Catherine Sloper in The Heiress (1949); one does expect, and gets, James Dean, Kirk Douglas, Marlon Brando and High Noon. There are many complaints about traffic in the Los Angeles area, written like a man who’s had homes in the area since at least 1971. And if you needed any reminder that words matter to Dylan, he dedicates this book to Doc Pomus, born Jerome Solon Felder in Brooklyn in 1925, blues singer, writer, and lyricist of, among other classics, “Save The Last Dance For Me,” “A Teenager In Love,” Viva Las Vegas,” and “This Magic Moment.”

My favorite chapters of The Philosophy of Modern Song are just as idiosyncratic as yours will be. We all have our memories and feelings, likes, dislikes and reasons, and Dylan is encouraging us to exercise them. I cried reading the chapter on Stephen Foster’s “Nelly Was a Lady,” sung from the perspective of an enslaved man whose wife has died in her sleep. The spare, simple refrain is unrelenting, heartbroken and heartbreaking:

Nelly was a lady.
Last night she died.
Toll the bell for lovely Nell,
My dark Virginny bride.

Dylan sees individual loss written larger, and for us all, in this chapter: “Let’s strike the bell for stateliness and virtue and let the sirens ring for what’s proper and priceless. Sound the alarm for the salt of the earth and play the anthems for the glory and majesty that has gone the way of all flesh.”

The illustrations deserve both mention and praise. They are copious, and they comment on, enrich and complicate every song. Some are the perfect gimme: Elizabeth Taylor and Richard Burton as Martha and George in Who’s Afraid of Virginia Woolf? (1966) introduce Johnnie Taylor’s “Cheaper to Keep Her.” Others seem miles from either the song or singer, until you do them the courtesy of sitting and reflecting on them awhile. The “aha!” moment is well worth it.

My favorites are the images for Bobby Darin’s “Beyond the Sea.” A woodcut soul sitting on a seemingly detached piling, looking over flat seas to a ship sailing into the distance, precedes the chapter. Turn the page, encouraged to be on the journey, and you see a whale hunt gone grievously wrong, unless you’re a whale. Romping snapping sperm whales, flipping their tails, spouting between the halves of a broken whaleboat and falling doomed men, are downright grinning while they’re wreaking sheer havoc on their would-be hunters. The illustration is by William James Linton, from Thomas Beale’s 1839 The Natural History of the Sperm Whale. Shaken, with Darin’s arching glory of a voice raised in the tale of meeting a lover on a golden shore and never going sailing again ringing in your head (“bye-bye, sailing”), you turn the next page and see Sergeant Warden (Burt Lancaster) and Karen Holmes (Deborah Kerr) in their wave-drenched adulterous beach kiss in From Here to Eternity (1953). It all works grandly.

This rattlebag of songs has something for anyone in it. Above all, don’t just read, sing. To Dylan, singing a song means you claim it, you master it — “it becomes entirely yours.” Dylan seems to believe that this literally keeps us living. “Music transcends time by living within it, just as reincarnation allows us to transcend life by living it again and again.” Keep listening, keep singing, and you’ll keep on keeping on. 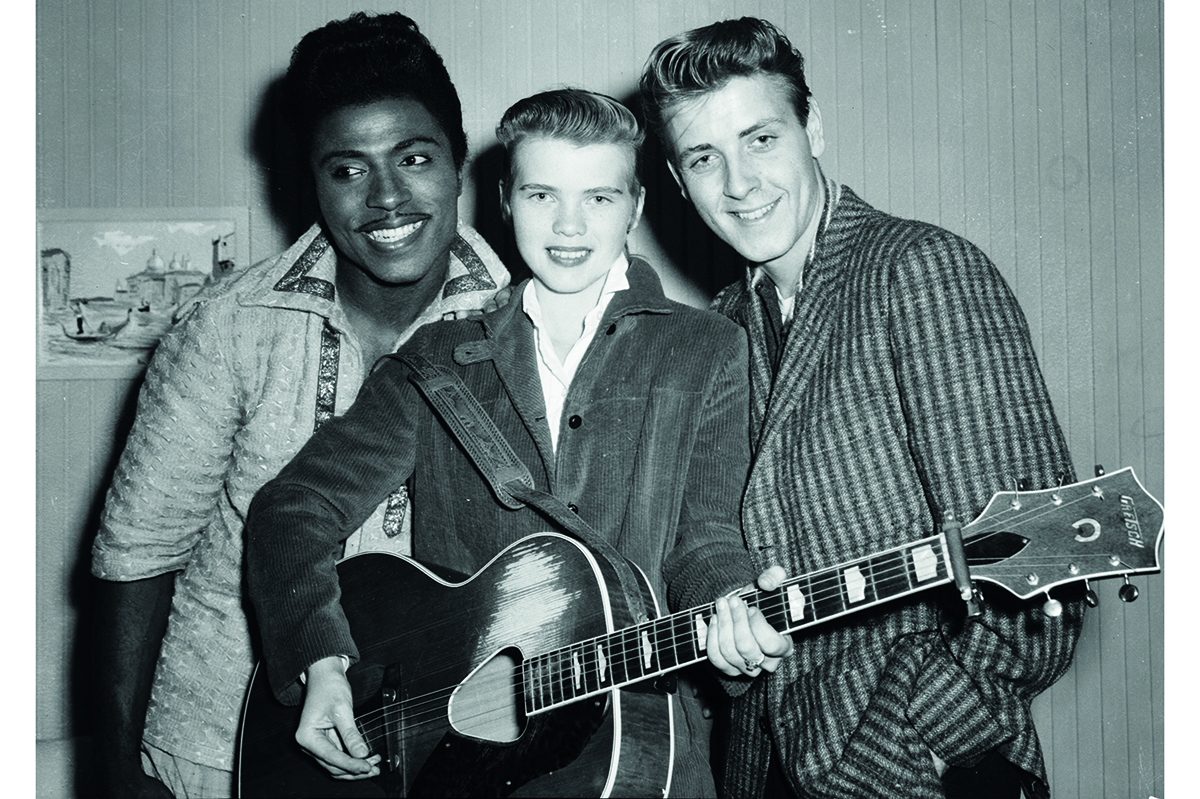