The electrifying genius of Nikola Tesla

Richard Munson’s ‘Tesla: Inventor of the Modern’ emphasises the duality of his subject. 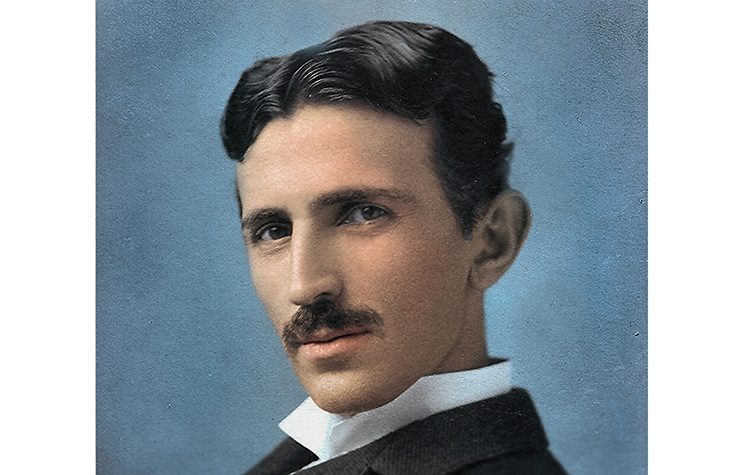 The electrifying genius of Nikola Tesla

Nikola Tesla, the man who made alternating current work, wrote to J. Pierpont Morgan, the industrialist and banker. It was 1902 and Tesla was broke. ‘Am I backed by the greatest financier of all time? And shall I lose great triumphs and an immense fortune because I need a sum of money? Are you going to leave me in a hole?!! Financially, I am in a dreadful fix.’ This was not perhaps the best way of approaching a millionaire who had made his fortune in the very industry Tesla was setting out to transform. It...

Nikola Tesla, the man who made alternating current work, wrote to J. Pierpont Morgan, the industrialist and banker. It was 1902 and Tesla was broke. ‘Am I backed by the greatest financier of all time? And shall I lose great triumphs and an immense fortune because I need a sum of money? Are you going to leave me in a hole?!! Financially, I am in a dreadful fix.’ This was not perhaps the best way of approaching a millionaire who had made his fortune in the very industry Tesla was setting out to transform. It was a time of scientific entrepreneurs and robber barons. Morgan was a man of many concerns. He did not reply.

Begging letters continued to be sent, and duly ignored. Finally, in desperation, Tesla went public, complaining in an engineering magazine about his lack of sponsorship. He concluded that Morgan was pedantic, stupid and ignorant. J. Pierpont Morgan responded at last in a handwritten letter: he said no.

Richard Munson’s Tesla: Inventor of the Modern gives us a detailed and vivid glimpse of the competitive world of electrical innovation at the end of the 19th century, and emphasises the duality of his subject.

Tesla was born in 1856, a Serb inside Croatia who became a naturalised American, therefore a man of no real country, and given life at the crack of midnight, so also of neither the present nor the future. He never really fitted. He was a man of pyrotechnic intelligence, a genius comparable with Einstein, Marconi or Edison (all of whom he berated and belittled), but he also lacked social skills and strategies. He was stumblingly awkward with all women, and most men. He was mad, too, a word which is appropriate for anyone who, for relaxation, shoots 150,000 volts through his own brain. He was planning to boost the power up to a million volts, but died before advances in his technology could get him there. He did not trust medicines — a self-administered electrocution was all the therapy he seemed to need.

Munson tells us that Tesla was eccentric in other ways: he always dressed formally, as if going to the opera, walked with dignity, hands clasped behind his back, then went to feed the pigeons in the park. He loved the pigeons, knew them by the affectionate little names he made up for them, invited them back to his suite of rooms at the Waldorf Astoria, creating a constant noise and pong that drove other wealthy guests to distraction. Distances, house numbers, hotel rooms — he would have nothing to do with them if the number was not divisible by three. He was terrified of germs and would never touch another human: he greeted people with a polite bow, his grey-gloved hands folded behind his back.

Throughout Tesla’s life, his weird behaviour and inventive genius competed not only as career opposites but in the way he treated other people. He made fortunes with his inventions, but lost the money repeatedly by giving away his patents, or forgetting to renew them, or simply by falling out with his patrons. Many benefactors, sensing the ingenuity of his scientific mind, did over time come up with sponsorship, loans or donations. He lived rent-free for years at the Waldorf Astoria. Then his patron John Jacob Astor died in the Titanic — and the new owners of the hotel threw Tesla out, demanding three years’ back rent.

He was unquestionably brilliant. It was the generation and transmission of alternating current electricity that made his name and first fortune, but also his first big falling out, this time with the heroic American figure of Thomas Alva Edison. Edison had pioneered direct current, but DC was not powerful, and either had to be generated locally or required booster stations. DC was private enterprise: a generator sold to every wealthy home or street, whereas Tesla’s AC was democratic, pro bono publico. Edison’s attempt at lighting New York’s skyscrapers meant every few floors had to have a heat-emitting, noisy substation. Tesla generated his more muscular AC from a central power station, so that an entire multi-storey building could be lit from one source. Whole blocks of skyscrapers glowing in the night became possible, a symbol of emerging American technological might.

Soon, alternating current was powering streetcars in Pittsburgh and lighting houses, offices, roads and whole cities. While Edison endlessly tinkered with existing technology, something of a bad loser, Tesla was blessed with a fantastic and inventive imagination. He said his ideas came in visions, sometimes so detailed and ornate that he had no trouble making them practical. Although he patented many new devices (some of them as yet still not built and tested, 75 years after his death), he dreamed of many more.

In his lifetime he directly or indirectly foresaw X-rays, electroconvulsive therapy, transmission of electrical energy through the atmosphere, radio transmitters and wireless telegraphy, splitting the atom, radar and television, laser beams, radio-guided boats and submarines, jet engines, the internet, mobile phones, even the smart watch. But as with da Vinci’s blueprints for a helicopter, Tesla was too far ahead of his time. The social needs did not exist, and the ancillary technology to make the inventions possible had yet to emerge.

Munson ends his most interesting and often amusing book with two tantalising afterthoughts. He describes a delicious conspiracy theory in which a Tesla associate was recruited by Hitler, and returned to the US to kill Tesla. The plot failed, but the would-be assassin changed his name to George H. W. Bush. Just as fascinating is the news that a late supporter of Tesla was a director at MIT, John Trump, uncle of you-know-who. The nephew, campaigning for high office in 2016, boasted of his intellectual qualifications: ‘I had an uncle went to MIT. A genius. It’s in my blood. I’m smart. Great marks. Like really smart.’