Something woke this way comes 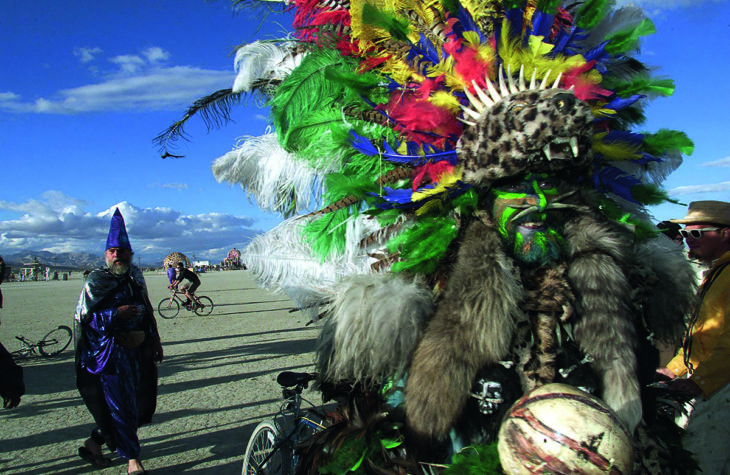 Something woke this way comes

Man’s refusal to accept reality can take entertainingly paradoxical form. One of the more enjoyable is the New Atheists’ crusade (I use the term advisedly) against God — a battle with human nature which, like most battles with human nature, can never be won. God may never have appeared in a burning bush, but, he, she or they came to life in the brains of some ancient hominids, probably as a bug in a new pattern-recognition app. It was a bug with benefits, and as evolution is an opportunist, God has never gone away since.

Man’s refusal to accept reality can take entertainingly paradoxical form. One of the more enjoyable is the New Atheists’ crusade (I use the term advisedly) against God — a battle with human nature which, like most battles with human nature, can never be won. God may never have appeared in a burning bush, but, he, she or they came to life in the brains of some ancient hominids, probably as a bug in a new pattern-recognition app. It was a bug with benefits, and as evolution is an opportunist, God has never gone away since.

Tara Isabella Burton, who has a doctorate in theology, does not deal with the sources of religious belief in Strange Rites, Instead, she focuses ‘primarily on what a religion does’. She defines religion as satisfying ‘four elements of human need… meaning, purpose, community and ritual’, then explores how these needs might be met in our era of ‘spiritual, but not religious’. Her underlying assumption, familiar from sermons down the ages, is that we are all on a ‘quest for knowing, and for meaning: the pilgrimage none of us can get out of’, a long walk that, mercifully, I dodged. And so the jump in the number of Nones, the ‘religiously unaffiliated’, represents a recasting of the American religious landscape, not its decay.

Far from being swept away in a secular age, the old order is dissolving into a new sacred stew, eagerly and not so discriminately sampled by the unaffiliated. They are the fastest-growing religious demographic in America and comprise ‘about a quarter of the population’ — and almost 40 percent of ‘young millennials’. Being unaffiliated is not the same as being unreligious, especially if ‘religion’ is defined loosely. A 2018 Pew survey found that 17 percent of Nones believe ‘precisely’ in the God of the Biblical stories, while another 55 percent may not believe in the old guy with a beard, but in a more nebulous ‘higher power or spiritual force’.

Godless Americans are nearly as elusive as the notoriously no-show deity is. Only around 7 percent of Americans identify outright as ‘atheist’ or even ‘agnostic’. Rather than embrace the reassuring certainty of atheism or the mellow indifference of agnosticism, the Nones, like many Americans past, are headed to the transcendental buffet. They are:

‘the spiritual but not religious, the religious mix and matches, the theologically bi- and tricurious who attend Shabbat services but also do yoga, who cleanse with sage but also sing “Silent Night” at Christmastime.’

Their journeys do not end there. ‘When a man stops believing in God, he doesn’t then believe in nothing, he believes in anything,’ as G.K. Chesterton supposedly wrote. This clever phrase is, if attention is paid to that uppercase ‘G’, subtler than Chesterton may (or may not) have intended. The break does not have to be from the divine, but from conventional faith, whether by abandoning it for the sloppy ecumenicism of ‘Silent Night’, sage-cleansing and Shabbat or by swapping it for novel spiritualities from Wicca to SoulCycle.

Burton sees the Nones as a subset of another largely millennial tribe. She dubs them the Remixed, and devotes most of Strange Rites to them. Shaped by surfing the internet’s intellectual bazaar and consumer society’s emphasis on choice, the Remixed ‘envision themselves as creators of their own bespoke religions, mixing and matching spiritual and aesthetic and experiential and philosophical traditions’. Conditioned by ‘consumer capitalism’, they are prepared to travel — sometimes paying their way — along ‘the spiritual path that feels more authentic, more meaningful, to them’. Burton may not approve of the fact that this might involve money changing hands, but it seems infinitely preferable to wandering around the wilderness, gnawing on locusts.

The Remixed may think that they are breaking new ground but, Burton maintains, they’re after the same old, same old: ‘a sense of meaning in the world and personal purpose within that meaning, a community to share that experience with, and rituals to bring the power of that experience into achievable, everyday life’. She notes that the Remixed tend to have been brought up in environments where religious observance was either weak or by-the-numbers. The big questions went unanswered.

That gap — and others — might have been filled had the Remixed later chosen to immerse themselves more deeply in their parents’ creeds. But that would have meant submitting to demands ‘for adherence, for personal self-denial, for obedience’. Such obligations, Burton asserts, are now ‘culturally stigmatized’ — a claim that would require qualification had she acknowledged the religious elements running through the more apocalyptic and ascetic strands of environmentalism.

Ignoring the Greta in the room helps Burton explain away the Remixed reluctance to turn to traditional faiths. Shifting taboos also play their part. The old definitions of sin have themselves become sinful, to be replaced by new ones. As the rise of ‘social justice’, rightly recognized by Burton as a new religion, tells us, humanity still delights in condemning the wickedness in others.

A tension runs through Strange Rites unresolved. Sometimes, Burton, a theologian who wanted, she confesses, more, and who, judging by her other writings, is a believing Christian, seems to expect seriousness from ‘religion’. But more often than not, she appears to accept that if there is enough meaning to support ritual, community and purpose then, say, even fandom can be enough, though she misses the self-irony that comes with so much of it. When Trekkies, admittedly devotees of a cult born in a less po-faced era, refer to the ‘canon’, they are acknowledging the importance to them of their ‘faith’ and also subverting it. Equally, while a contributor to an ‘anthology on kink’ does indeed celebrate fisting as ‘transcendent’, the ‘kink community’ still may amount to nothing more profound than shared enjoyment of naughty fun.

Where Burton draws the line is unclear. Strange Rites, she writes, ‘is, in large part, about charlatans’ — and so, amusingly, it is. Yet she is exercised about how ‘capitalism and corporations’ peddle meaning, as if countless prophets over the millennia have not, even if their rewards might have come in a less straightforward form than cash. A greater worry would be if corporate leaders actually believed in the ‘spirituality’ they’re selling. The proliferation of ‘mindfulness’ courses being offered throughout companies from the C-suite to the cubicles suggests that they just might: evidence of a spreading credulousness, rather than greed.

There is a grim anthropological fascination in seeing quite where people will turn in their quest for that something, often with a twist that would have been unexpected (or at least unadmitted) a few decades ago. New Age superstitions are now also pervasive among Christians, one marker of a madcap syncretism which Burton now sees as operating at the individual as well as the group level. Can you be both a Presbyterian minister and a Buddhist? Sure. And it does not stop there. For one Dain from Arizona, ‘making art and puppetry are [his] transcendent moments’. Meanwhile 47 percent of Nones believe in the presence of ‘spiritual energy’ in physical objects.

Strange Rites bears witness to almost unlimited gullibility, but it has some remarkable insights — and some remarkable oversights. Most strikingly, there is no discussion of the way that environmentalism is evolving into the most consequential new ‘religion’ of our times, an omission which may reflect Burton’s ideological prejudices. These shine through in asides (‘social justice’ and ‘reactionary atavism’ are ‘battling it out as our new civil religions’) and, notably, in a lengthy paean to ‘social justice’ in which it is frequently difficult to distinguish Burton’s beliefs from those of the social-justice warriors she describes.

Burton is, however, willing to admit to some of her team’s flaws. She doesn’t like the term ‘Great Awokening’, but correctly identifies social justice as a sacralization of politics. So far so uncontroversial, but then she slides in a beautifully aimed knife: ‘“Call-out culture”, at its worst, serves as psychic methadone, providing us with a brief and illusory hit of moral belonging.’ While Strange Rites is not the ‘big’ book that it might have been, it is thought-provoking and frequently fascinating. It is also a cornucopia of out-there esoterica. I, for one, knew nothing about how the experience of military service in World War Two changed gay BDSM culture. Burton’s politics are too deeply felt for her to be an objective guide to those areas where the right curdles into a cult, but Strange Rites elucidates, sometimes accidentally, the left’s flight from reason. The #MagicResistance is a thing: ‘Witchcraft as a politically progressive act has become a whole cottage industry.’