Too much sound and fury in Christopher Nolan’s movies

The Nolan Variations: The Movies, Mysteries and Marvels of Christopher Nolan by Tom Shone reviewed 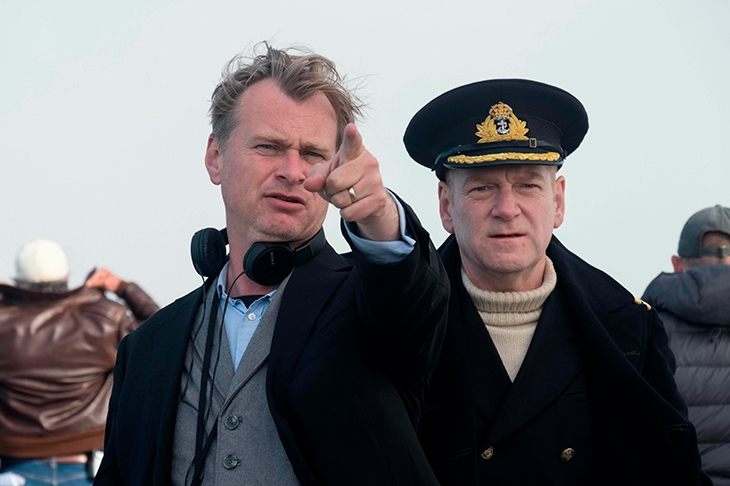 Christopher Nolan and Kenneth Branagh during the filming of Dunkirk (Alamy)

Too much sound and fury in Christopher Nolan’s movies

In 2006 the director Christopher Nolan filmed an adaptation of one of my novels, written a decade and a half earlier. Other than providing the source book, I had no involvement with any part of the filming. Unlike some novelists who have a Hollywood film made, I was not at all disappointed with the result: it struck me as an intelligent, skillful and imaginative adaptation, both similar to but also subtly different from the novel. That it has since become something known as ‘Christopher Nolan’s The Prestige’ seems slightly odd from my point of view,...

In 2006 the director Christopher Nolan filmed an adaptation of one of my novels, written a decade and a half earlier. Other than providing the source book, I had no involvement with any part of the filming. Unlike some novelists who have a Hollywood film made, I was not at all disappointed with the result: it struck me as an intelligent, skillful and imaginative adaptation, both similar to but also subtly different from the novel. That it has since become something known as ‘Christopher Nolan’s The Prestige’ seems slightly odd from my point of view, but that’s the name of the game. Another decade and a half further along, The Prestige still looks pretty good to me. Some people describe it as his masterpiece, which is probably debatable but close to what I think.

One develops a sense of natural involvement with anyone who becomes a collaborator, even if they appear long after the main event, and I’ve followed Nolan’s subsequent career with interest. He has risen in the Hollywood canon, and is now widely recognized as that unusual thing: an auteur director working within the studio system, producing a body of work that has a personal, identifiable stamp while satisfying both worldwide audiences and the suits in Hollywood.

Tom Shone’s portrait of Nolan is a transcription of hours of interviews, clearly sympathetic from the outset, and Nolan dutifully opens up. The book is broadly structured in sequence around the films he has made: he speaks of everything he once intended, then carried out and has now achieved, but the information is shallow. We hear of an interest in Batmobiles and shipping containers and quirks of relativity. Few secrets of cinema are revealed that most filmgoers couldn’t work out for themselves. We learn of a boarding school dorm here, a few short stories there, a lot of James Bond films somewhere else. Shone, a noted critic of film, does not often object, but intermittently he comments obliquely to the reader. In conversation with Nolan he defers, backs down, but at the same time clearly appears to draw from a deeper well of reference than his subject.

The young directors of the 1960s French New Wave wanted to be liberated from the well-wrought screenplays of bourgeois cinema and make imaginative use of what they saw as the real tools of cinema: photography, montage, journalistic style, informal acting. Scripts were secondary. Although they later denied the label, they were the first auteurs.

Nolan’s approach to scripts is similar. Musing about filming Dunkirk, he said: ‘I don’t want a script. I just want to show it, it’s almost like I want to just stage it. And film it.’ Presumably he imagined having 300,000 extras willing to spend 10 days and nights on a beach being strafed and bombed, standing up to their waists in the sea and clambering on to a fleet of rescue boats, while his crew wandered around filming them. Emma Thomas, Nolan’s wife and producer, knocked that idea on the head.

Nolan is highly ambivalent about scripts in any case. He famously claimed to have spent six years working on the screenplay of his most recent film, Tenet. But when you go to see it most of the mumbled dialogue is inaudible beneath a barrage of loud diegetic background noises, loud non-diegetic music and (often) a lot of loud bangs. Audiences and critics have grumbled about this, but Nolan is unapologetic. When Interstellar was released, cinemas in the US put up signs asking the audience not to complain about the eardrum-blistering racket — it was not their fault. Nolan said at the time that it was ‘a carefully considered creative decision’ to use the dialogue as a sound effect, emphasizing ‘how loud the surrounding noise is’.

The dialogue in Tenet is no more accessible to the human ear than before, but this time, forewarned, I bought a copy of the screenplay and read it on the way to see the film. It was therefore less of a mystery. What I discovered was that eardrum-blistered audiences are not missing much. For all his genius as a mounter of cinematic spectacle, Nolan is a dull writer and should leave it to others. His dialogue is expository, with people shouting warnings or muttering minor plot intrigues to each other. A brief sample, from mid-Tenet:

The trouble with leaden dialogue such as this is that it has no room for character development, empathy or complexity. A film without characters is a film of ciphers. Exposition doesn’t even move the plot forward, and postpones until the next scene any hope of storytelling.

Nolan tells what story he has through spectacle and set-piece. In Tenet we are moved from one elaborate and brilliantly photographed mise-en-scène to the next: Vietnam, Mumbai, Tallinn etc. We are rarely told why. Quite often the central character turns up looking well-heeled in a good suit, not a scratch on him, when we recently saw him suffering a painful beating, a coma, a sensationally destructive car crash, a violent shooting. We get no hint of how he traveled from one scene to the next, where he stayed the night or what he had for breakfast. The ‘excitement’ must never lag: there’s a tower block to abseil up, a wind-turbine to climb to the top of, a cyanide pill to swallow, a catamaran to race. Everything is cranked up for effect and appearance. In Inception, Interstellar and Tenet the stories are based around fanciful notions: dreams becoming real, fifth-dimensional beings, time sent spinning backwards. Is this the best use to which a wonderfully talented and imaginative director should put his expertise?

Over the years I have necessarily viewed The Prestige several times on the big screen. Every time, I have overheard members of the audience talking about the film as they leave the theater. They feel challenged, enjoyably mystified; they wonder aloud at what they have seen. They have obviously been made to think. Nolan should take heed. Inadvertently, Shone’s book has a non-Prestige effect. Like one of Nolan’s later films, you leave the book with your head spinning, marveling at the sights you have glimpsed, but you are empty of thoughts or ideas or, in the end, much interest.