The Ryan Gattis guide to Lynwood

A virtual visit in the author’s beloved Los Angeles 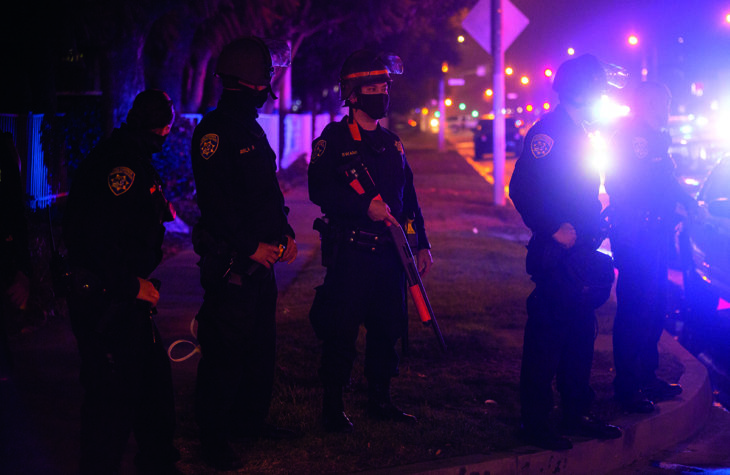 The Ryan Gattis guide to Lynwood

In 2015, after a 10-year hiatus that followed his debut, the novelist Ryan Gattis published a masterpiece. All Involved is a compulsive, symphonic novel set during the Los Angeles riots of 1992, telling the stories of gang members, a firefighter, a nurse and a graffiti artist, among others, as they try to navigate six notorious, brutal days in LA. This month, Gattis returns to this milieu with The System.

Much of the novel is set in troubled, entrepreneurial Lynwood, South Central Los Angeles, where Gattis has spent many hundreds of hours on painstaking research. The story takes place in the early Nineties, but tensions are still high...

In 2015, after a 10-year hiatus that followed his debut, the novelist Ryan Gattis published a masterpiece. All Involved is a compulsive, symphonic novel set during the Los Angeles riots of 1992, telling the stories of gang members, a firefighter, a nurse and a graffiti artist, among others, as they try to navigate six notorious, brutal days in LA. This month, Gattis returns to this milieu with The System.

Much of the novel is set in troubled, entrepreneurial Lynwood, South Central Los Angeles, where Gattis has spent many hundreds of hours on painstaking research. The story takes place in the early Nineties, but tensions are still high in Lynwood: In September, protesters turned up at St Francis Medical Center — an important location in the book — where two sheriff’s deputies were recovering from an unprovoked attack by a gunman. A reporter was arrested in the subsequent melee.

The System was supposed to be the follow up to All Involved, but in 2016 Gattis got side-tracked by an unexpected phone call. Someone had obtained his number. ‘Hey,’ the voice at the other end of the line said. ‘Do you wanna see somebody crack a safe?’

It was a hard offer to refuse. The result was Safe, the visceral if straighter-down-the-line thriller he published in 2017.

The System promises to be Gattis’s magnum opus: a novel dealing with every aspect of the criminal justice system in Los Angeles, and by extension the United States.

‘LA is a trendsetter culturally, but in terms of criminal justice, too,’ he tells me. ‘Most police departments around the country have trained with the LAPD and adopted their tactics.’

Another multi-voice thriller, written in Gattis’s propulsive, first-person present, The System tells the story of an attack on a drug dealer, an addict witness, two accused gang members — and a frame up: only one of them committed the crime.

We’d planned a tour of Lynwood, but COVID-19 made it a virtual tour instead. In person, Gattis is tall, faultlessly polite, heavily tattooed, shaven-headed, energetic. He is 41 and lives in San Pedro in the far south of the city. He has the trademark positivity of an Angeleno, is an enthusiast for Los Angeles — and an evangelist for Lynwood.

He got to know the area during a spell as a member of UGLAR (United Group of LA Residents,) a street art collective:

‘I had this romantic idea of being in an art crew, but they said, “Great, you’re our intern.” So, I was a college professor by day, and by night I carried paints and cleaned, and it was rough and dangerous, working in neighborhoods you don’t want to be in at 2 a.m.’

But he got to know the people. ‘My job, other than carrying and cleaning, was talking to anyone who wanted to talk to the artists. Folks with drug issues, folks with dementia, gang members.’ His upbringing in a military family was useful: ‘I was taught to treat everyone with respect unless they proved they didn’t deserve to be. Doesn’t matter what you look like, what you smell like. I heard more voices in those 10 months than I’ve ever heard in my life, more bits of verbiage and phrasing.’

He established empathy by telling his own story. ‘At age 17, an offensive lineman who was tripping on acid asked me if I wanted to play fight. I said no, he was already swinging, he tore my nose out. I had two facial reconstruction surgeries. It completely changed the course of my life.’ Gattis lost all sense of taste and smell for a year, and found he no longer wanted to pursue a planned military career. The family had moved from Illinois, where Gattis was born on Scott Airbase, to Colorado and a ‘house on a hill that looked down on the Air Force Academy, and my dad told my brother and I, “That’s where you’re going.” It was absolutely my plan.’

The attack changed everything. ‘The way I’d been planning to be a soldier was completely broken, but what really saved me was art — reading, and watching films — and connecting with characters who were broken too.’

The experience resonated with people he met in Lynwood. ‘Usually, when I talk about what happened to me and my nose, people cover their faces, “Oh that must be so horrible.” But that didn’t happen in Lynwood. I realized fairly quickly that I was dealing with an entire community who understood physical pain.’

I ask him to describe how Lynwood fits into Los Angeles more generally. ‘Everybody knows about Compton because of the art from there,’ he tells me. ‘The metaphor I use is that in South Central, south of the 105, Compton is one hemisphere of the heart and Lynwood is the other.’ Demographically, Lynwood is ‘predominantly Latino and predominantly Chicano within that, so folks primarily of Mexican descent, but Compton is rapidly becoming more and more Latino.’

Our tour of the area begins at Plaza Mexico, just off the 105. ‘A big one for me in terms of a spiritual connection. In fact I’m looking at it just now because I commissioned a drawing of it. Beautiful SoCal architecture and plasterwork.’

One of the key meetings of Gattis’s career took place here with an ex-gang boss he refers to as the ‘big guy’. ‘He’s someone who had a lot of power in the late Eighties, early Nineties, and is really the reason I’m sitting here having this conversation.’ Their first meeting began badly. Gattis turned up wearing his paint-splattered street wear, which afforded him a layer of anonymous safety in the area, only to be confronted with the Zagat-rated restaurant La Huasteca. ‘I had to go in and face him looking like crap. When people run for president, they go to La Huasteca — Hillary Clinton has shaken some hands over there.’

Next stop is Tam’s No. 9. ‘It’s in the tradition of the burger places in LA, very Seventies. In the new book, that place is enemy territory.’ We’d have ordered the chili cheese fries, and Gattis ‘might have allowed’ a burrito if I was hungry. ‘Because there’s so much glass you see people drive all the way around the building to park. Imagine it’s 1993 and you see your enemies and they see you, literally see the whites of their eyes.’

A key scene in The System takes place here. ‘A couple of characters go there as a show of power: “Hey we can do whatever we want on your turf.”’ But the sheriffs quickly show the gangsters who’s really in charge. They drive them to our next stop, St Francis Medical Centre, placing them in a dangerous situation in order to extract information. ‘In the late Eighties and early Nineties it was not uncommon for folks who’d been shot to go into the ER, and the gangsters who hadn’t succeeded in killing them to chase them into it.’

Directly across the street is Tom’s Burgers, where the gang members in All Involved go to recuperate from a vicious beating dished out by a special operative known only as Anonymous — one of the best scenes in the book. ‘We’d have maybe got a green chili cheeseburger,’ Gattis tells me. I’m realizing I’d have needed an appetite.

‘After that we’d have gone down MLK towards the Lynwood Union, a non-profit art center which is amazing, and offers all sorts of services for the community.’ The big guy’s help came with unexpected strings attached. ‘He and others asked that I remain as active in the community as possible. I’m there for every Lynwood Union and high school event I possibly can be.’

‘I’d definitely have taken you by Firebaugh High School because it’s directly across the street from the neighborhood that appears in All Involved, including the big shoot out area. They bulldozed the old park nearby because they knew it to be a gang area, and built the school instead.’ All Involved is now taught annually on the school’s advanced placement courses.

Has he always felt safe in the area? ‘No. Not in the early days. I had rules imposed upon me — I was told, “Don’t come at night, don’t talk to this person,” and sometimes I’d just hung out with that person for six hours.’

Gattis credits his success with Lynwood’s residents to listening. ‘It’s my superpower. Just key in and let people feel it.’ The childhood emphasis on respect was ‘quadruply important in a place like Lynwood, because you don’t know who someone is related to, who their best friend is. You have to treat everyone like gold.’

A homecoming launch party had been in the works for The System, at the restaurant Balam. But the book’s promotional events are rapidly being canceled, including a hard-won appearance in the main theater at the Edinburgh Festival alongside David Peace.

‘Ten years ago, Lynwood was a no-go zone: do not go south of the 105 on Long Beach. It’s really exciting to see the growth and development, so that’s another worry I have about the coronavirus; the knock down effect on the community and businesses.’

Prior to the outbreak of COVID-19, controversy had only just been abating around Jeanine Cummins’s American Dirt, a novel by a white woman about an undocumented Mexican immigrant. Does Gattis worry about cultural appropriation?

‘Short answer — no. Here’s the deal, cultural appropriation is taking without permission. I spend time with people who grew up in a criminal subculture and with someone who actively controlled that, and that person literally gave me permission to write what I write.’

Against a backdrop of LA flakiness, the culture Gattis describes in Lynwood sounds refreshing. ‘There is a very real sense of honor. It’s one of the last remaining places in Los Angeles where you’re only as good as your word. If there are negatives, I’ll take them 100 percent of the time from people in Lynwood, because that’s who I’m accountable to. It’s Lynwood first, always.’

Ryan Gattis’s The System is published by MCD ($28). This article was originally published in The Spectator’s December 2020 US edition.