Shakespeare in a Divided America by James Shapiro reviewed 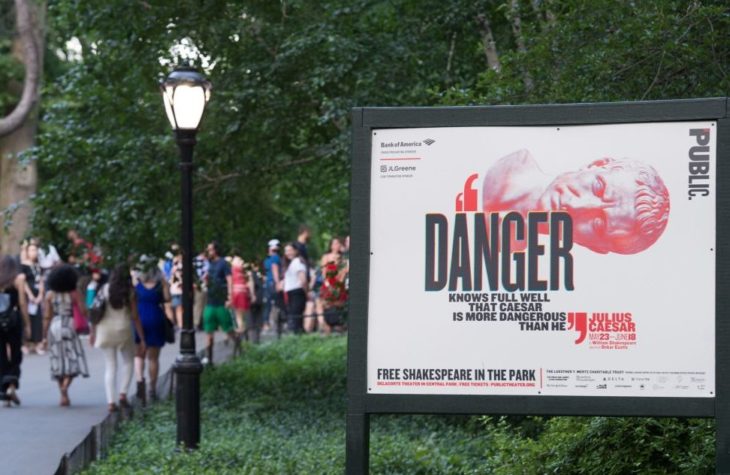 Shakespeare’s single explicit reference to America is found in The Comedy of Errors. The two Dromios are anatomizing the unseen ‘kitchen wench’ Nell, who is ‘spherical, like a globe’: ‘I could find out countries in her’, says one Syracusan brother. ‘Where America?’ asks his twin. The reply, ‘O, sir, upon her nose, all o’erembellished with rubies, carbuncles, sapphires’ embodies early colonial fantasies about the famed riches of El Dorado.

The first record of a Shakespeare text in America comes a century later, and the first known production — an amateur run of Romeo and Juliet in...

Shakespeare’s single explicit reference to America is found in The Comedy of Errors. The two Dromios are anatomizing the unseen ‘kitchen wench’ Nell, who is ‘spherical, like a globe’: ‘I could find out countries in her’, says one Syracusan brother. ‘Where America?’ asks his twin. The reply, ‘O, sir, upon her nose, all o’erembellished with rubies, carbuncles, sapphires’ embodies early colonial fantasies about the famed riches of El Dorado.

The first record of a Shakespeare text in America comes a century later, and the first known production — an amateur run of Romeo and Juliet in the Revenge Meeting House, New York — three decades after that. But by 1898 a book published in Chicago could claim not only that The Tempest, in particular, ‘has an entirely American basis and character’, but further, that ‘America made possible a Shakespeare’.

Institutions, from Hollywood to the Folger Shakespeare Library in Washington DC, strengthened this reciprocal bond. Whenthe showman P.T Barnum sent an agent to Stratford-upon-Avon ‘armed with the cash and full powers to buy Shakespeare’s house, if possible, and to have it carefully taken down, packed in boxes and shipped to New York’, America’s possessive embrace of Shakespeare seemed complete.

James Shapiro’s expert and readable intervention in this long history is organized around defining moments and themes in American life. He shows how, for example, apparently literary arguments over Desdemona’s relationship with Othello mediated toxic disputes about interracial marriage in the early 19th century. He explores how Civil War attitudes to Caesar’s assassination influenced John Wilkes Booth to cast himself as an American Brutus murdering the tyrannical Lincoln at Ford’s Theatre. Kiss Me Kate offers Shapiro a lens to analyze the changing role of women in the workplace and in marriage after World War Two. Harvey Weinstein’s creepy off-screen influence on the plot of Shakespeare in Love places this blockbuster fictional biography of the playwright at the heart of the #MeToo movement.

The book is full of astonishing anecdotes. Who knew that an epicene Ulysses S. Grant, later the 18th president of the US, rehearsed the role of Desdemona for the Army Theater in Corpus Christi, Texas? Or that Fanny Kemble wrote a memoir of her time on a plantation in Georgia? Or that Rep. Henry Cabot Lodge’s claim that American English uniquely preserved the linguistic heritage of Shakespeare leveraged his pursuit of a more restricted immigration policy based on literacy? Or that Monica Lewinsky placed a personal ad in the Washington Post for Valentine’s Day 1998, addressing her White House ‘Handsome’ with lines from Romeo (prompting Shapiro’s inspired reference to ‘Starr-crossed lovers’)? Or that Steve Bannon tried his hand, unsuccessfully, at adapting Shakespeare for the screen, first with a science-fiction version of Titus Andronicus and then a Coriolanus transported to the Los Angeles ganglands during the Rodney King riots of 1992?

But Shakespeare in a Divided America is much more than a series of vignettes. Showing how Shakespeare has been deployed by both sides at defining moments of American history, Shapiro reframes specific, closely researched moments into larger cultural questions about politics and nationhood. His method, honed on the revolutionary micro-biographies 1599: A Year in the Life of Shakespeare and 1606: The Year of Lear, is to combine arresting human storytelling with a deft historical sense.

Shapiro’s description of the Astor Place riot of 1849, in which many people died — directed against the British actor William Macready playing Macbeth — shows his characteristic interweaving of close-up and context. Ostensibly about the theatrical feud between Macready and his American counterpart Edwin Forrest, the disturbance drew its true energies from the dramatic swirl of patriotic, nativist and anti-elitist rhetoric in a New York divided by class, race and politics.

The recently built Astor Place Opera House had been financed by subscriptions from wealthy citizens, and its avowedly elite, hierarchical pricing, lavish décor and dress code specifying ‘black dress coat, white vest, white cravat and white kid gloves’ for men, became a lightning rod for a city experiencing increasing economic inequality. In this charged environment, Macready, touring Shakespeare, came to represent British elitism, while Forrest boosted his patriotic credentials with a nationalistic repertory playing in provocative populist parallel to his rival. Shakespeare’s role in the Astor Place riot, then, was to channel resentments and clarify political binaries. Again and again, Shapiro demonstrates that this particular conductivity has exemplified the life of the works in American history.

The author’s great strength as a critic writing for a wide audience is his easy, rangy mastery of scholarly and archival material. A professor at Columbia University, he has recently begun working as scholar in residence with the Public Theater in New York, and he returns to an electric recent example of Shakespeare in the culture wars for which he held a ringside seat. In 2017, the director Oskar Eustis chose Julius Caesar for the open-air play in Central Park. A tall, blond actor was cast as Caesar and, dressed in a suit and over-long red tie, made his first entrance in full, smiling campaign mode to wild cheers. His supporters wore baseball caps proclaiming ‘Make Rome Great Again’. The media duly bit. Breitbart broke the story: ‘“Trump” Stabbed to Death in Central Park Performance of
“Julius Caesar”’.

It is perhaps surprising that the theater company did not anticipate the violence of the backlash. Corporate sponsorship withdrawn, threats of disruption to the performances, a huge social media campaign that touched many theaters far from New York with populist anger: this was an Astor Place riot for the 21st century. ‘I began to fear’, writes Shapiro, ‘that the Right was now willing to abandon Shakespeare as irredeemably elitist, bringing to an end a vital, two-centuries-long tug of war over his plays in America.’ Eustis’s Julius Caesar was an attempt to use a notoriously even-handed play to generate a dialogue about the threat to democracy. That attempt was, ironically, silenced by those offended by its characterization of the 45th president. Shapiro is committed to a Shakespeare straddling the divide, but makes clear which he believes to be the right side of the argument.

Discussing The Tempest in relation to colonization, Virginia and nation-building, Shapiro obliquely comments on his own method. On sabbatical in England when World War One was declared, the Berkeley professor Charles Mills Gayley researched a book which would champion a liberal Shakespeare, opposed to monarchy and committed to individual freedom and equality before the law, and thus a writer to be counted among the ‘founders of liberty in America’. Scholarly critics at the time, Shapiro observes neutrally, pointed out that there was no textual evidence for any sustained association between Shakespeare and the nascent colonization of the Americas. But, he also notes, they were ‘publishing their critiques in obscure academic journals; Gayley’s book was a popular one.’ The scholars may have been right, in other words, but they weren’t part of a wider conversation.

This implicit opposition between nuanced scholarly evidence and bestselling narrative history has been an enduring one. But, as his latest combination of original research, conceptual clarity and stylistic brio demonstrates, if anyone can put a stake through its elitist heart, it’s James Shapiro.