Fake Heritage: Why We Rebuild Monuments by John Darlington reviewed 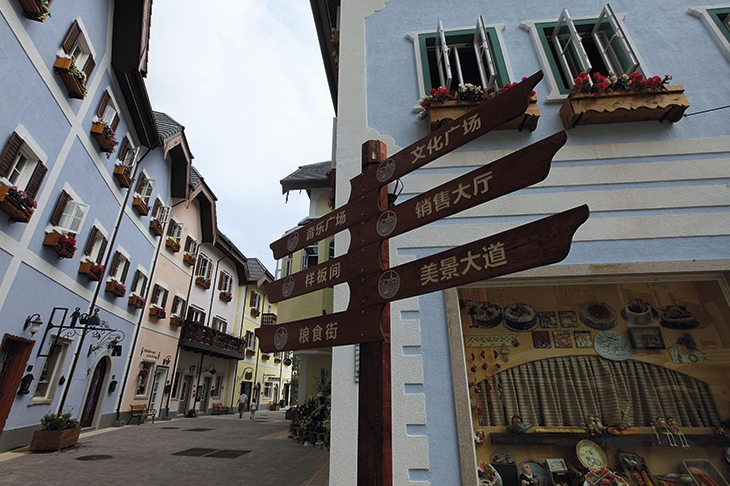 One of several pastiche villages in China: a replica of Hallstatt in Austria opened in Guangdong Province in 2012 (Alamy)

Closely inspect No. 23 Leinster Terrace in Bayswater, London and you might notice the house has no letter box. Push at the door and you might find it stuck; force your way in and you might find you plummet 40 feet through open space down an obsolete ventilation shaft on to the tracks of the District Line. The house is a fake; a five-story façade; an architectural trompe l’oeil disguising a disused steam outlet on the London Underground. (Or, as the realtor might yell down to you, the property combines an airy open-plan design with...

Closely inspect No. 23 Leinster Terrace in Bayswater, London and you might notice the house has no letter box. Push at the door and you might find it stuck; force your way in and you might find you plummet 40 feet through open space down an obsolete ventilation shaft on to the tracks of the District Line. The house is a fake; a five-story façade; an architectural trompe l’oeil disguising a disused steam outlet on the London Underground. (Or, as the realtor might yell down to you, the property combines an airy open-plan design with excellent transport links right on the doorstep.)

Flaws notwithstanding, the white stucco frontage — owned and pristinely maintained by Transport for London— is, like its neighbors, Grade II listed. And the chameleon-like No. 23 certainly fools passersby, who, one assumes, have no idea that the entire exterior could at any moment come crashing, Buster-Keaton-style, down upon them where they stand. The building is a successful item of ‘fake heritage’ — the broad and heterogenous category of objects upon which John Darlington attempts to impose some order in his new book.

Formerly of the National Trust, Darlington now directs the World Monuments Fund Britain, and at times Fake Heritage manifests something of the breathless pace and glossy, impersonal authority of a handsomely illustrated museum guidebook. ‘Welcome to the Paleo-ironic era,’ he writes, beginning the tour.

In this era, the evaluative categories of ‘authentic’ and ‘fake’ are increasingly unstable, our perceptions of the verisimilitude of the built environment found to be in a terminal, very 21st-century state of slippage. In his conclusion, Darlington makes some rather mandatory remarks about the declining respect for expertise and the rise of the internet. Actually the book is much more stimulating than those reflections suggest. It is about the psychology of fabrication. What lies behind man’s near-universal urge to preserve, restore or counterfeit the appearance of history in the physical fabric of his environment? What moves people to fake items of historical interest?

Essential to the notion of the ‘fake’ is the idea of deceit, and, at the limit, fraud. The motivations of fraud — fame, advancement, money — are often transparent enough, though, as Darlington illustrates, there is room even here for more idiosyncratic projects of mass deception. Shinichi Fujimura achieved modest academic fame in the 1970s, first as a compulsive amateur archaeologist, then as a pioneering researcher of the Japanese Stone Age. He became notorious for his heroic feats of solitary excavation, discovering human artifacts at ever lower strata of the earth.

Japanese archaeology came into vogue, with Fujimura as its public face. Investment poured in. Academics accommodated his increasingly ancient estimates of the start of Japan’s human prehistory. The media, fating his downfall, wrote of Fujimura’s ‘divine hands’. ‘No one,’ Darlington reflects, ‘challenged the fact that 90 percent of Japan’s early Paleolithic sites and artifacts had been found by one person’, or that whichever site Fujimura alighted upon would reliably ‘age by 100,000 years’.

By 2000 Fujimura was senior director of the Tohoku Paleolithic Institute and found himself attracting worldwide attention at an excavation in Honshu, where he claimed to have unearthed artifacts at so low a geological stratum as to backdate Japan’s Stone Age by 600,000 years (talk about being ‘in too deep’). Unluckily, he was caught on film by a national newspaper in the early hours salting the site with artifacts, stamping them in place with ‘the sole of his boot’. A subsequent investigation found he had compromised 42 archaeological sites. Fujimura confessed to suffering from a variety of ‘addiction’, a need ‘to make new discoveries’; his colleagues, left to pick up the pieces as it were, rewound Japan’s prehistory forwards by half a million years.

Fake Heritage is full of comparably entertaining case studies — tales of human and architectural folly. It also warns the reader that little of the man-made world is left untouched by the curation, or falsification, of historical appearance. When Saddam Hussein rebuilt Babylon, the bricks were stamped with the message ‘this was built by Saddam Hussein, son of Nebuchadnezzar, to glorify Iraq’. Saddam diverted serving Iraqi soldiers on to his archaeological sites, into which he increased investment by 80 percent. Nationalistic projects of historical renewal, and the related political mythology of inherited legitimacy, authenticated his regime.

English public schools similarly recognize the persuasive eloquence of stone. Pity the post-A-levels adventurer trekking through Asia who, disorientated but finally escaping his cloistered upbringing, comes face to face with the all-too-familiar dusty brick exterior of Chinese Wellington, Chinese Harrow and Chinese Kings College Wimbledon. The ersatz Victorian façades are designer-labelling, a quality guarantee on the product being sold.

On the outskirts of Shanghai it is actually possible to live in a full-scale facsimile English city, Thames Town, featuring Tudor-bethan fish-and-chip shops, red phone boxes and statues of Princess Diana and Harry Potter (you know, like in England). In Hallstatt, Guangdong Province, an imitation Austrian mountain village, the nightmare is completed by the theme to The Sound of Music playing on public speakers.

Chinese town-planners explain — or perhaps confess — that they were ‘inspired’, among other things, by Milton Keynes, reminding us that behind more lurid instances of ‘pastiche heritage’ are trans-cultural problems about how we build and rebuild our world in ways that are sensitive to present needs and to historical irony. The Glasgow School of Art, to give one example, has proved to be a particularly combustible piece of heritage, burning down twice in four years. But perhaps to re-rebuild slavishly from the original Charles Rennie Mackintosh blueprint discards an opportunity, and, more particularly, travesties the legacy of an artist who exhorted his students to ‘shake off…the props that tradition and authority give you — and go alone’.

Sometimes faithfully reconstructing the past might be a way of betraying it. Ruskin, the champion anti-restorer, thought such interventions hopeless. ‘It is impossible,’ he famously declared, ‘as impossible as to raise the dead, to restore anything that has ever been great or beautiful in architecture.’