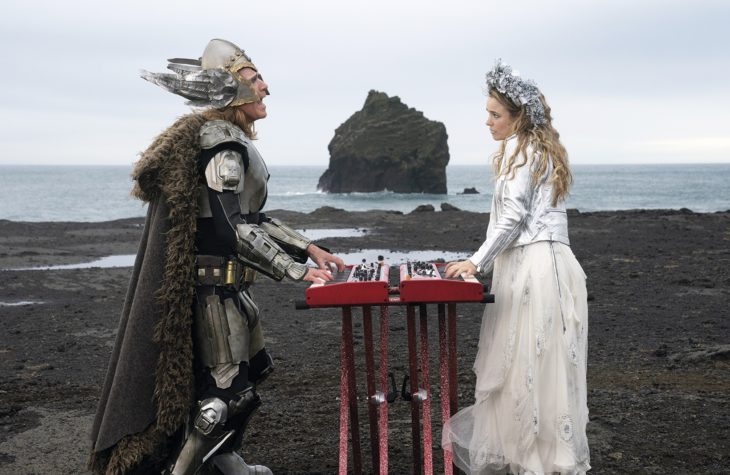 Will Ferrell as Lars Erickssong and Rachel McAdams as Sigrit Ericksdottir in Eurovision Song Contest: The Story of Fire Saga. (Elizabeth Viggiano / Netflix)

This comedy stars Will Ferrell and Rachel McAdams as an Icelandic duo whose biggest dream is to represent their country at Eurovision and win. An open target, you would think. Spoof heaven, you would think. But while this is sporadically funny and features some wonderfully good bad songs with those hooks that you can’t shake off — like kicks to the shin, they linger for ages — it is also over-long, drifts, and is ultimately too familiar, predictable and gooey. It’s not nul points. It’s not the Norway of cinema. Particularly as it also stars...

This comedy stars Will Ferrell and Rachel McAdams as an Icelandic duo whose biggest dream is to represent their country at Eurovision and win. An open target, you would think. Spoof heaven, you would think. But while this is sporadically funny and features some wonderfully good bad songs with those hooks that you can’t shake off — like kicks to the shin, they linger for ages — it is also over-long, drifts, and is ultimately too familiar, predictable and gooey. It’s not nul points. It’s not the Norway of cinema. Particularly as it also stars Pierce Brosnan attired in Icelandic knits and Dan Stevens as the super-camp, super-vain, leather-trousered Russian entry. But it lacks the necessary focus or smarts to keep the laughs coming and sustain its running time. It’s no Spinal Tap, in other words.

The film is directed by David Dobkin (Wedding Crashers) rather than Christopher Guest, alas, and was co-written by Ferrell who had, apparently, been incubating the idea ever since 1999 when he visited his wife’s Swedish family and they turned the contest on and he found it ‘intoxicating’. Each to their own, I suppose. It opens in 1974, in a small town in Iceland, with a little boy watching Abba win the competition and vowing to win it himself one day while his father (Brosnan, in that Icelandic knit, and also speaking like the Swedish chef from The Muppets, which is surprisingly satisfying) looks on disapprovingly.

Spool forward to the present day and the boy, Lars, is now Will Ferrell reprising his man-child shtick from Elf, but that’s OK. as we loved Elf, and we loved Ferrell as Ron Burgundy in Anchorman. (Step Brothers is the one we vowed never to speak of again and if we never again speak of Wedding Crashers, I can live with that.) Lars is still obsessed with winning the contest, as is his childhood friend, Sigrit (McAdams). Together they are Fire Saga, and she is in love with him but he has no idea and blah de blah de blah. It’s the blah-de-blahs that let this film down.

The pair do become Iceland’s official entry — more by luck than design — and the film is at its funniest when it stays true to the excesses and peculiarities and sheer crazy kitschiness of the real thing. Fire Saga’s VT, for example, shows them performing one of their songs, ‘Volcano Man’, while playing on keyboards on a cliff edge as their hair blows in the wind and sea crashes against rock and the next thing you know it’s a waterfall. (‘Volcano Man’ is not their official entry, that’s ‘Double Trouble’ which, decides Lars, is ‘more super-tremendous’.) Stevens, as his character Alexander Lemtov, performs ‘Lion of Love’ — ‘thousands tried to tame me/ but I roam free/ until I saw you/ and you saw me’ — amid fire flares and writhing boys. That’s all lovely, as is a party scene midway through where real-life Eurovision entrants — Netta, Conchita Wurst, etc — gather to belt out a medley of past Eurovision tunes. This is like being kicked in the shin, over and over, but strangely joyful. At these moments it’s blissfully on target as well as fondly on target. The film is never cruel. Plus there are some decent lines. For instance, Lars compares his penis to a Volvo as it’s ‘solid, sturdy, dependable and not going to turn any heads’. I laughed because it’s the truth. I drive a Volvo and if it were a penis I could see it would be just like that as well as a bit dented and scruffy. (I also laughed when Lars and Sigrit declare they are fans of ‘Semen and Garfunkel’.)

But the plotting is all pretty standard stuff. Will Lars’s father become proud of Lars? Will Lars realize he loves Sigrit? Will Lars give up on his dream? (Blah-de-blah.) There’s also a moment when it looks as if we’re heading into The Producers territory but that fizzles out. And along the way there are misunderstandings and declarations of love and one of those races against the clock — will Lars make it to the final in time? Will he? — and elves and ghosts (wholly unnecessarily, in both instances) and an overload of slapstick. Dobkin has way too much on his mind and he opts for the most obvious take every time. There are some further cameos — Graham Norton as himself; Jamie Demetriou as a media spiv — but you’ll have had it by 90 minutes when there is still another half hour to go.

This needed one of those old-style, short-tempered, cigar-chomping producers to have shouted: ‘Cut it, cut it and cut it now!’ Not nul points. Not Norway. But not, sadly, Spinal Tap either. (And not near.)