Kingdoms of the wicked

How to Be a Dictator: The Cult of Personality in the Twentieth Century by Frank Dikötter reviewed 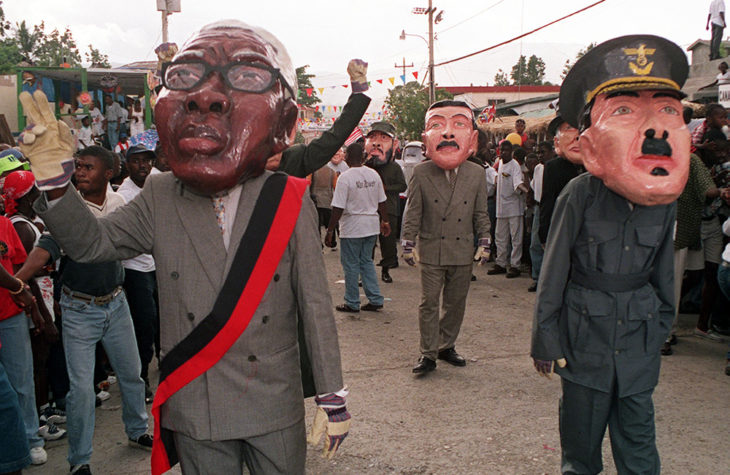 Meet the family: ‘Papa Doc’, Hitler, Maduro and Castro at a carnival in Haiti, 2000

Kingdoms of the wicked

Frank Dikötter has written a lively and concise analysis of the techniques and personalities of eight 20th-century dictators: Mussolini, Hitler, Stalin, Mao Zedong, Kim Il-sung (North Korea), François ‘Papa Doc’ Duvalier (Haiti), Nicolae Ceausescu (Romania) and Mengistu Haile Mariam (Ethiopia). As a comparative study of those individuals, it is enlightening and a good read. The title and parts of the foreword indicate that it aspires also to be a guidebook of dictator tactics. There are some weaknesses in this broader ambition. These eight men were not...

Frank Dikötter has written a lively and concise analysis of the techniques and personalities of eight 20th-century dictators: Mussolini, Hitler, Stalin, Mao Zedong, Kim Il-sung (North Korea), François ‘Papa Doc’ Duvalier (Haiti), Nicolae Ceausescu (Romania) and Mengistu Haile Mariam (Ethiopia). As a comparative study of those individuals, it is enlightening and a good read. The title and parts of the foreword indicate that it aspires also to be a guidebook of dictator tactics. There are some weaknesses in this broader ambition. These eight men were not altogether uniform in their methods of obtaining, retaining or losing power, and certainly not in their abilities. Stalin, Mao, Kim and Duvalier died in office to great public lamentations. Kim’s grandson holds his position; an ostensible heir is in Mao’s old chair. Vladimir Putin, though not nominally a communist or remotely as powerful or brutal as Stalin, invokes aspects of his memory, especially in opposing Russia’s would-be westernizers and in purporting to rebuild Russia’s world influence. Duvalier’s son and heir Jean-Claude ‘Baby Doc’ Duvalier was sent packing (with full pockets), but only after plundering his poor country for a further 15 years.

Of the four who did not die in office, only Mengistu fled into exile. Hitler, still supported, as far as can be judged, by German opinion even in defeat, at least had the dignity to commit suicide. Both Mussolini and Ceausescu were deposed and executed. Dikötter makes the point that all these men tried to claim some theoretical political rigor, though only communism has attracted serious and durable advocates. The National Socialist German Workers’ party was what its name implies, with the hideous further contortion of genocidal racism. As the British Nuremberg prosecutor Hartley Shawcross said of the Nazi ‘thinker’ Alfred Rosenberg: ‘By his interminable hate-filled tracts, he added boredom to the long list of Nazi atrocities.’

According to Dikötter, Mussolini’s ideology was whatever he came up with at the time. The claims of Kim, Ceausescu, Duvalier and Mengistu to being resurrected embodiments of national mystic traditions had no takers; all sustained themselves by brute force supplemented by intense propaganda. Only Hitler, Mussolini, Stalin and Mao were objectively successful for a significant time, and only Hitler bettered the lot of his countrymen before he plunged them into an ultimately unwinnable war.

Fairness to dictators is not a cause that fills me with much enthusiasm, but Dikötter could have mentioned the Concordat with the Holy See in his account of Mussolini, and Germany’s economic progress under Hitler, even if it was the result of mobilizing the entire population to the armed forces and defense production. And what of other dictators who were not as gratuitously barbarous and megalomaniacal and who presided over some objective improvement in their countries? Kemal Ataturk (Turkey), Josip Broz Tito (Yugoslavia), Francisco Franco (Spain) and even Mohammad Reza Pahlavi, the last Shah of Persia, come to mind.

The best parts of this book are vignettes that will enlighten even those familiar with the lives of these men. I had not realized that only 75 people gathered spontaneously in front of Hitler’s chancellery to celebrate his birthday in 1940 or that in his last year, people did not rise and stop talking when he entered a room, as they had for the previous decade. Nor did I know that on Stalin’s 70th birthday he received the signed greetings of nine million Czechoslovaks and 16,767,680 North Koreans (almost twice that country’s population). I was not aware that in Mao’s Rectification campaign of 1942, Zhou Enlai, later the suave premier for 26 years, was forced to denounce himself publicly as ‘a political swindler’ (which was probably true, but nothing compared to his grumpy chief). How else than by reading this book would someone know that Kim, at his first public speech as the supposed Soviet puppet-leader in North Korea, looked like ‘a delivery-boy from a Chinese eatery’? And I’m glad Dikötter exposes the New York Times’s Harrison Salisbury as almost as much a lackey of Kim as he had been of Soviet leaders: ‘a monumentally astute and visionary statesman’, Salisbury called the dictator.

François Duvalier had a public catechism made up to explain his status as a national savior and won a referendum on being president for life by 2,391,116 to one. Nicolae Ceausescu was officially described as combining the traits of ‘Julius Caesar, Alexander the Great, Pericles, Cromwell, Napoleon, Peter the Great and Lincoln’, while ‘Papa Doc’ Duvalier was a literary giant in the same class as ‘Kipling, Valéry, Plato, St Augustine and de Gaulle’. Ceausescu received the Order of the Bath and the Légion d’honneur in his brief period of popularity after declining to join in the 1968 invasion of Czechoslovakia. He and his wife, Elena, performed doughtily at their execution — he sang the ‘Internationale’ while she shouted obscenities.