The Year 1000: When Explorers Connected the World — And Globalization Began by Valerie Hansen reviewed 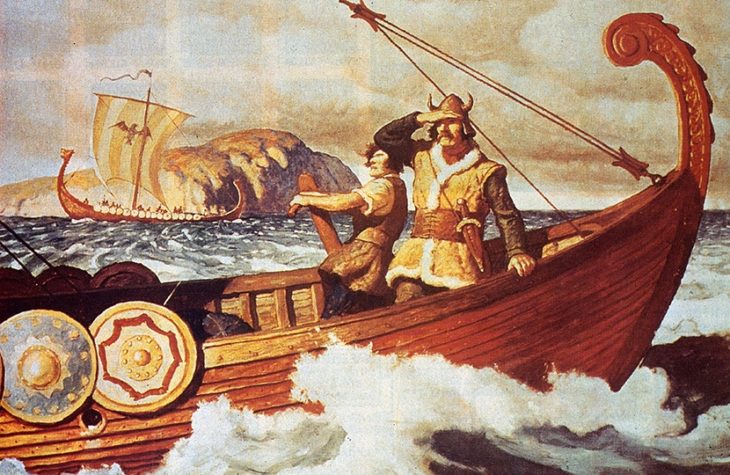 In Japan, people thought the world would end in 1052. In the decades leading up to judgment day, Kyoto was rocked by a series of epidemics. It seemed the end was truly nigh. Of course they were wrong, but they were hardly the only people to predict the end of humanity on a specific date. For many tenth-century Christians, the year of the expected doom was 1000 AD.Valerie Hansen’s book focuses on this non-apocalyptic but significant year as the beginning of what we would think of as globalization. Obviously with our European perspective we’re familiar...

In Japan, people thought the world would end in 1052. In the decades leading up to judgment day, Kyoto was rocked by a series of epidemics. It seemed the end was truly nigh. Of course they were wrong, but they were hardly the only people to predict the end of humanity on a specific date. For many tenth-century Christians, the year of the expected doom was 1000 AD.

Valerie Hansen’s book focuses on this non-apocalyptic but significant year as the beginning of what we would think of as globalization. Obviously with our European perspective we’re familiar with such major events of the 11th century as the Norman Conquest and the First Crusade. But this book draws us to what was going on in the Americas and Asia as well.

Hansen brings us back to her theme from different angles: looking at the voyages of the Vikings, trade routes across south east Asia, the journeys of the Polynesians in the Pacific (and the end-of-times fears of the Japanese). This means that, unlike John Wills’s 1688, she doesn’t focus exclusively on the events of a single year. Rather, 1000 is a fulcrum around which her text moves, as she reaches into the centuries before and after, depicting how the world was changing at that time.

Her claim is that our interconnected world dates back much further than we think. She suggests that it was in 1000 that Norse explorers ‘closed the global loop’ with their voyages to North America. This is perhaps a bit of a stretch: there was no continuing chain of communication along this route. Nonetheless, knowledge of how far the Norse went (and the archaeological proof that has emerged since the 1960s) reminds us of how much world exploration took place before Columbus and Henry the Navigator. Hansen argues quite persuasively about the role of the Norse in creating new ways of trade and exploring different parts of the world. There is even a suggestion that some Vikings may have made it, either by accident or under force, to Mayan territories on the Yucatan peninsula. The archaeological indication is in the form of artworks depicting blond captives. This is suggestive rather than definitive, but it is intriguing.

Meanwhile, one of the biggest international exchanges going on in 1000 was the slave trade, bringing people from sub-Saharan Africa to North Africa and the Middle East. Arabic texts report the geographic origins of the enslaved and how they were traded by sea and by land to fulfill an apparently unending demand. Enslaved people were a commodity: regions with no natural resources simply exported people instead. And it was along those slave routes that other goods would come too.

Religion was also an export — and a key factor in trade. Leaders liked to ally with co-religionists. According to Hansen, 1000 was a point of realignment on this front, as regional rulers decided to choose a religion for their followers based on realpolitik. New groups adopted Christianity and Islam, but also sometimes Judaism. Trade routes and alliances were formed (or not) based on the religion of those in control — and the choice made by rulers back then would cast a long shadow on modern political alignments. A key point is that most of the encounters of this period (unlike those of 1492 and later) were between technological equals. Although groups in different parts of the world had developed distinctive technologies, there was not yet such a great imbalance in possibilities as there would be in centuries to come.

Hansen is herself an expert on Chinese history, so it is no surprise that her final chapter depicts China as the most globalized part of the world. Through its early participation in trade along the Silk Road and connections to south east Asia, China does offer examples of what we think of as modern economic systems — in terms of specialization of production and regional trade. Hansen suggests that the reason China didn’t industrialize, despite its sophistication, was simply a labor issue. The Chinese never needed to mechanize because they never lacked manpower.

Much of what is described here has only been fully understood in recent decades, as science has advanced to aid archaeology. Satellite mapping of terrain and DNA testing of remains have allowed narratives to be linked in ways scholars could only surmise in the past. I was fascinated to learn that the Norse made it to Madeira before the Portuguese — and that this was proved by the DNA of mice that came along for the trip. The Year 1000 is a tour-de-force and offers many new ways of thinking about the past.