Friedrich Hayek: a great political thinker rather than a great economist

Hayek: A Life, 1899-1950 by Bruce Caldwell and Hansjoerg Klausinger reviewed 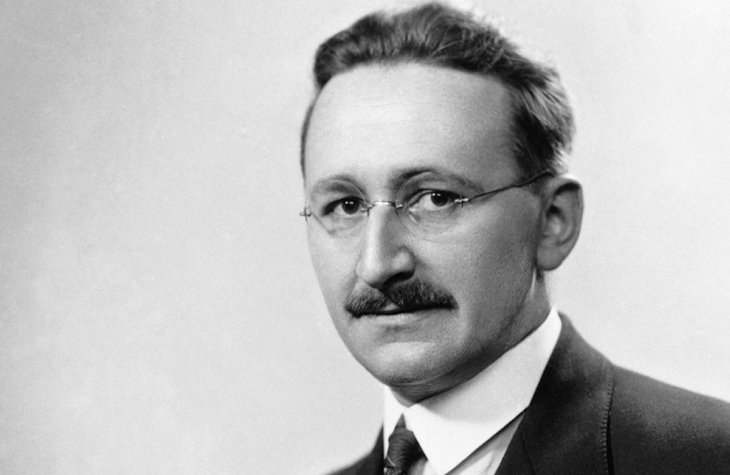 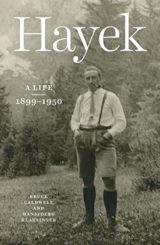 Despite being awarded a Nobel in economics in 1974, Friedrich Hayek was a great thinker rather than a great economist. He called himself a "muddler." His own attempt to build an economic theory floundered. His major contribution was to emphasize the limitations  of economic knowledge, and thus the inevitable frustration of efforts to build economic utopias. His theorizing was abstract, but his purpose was practical: to make the case for a liberal economic order which would be proof against the political and economic wickedness and madness through which he lived: the two world wars, the...

Despite being awarded a Nobel in economics in 1974, Friedrich Hayek was a great thinker rather than a great economist. He called himself a “muddler.” His own attempt to build an economic theory floundered. His major contribution was to emphasize the limitations  of economic knowledge, and thus the inevitable frustration of efforts to build economic utopias. His theorizing was abstract, but his purpose was practical: to make the case for a liberal economic order which would be proof against the political and economic wickedness and madness through which he lived: the two world wars, the Great Depression and the rise and fall of fascism and communism.

Hayek’s was a slow-burning flame. He hit the intellectual jackpot with his 1944 book The Road to Serfdom, a dire warning that western democracies were on a slippery slope to despotism, a book which influenced Margaret Thatcher. He was also an adroit academic politician and fundraiser, and left an enduring institutional legacy in the Mont Pelerin Society, a sanctuary for free-market thinkers.

This is not the first biography of Hayek. Alan Ebenstein and Bruce Caldwell himself have written intellectual ones. But Caldwell and his German-speaking co-author Hansjoerg Klausinger wanted to write the last one, at least “for this generation.” The result of ten years’ toil is a first volume of 800 pages, which takes Hayek’s life up to the age of fifty, with a second one — presumably of similar weight — to cover his remaining forty-four years. No one is likely to repeat this feat: all the materials are assembled under one roof. It is only interpretations which will shift. This is the definitive Hayek for our times.

Inevitably, it raises a question about the purpose of biography. In reviewing the first volume of my own life of Keynes, the economist Maurice Peston wrote: “What help is knowledge of the lives of Newton and Einstein in predicting the movement of the planets?” To which the answer is that economics is not a natural science like physics. One needs to know the economist, and his location in the flow of events, not to test his theories but to judge their value for our own time.

The context of Hayek’s thinking here revealed is usually illuminating, but occasionally details of the “times” overwhelm the “life.” One rather despairs when one reads sentences such as: “Fritz entered the university to study law, but to trace his subsequent path we must first delve into the complexities of the law curriculum at the University of Vienna.” With an effort (and some prior knowledge) the reader can trace a clear personal and intellectual thread from birth onwards, but one could have wished for a more skillful integration of background and foreground.

Friedrich von Hayek was born in Vienna in 1899 into a conservative, Christian, German, professional, mildly antisemitic family of lower nobility (hence the “von,” rather like the British “Sir”). Pre-war Vienna was both the cultural capital of Europe — mainly because of its brilliant, recently emancipated Jewish intelligentsia — and the home of destructive racial, religious and social conflicts. This background offers a key to understanding Hayek’s intellectual journey, which was a lifelong quest for a theory of economic order invulnerable to the destructive tendencies of democratic politics. This gave “Austrian economics” its rigid, Platonic character, at odds with the “pragmatic” approach of the politically more secure Anglo-Americans.

However, the theoretical case for entrusting to the free market exclusive direction of the flow of society’s goods and services depended heavily on demonstrating its god-like capacity for rapid adjustment to changing conditions, and it is here that the Austrian School fell short. Hayek inherited from Eugen Böhm-Bawerk a theory of “inter-temporal equilibrium.” Adjustment between the consumer and capital goods sectors is secured by movements in real interest rates, reflecting changing consumers’ “time-preferences.” But Hayek also inherited from Ludwig von Mises a theory of money and credit, in which money was the “loose joint” in this system of automatic adjustment. This is because banks could finance investment from credit rather than from the voluntary saving of the public. This produced the “wrong” discount rate between present and future goods. Hence the importance of keeping the devil of money creation under the strict control of the gold standard.

In Hayek’s view, slumps were caused by excessive credit creation, leading to a distorted structure of production, which was bound to collapse when the economy ran out of the savings to complete the investments. To inject more credit into a diseased system would only make the disease worse. The malinvestments had to be liquidated for healthy growth to resume. Slumps had to be allowed to run their course.

This left the Austrians without a sensible policy in the face of the Great Depression of 1929-32. They were like Protestants preaching rigid virtue in a situation which called for a large dose of Catholic forgiveness. Lionel Robbins had brought Hayek from Vienna to the LSE in 1931, to counter the dominance of the “Cambridge school” of economists. The battle between Hayek and Keynes over the causes of, and cures for, the Great Depression is well told, but is also well known. Both were political liberals, but whereas Keynes believed that the preservation of political liberty required substantial modification of economic liberty, Hayek thought that the two had to be tightly tethered together to prevent the slide into totalitarianism.

Hayek’s first sortie to Cambridge to explain the slump left his audience baffled. Eventually, Keynes’s assistant Richard Kahn asked: “Is it your view that if I went out tomorrow and bought a new overcoat that would increase unemployment?” “Yes,” Hayek replied, pointing to a blackboard full of triangles, “but it would take a very long mathematical argument to explain why.” Mystification was increased by the fact that students could never tell whether Hayek was speaking English with a strong German accent or German with an English accent.

Over the 1930s most of Hayek’s students at the LSE, notably Nicky Kaldor, defected to the Keynesian camp. The reason is obvious: in the face of the greatest economic catastrophe of modern times, he had no policy to offer except general belt-tightening. The softly spoken, reasonable sounding professor from Vienna with the ambiguous smile turned out to be a sadistic deflationist. Even his patron Lionel Robbins deserted him, writing in his memoirs that Hayek’s attitude “was as unsuitable as denying blankets and stimulus to a drunk who had fallen into any icy pond, on the ground that his original trouble was overheating.” Yet Hayek never changed his tune. In the early 1980s he told Thatcher that the only way to kill inflation was to have 20 percent unemployment for six months.

He more or less gave up technical economics after his battles with Keynes and the Keynesians, and switched to the intellectual course which would eventually bring about his apotheosis. His target this time was the planning movement, then very much in vogue among left-leaning intellectuals. “Socialist planning,” boosted by its “success” in the Soviet Union, was their answer to capitalism’s distempers. Against this, Hayek claimed that “economic calculation” required prices; prices reflected individual choices; those choices could not be known in advance by the planners; they were “discovered” by market transactions, which co-ordinated them.

Hayek’s shift was a retreat from economics to political economy. Rather than trying to “prove” the theoretical perfection of the market system, he started to argue that, imperfect though the market system was, in the long run central planning systems were bound to be worse: worse for efficiency and much worse for liberty. It was the “fatal conceit” of the planner to believe he could somehow hoover up all the dispersed knowledge (including the subjective preferences) of millions of people into a central planning ministry and apply it to solve economic problems. Rather, it was the price system itself which “discovered” this knowledge and coordinated individual plans. He called his own “discovery” that social knowledge is subjective and dispersed the “most exciting moment” of his life. Caldwell agrees: Hayek’s discovery of the “knowledge problem” was his “most enduring legacy in economics.”

However, while powerful, the contrast he offered between individualism and collectivism was too restrictive. It omitted the fact that a great deal of dispersed (or “tacit”) knowledge was to be found in local communities, which are not market actors. Both conservative and socialist communitarian critiques of central planning escaped Hayek’s gaze.

While the Keynesian revolution seized control of Cambridge economics, the LSE became the site of the battle between the planners and market liberals. “Imagine the lucky student,” the authors enthuse, “who in the summer term of 1936-7 could watch Hayek lecture on why a collectivist economic system could not work from 5-6 on Thursday evenings, and then hear [Evan] Durbin explain how to run a collectivist economy from 6-7!”

Hayek’s classic The Road to Serfdom was the outcome of the “socialist calculation” debate. His polemical point was that while the democratic powers believed they were battling for freedom against tyranny, their commitment to “democratic” planning would inevitably lead to the same result, since it would progressively impair the market system. Churchill claimed in his losing general election campaign of 1945 that a Labour party victory would lead to a “kind of Gestapo’; but Hayek’s main popular appeal was to the anti-Roosevelt right in the USA. He never considered that Roosevelt’s New Deal might have been an antidote to serfdom rather than a prelude to it. As an American reviewer pointed out acidly: “The preparation for an electrocution and an electrocardiogram is the same, up to a point.”

The last five years covered by this volume saw Hayek build an institutional basis for free market economics. Influenced by the experience of intellectual life in pre-first world war Vienna, he had always been a man of circles and groups on the edge of standard university courses. Thus in the second world war he proposed an “English Speaking College of Social Studies for Central Europe,” located in Vienna, to educate “an elite with a certain common tradition of ideas, values and forms of discourse”: that is, a post-war Europe instructed by philosopher kings. More immediately successful and enduring was the Mont Pelerin Society, which he started in 1947 as an academy for liberal thought. This institution-building took place against the background of Hayek’s relocation from the LSE to Chicago University, where an American businessman guaranteed his salary, his messy divorce from Helena Fritsch, his marriage to his first love “Lenerl” Bitterlich and his break with his English patron Lionel Robbins.

Hayek once said that for your ideas to succeed you had to outlive those who hate them. He died in 1992, aged ninety-two, at the height of his fame. The second volume of this biography promises to be a vindication of his dictum. 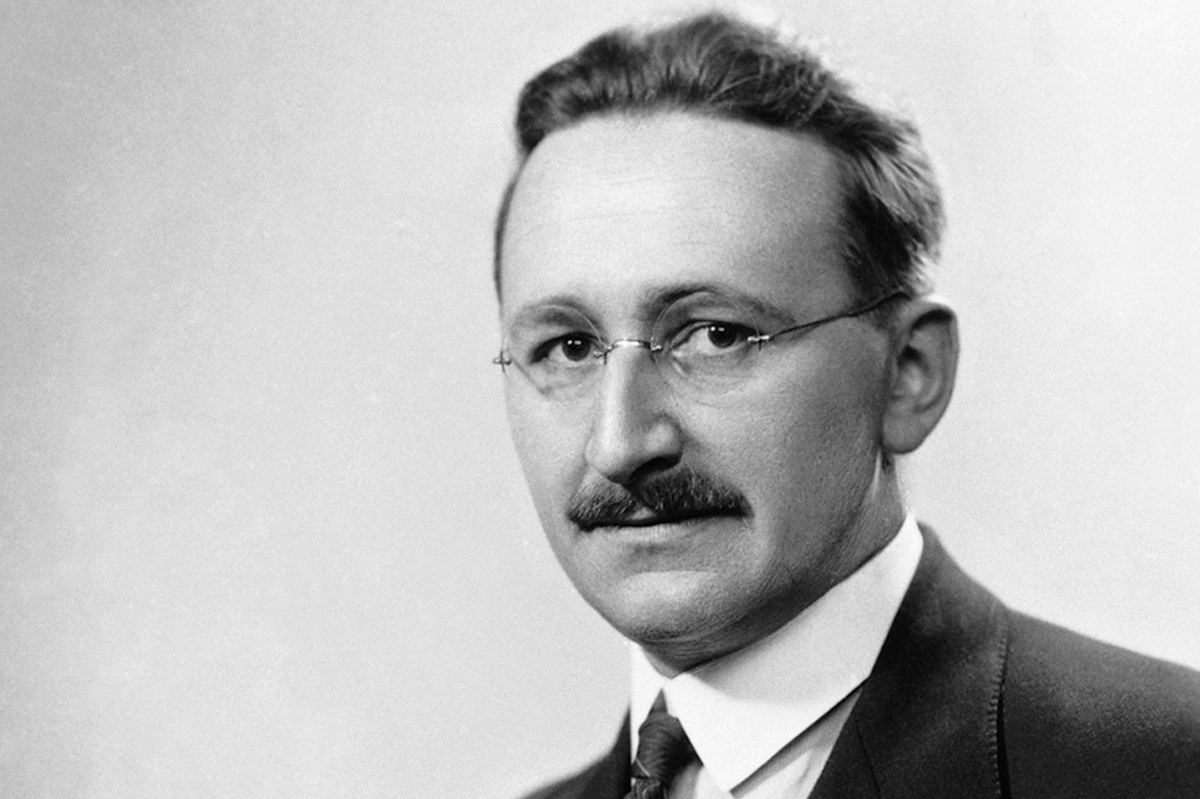 Friedrich Hayek: a great political thinker rather than a great economist