The Waste Land: A Biography of a Poem by Matthew Hollis reviewed 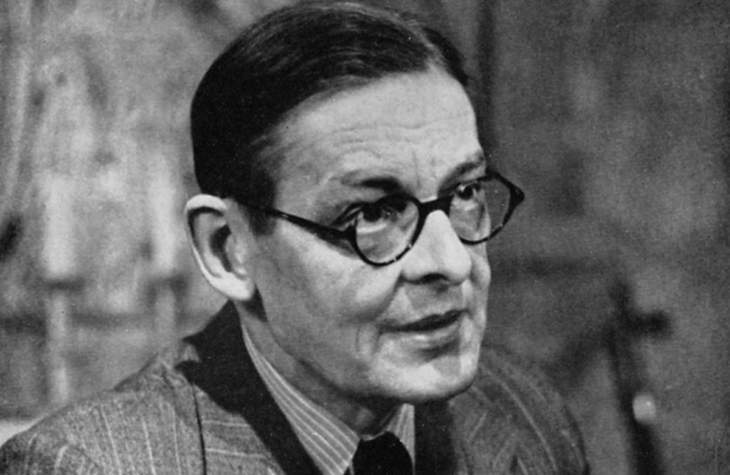 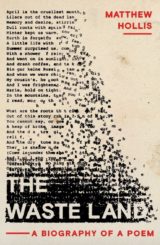 The Waste Land: A Biography of a Poem

In 2018, the ferocious American poet-critic William Logan took time off from routinely, invigoratingly eviscerating contemporary poets to write Dickinson’s Nerves, Frost’s Woods: Poetry in the Shadow of the Past — a study of classic poems in their historical contexts. It was an informative, interesting exercise, prefaced by this significant reservation: "Knowledge of the circumstance is not ipso facto knowledge of the poem."

Matthew Hollis attempts something similar: an immersion in the verité, the lost circumstances of composition. His subtitle, "A Biography of a Poem," is a brilliant piece of marketing, a hook, an attractive promise of something...

In 2018, the ferocious American poet-critic William Logan took time off from routinely, invigoratingly eviscerating contemporary poets to write Dickinson’s Nerves, Frost’s Woods: Poetry in the Shadow of the Past — a study of classic poems in their historical contexts. It was an informative, interesting exercise, prefaced by this significant reservation: “Knowledge of the circumstance is not ipso facto knowledge of the poem.”

Matthew Hollis attempts something similar: an immersion in the verité, the lost circumstances of composition. His subtitle, “A Biography of a Poem,” is a brilliant piece of marketing, a hook, an attractive promise of something new and original. Does it deliver? Or is it only a fancy way of describing the milieu, the ragbag of circumstance, from which T.S. Eliot’s great poem emerged?

For example, we learn that Ezra Pound suffered at the hands of frenemies. He was the foreign editor of Poetry, edited by Harriet Monroe. She published four extracts of Pound’s twelve-part imitation, “Homage to Sextus Propertius,” and in the very next number printed an attack on its scholarship by Professor William Gardner Hale. Premeditated sabotage. Shortly after, she accepted Pound’s resignation. When Pound’s prose Instigations (published by Boni & Liveright) appeared, it was traduced in the Dial by W.C. Blum, who averred that Pound’s prose wasn’t prose at all, but “funny oaths and insults.” Pound was a roving European scout for the Dial, garnering submissions from the likes of James Joyce. He asked Scofield Thayer, the editor, who Blum was, and received no reply. ‘“Blum” was a pseudonym for [Scofield’s] co-editor at the Dial, James Sibley Watson.’

What has this run-of-the-mill bad faith, interesting though it is (like many other peripheral facts assembled here), to do with the “biography” of The Waste Land? Hollis writes off Pound’s substantial sequence “Hugh Selwyn Mauberley”: “The poem would not sustain through time in the way that Eliot’s work would.” In other words, it wasn’t a commercial success. Nothing to do with literary merit, then. The terrific “Homage to Sextus Propertius” never recovered, in Hollis’s account, from Gardner Hale’s attack on its “errors” of translation. He has nothing to say about Pound’s great sequence, the Cathay poems.

Though it isn’t clear — it would be embarrassing if it were — I think Hollis means to float the deniable but ironically appealing proposition that Pound’s editorial work on The Waste Land manuscript was his greatest poetic achievement:

They [Pound and Eliot] had found a way for the poem to exist within them both at the same moment, possessed by neither but possessing of both. In that instant, the poem was neither Eliot’s composition nor Pound’s editorial but a common project, equally imagined, inhabiting each man simultaneously and fully. The poem had been an event occurring in both men in unison, in creator and critic, in poet and reader, in two halves of a combining mind.

A plangent pronouncement, strangely reminiscent of George Steiner and his weakness for critical overreach. What Pound did, manifestly, was eliminate the weaker passages, some of them, surprisingly, downright bad — creating for posterity the illusion that Eliot couldn’t put a foot wrong. Hollis’s take on Pound as Eliot’s temporary Siamese twin is a sentimental, provisional, crowd-pleasing, vulgar flourish.

The Gestalt of creation is part of Hollis’s project. For example, there are several typewriters in his account: Eliot’s; the replacement supplied by his brother Henry; Pound’s; a sheet of purple italics composed on a Blickensderfer. Here we are at the very moment Eliot types out his first title, “The Burial of the Dead”:

Eliot’s typewriter had seen better days. It was a Corona, “my wretched old one,” that he had carried over in his suitcase from Harvard in 1914. Since then, seven years of essays and letters and poems had worn thin the mechanism, landing his heavily used vowels unevenly above the baseline. As he sat before it in the winter of 1921, he centered the carriage and depressed the shift lock. The strikers swung up from the type basket, prompting the escapement forward, letter by letter: a title, concluded as were all his titles, with a terminal point. THE BURIAL OF THE DEAD. He rolled the platen twice for a two-line drop and began to type the poem’s opening.

Rather effective, rhetorically. But does Hollis understand the poem as well as he understands the manual action of the Corona? In so far as it is possible to discern an overview, Hollis favors the idea that The Waste Land is about the failure of Eliot’s marriage: Vivienne Haigh-Wood and Eliot’s break with his father when Eliot Senior put his property in trust. This isn’t clearly elucidated, but for Hollis it explains the recurrent motif from The Tempest in The Waste Land: “Those are pearls that were his eyes.” Eliot père disapproved of Vivienne and arranged for Eliot’s inheritance to revert to the family in the event of Eliot’s death. Actually, the father appears to have been generous. He advanced a year’s rent when asked and paid the premium on a $5,000 insurance policy in his son’s name. There were constant handouts as well as suits and overcoats. Eliot gave every appearance of gratitude, though he wrote to his brother Henry (November 5, 1916) that he would like Vivienne to be treated as one of the family in the event of his death.

As an overview, this book is partial. It ignores the theme of time as an omnipresent (“Mixing memory and desire,” past and future) and the equally central idea of previous lives. “Stetson! You who were with me in the ships at Mylae!” is a simple pointer: Stetson is a modern American, as his name indicates, and Mylae is a battle at sea in 260 BC where Rome defeated Carthage. For Hollis, this crucial line is an (obscure) allusion to John Maynard Keynes on the “Carthaginian Peace” of Versailles in 1919. A misstep in the wrong direction.

One of several. It isn’t convincing to read the Sanskrit imperatives at the poem’s end — Datta, Dayadhvam, Damyata, Give, Sympathize, Control — as a reference to the
brain control” treatment of Dr Vittoz that Eliot underwent in Lausanne. An example of empty opportunism. We encounter a critical vocabulary of resonant baloney: “He was reaching for something more oblique and musical – a hovering intelligence”; “finding metrical force in the movement of the physical world around him”; “it seemed scrawny somehow, disheveled not only in content but also in form… it had yet to think musically [my italics].” Elsewhere, pseudo-scientific flapdoodle:

If you experience the cadence then you animate the image, and if you can do that, then you have communed through your senses with the poem before it has been decoded by the brain phenomenologically.

Hollis appears to understand neither the objective correlative nor the auditory imagination. And he favors reiteration, the medley, summary rather than analysis:

The arid places of April had become the stony places of imminent thunder, the drowned father with pearls for eyes was now dead as the living are now dying, the deep elemental images of water and rock had fused in the prison and palace and silence and solitude of the mountains under which he wrote, the primitive in the rock, the faces in the rock; the eerie company of the other beside you, always another walking beside you, friend or father or spiritual ghost, the dissolving cities and the memory of bells.

Not criticism, then; rather a kind of cut-down karaoke. 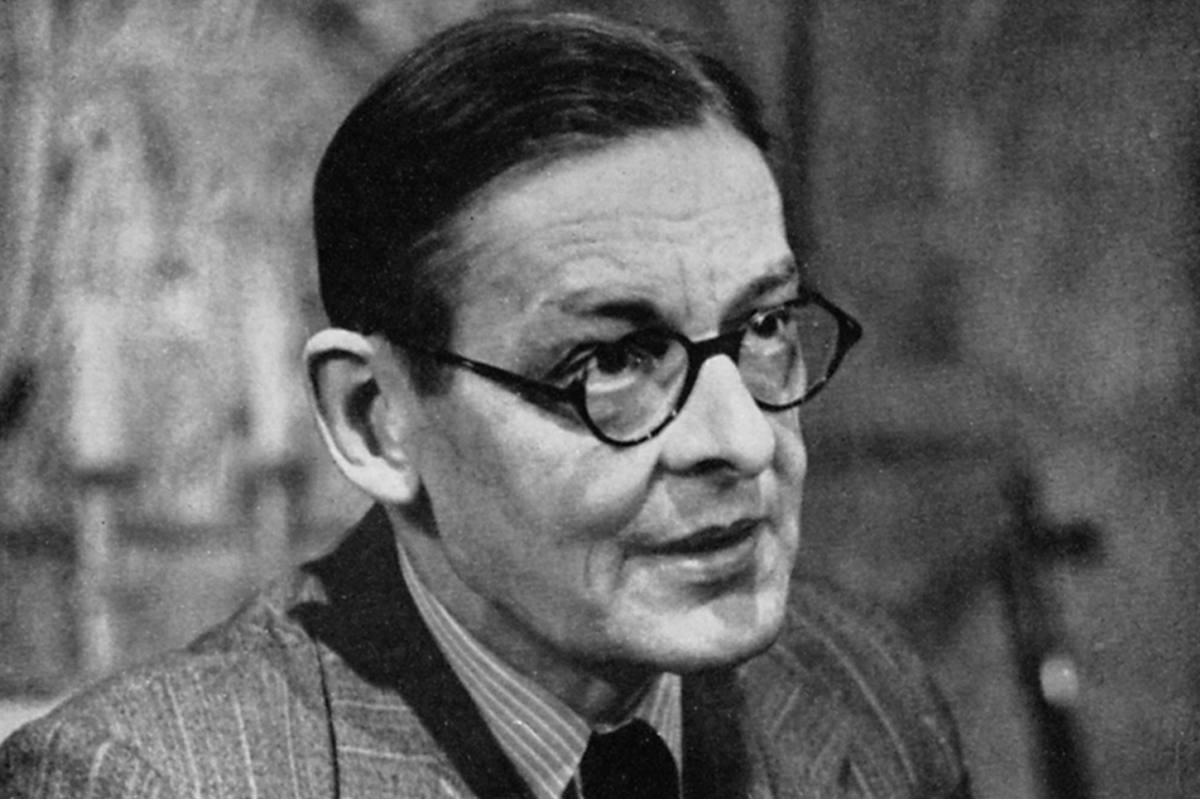