Diplomatic daughters go behind the scenes at Yalta

The Daughters of Yalta: The Churchills, Roosevelts and Harrimans: A Story of Love and War by Catherine Grace Katz reviewed 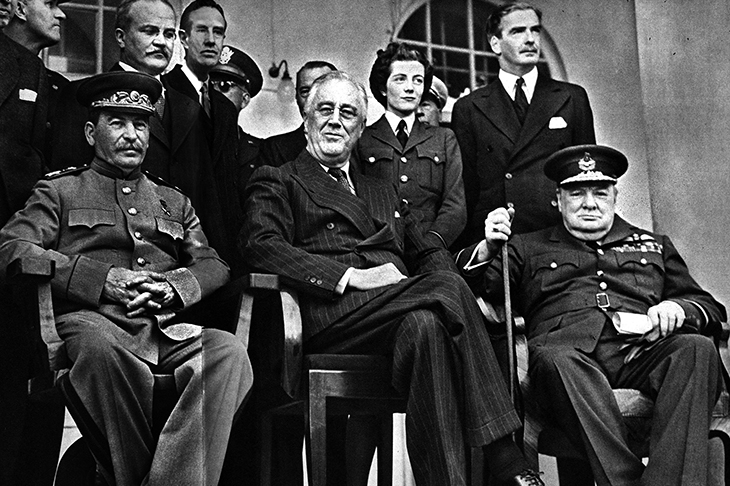 Sarah Churchill with the Big Three at the Tehran Conference in 1943. She would be Winston’s all-round protector, supporter and confidante at Yalta two years later (Alamy)

Diplomatic daughters go behind the scenes at Yalta

From Downing Street to Pennsylvania Avenue, history’s powerful inter-family influencers, whether spouses or children, have long operated behind weighty political front doors. With an unerring eye for the revealing detail, Catherine Grace Katz has uncovered a fascinating generational back-story to the Yalta summit of February 1945.The three varyingly spirited daughters of Churchill, Roosevelt and Averell Harriman who accompanied their world-leading fathers to the freezing bleakness of the Crimea to thrash out terms for ending World War Two all played their crucial role. As Churchill and his second daughter Sarah crossed the Crimean steppe to the...

From Downing Street to Pennsylvania Avenue, history’s powerful inter-family influencers, whether spouses or children, have long operated behind weighty political front doors. With an unerring eye for the revealing detail, Catherine Grace Katz has uncovered a fascinating generational back-story to the Yalta summit of February 1945.

The three varyingly spirited daughters of Churchill, Roosevelt and Averell Harriman who accompanied their world-leading fathers to the freezing bleakness of the Crimea to thrash out terms for ending World War Two all played their crucial role. As Churchill and his second daughter Sarah crossed the Crimean steppe to the sulfurous muddy peninsula in the Black Sea they drove through countryside where ‘nearly all the buildings lay in scorched ruins’. Stalin’s devastating regime was unmissable.

Roosevelt had traveled the 6,000 miles with his only daughter Anna, still disguising from onlookers his dependency, as a long-term polio victim, on a wheelchair. Harriman, America’s glamorous, wealthy ambassador to Russia, arrived from Moscow with his youngest daughter Kathy to join the Russian leader Joseph Stalin, a man whom they had once ‘jocularly referred to as Uncle Joe’.

Each head of state came with his own tactical priority. Stalin had his eye on Soviet expansion into Poland; Roosevelt was troubled by Japan and wanted Russia’s support in the Pacific, while the protection of Europe from Russian dominance was top of Churchill’s agenda. With their fly-on-the-wall observations of the tensions and behavior of other delegates, the daughters provided practical and emotional support to the fathers which became personally and politically indispensable.

Sarah Churchill a former actress and Waaf officer was Winston’s ‘all-round protector, supporter and confidante’. Kathy Harriman was a first-class ski champion, former journalist, fluent Russian speaker and the apple of her father’s eye. Married mother of three and former local newspaper editor Anna Roosevelt had long sought her father’s approval. Diligently assuming her self-appointed role to disguise from FDR’s co-delegates the severity of her father’s congestive heart failure she also concealed her own awareness of that frailty from Roosevelt himself, as well as hiding his intimate friendship with another woman from her suspicious mother Eleanor.

Stalin was the only leader not to bring a daughter with him. Instead, his sinister head of the secret police, Lavrentiy Beria, who had ‘raped women with the fury of an addict’ and whom Stalin regarded as ‘our Himmler’, fulfilled that supportive and confidential role.

An airplane hangar full of caviar, a bottomless well of vodka and an army of bedbugs was waiting in Yalta for the ‘Big Three’ and their 535-strong entourage in three semi-derelict mansions, once the summer palaces of the czar and the aristocracy. The juxtaposition of ‘opulence and primitiveness’ characterized the summit, as the pomp and circumstance of official business contrasted with the absurd discomfort of the rickety, unhygienic beds and such a chronic shortage of lavatories that early in the morning Sarah would see ‘three field marshals queuing for a bucket’. However, the Russian hosts remained eager to please. Sarah’s request for a slice of lemon to squeeze on the ubiquitous caviar prompted the delivery of a tree laden with fruit, although a suggestion that Russian women might act as hot-water bottle substitutes was politely declined by the daughters.

Set during the deepening chill of the impending Cold War, personal secrets tumble from the letters Kathy writes to her friend Pamela, Churchill’s 30-year-old daughter-in-law and one-time lover of Kathy’s father; from Sarah’s witty accounts to her mother, and from Anna’s reports to her husband, including the news of Kathy’s brief affair with her own married brother, FDR Junior.

Making superb use of unpublished diaries and letters, Katz demonstrates how illness, clandestine romance and fraying political relationships ran alongside the tortured negotiations that would shape the post-conflict world. She also describes how the young women, denied entry to the conference room itself, were ‘dumfounded’ by the revealing diversionary expeditions arranged by their hosts — especially by the ruination of the once beautiful Sevastapol, now a ‘wilderness’ in which ‘buildings are smashed beyond recognition’.

Towards the end of the week as the extent of Stalin’s treatment of his fellow countrymen became increasingly apparent and his territorial ambitions began to dominate the conference, Katz re-creates with chilling power the dinner party from hell given by Stalin for the inner core of delegates. As the suckling pig is served, Beria, a man notoriously fond of ‘sexualized banter’ fixes Anna with his ‘thick lips and bulging eyes’, making his intentions unequivocal.

In Daughters of Yalta, the women’s keyhole perspective of these momentous negotiations humanizes the Yalta summit as never before, shedding new insight on the minute-by-minute tensions of international diplomacy at a time when the future of millions depended on the outcome.