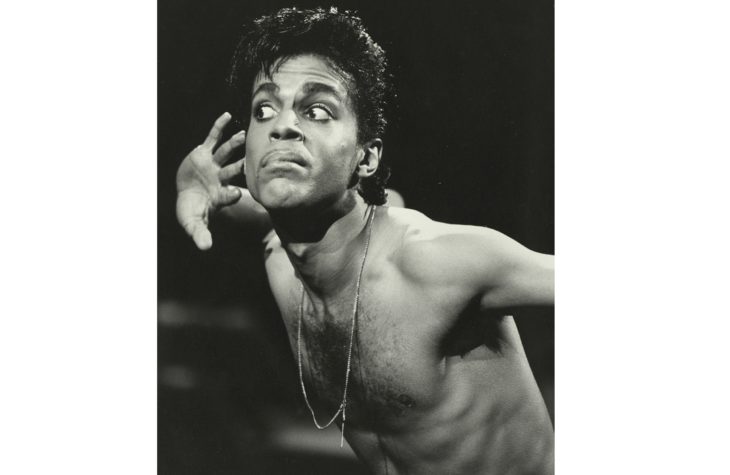 In 1992 Prince released a single called ‘My Name Is Prince’. On first hearing it seemed appropriately regal. Cocky, even. Only in hindsight did it appear somewhat needy, a litany not of what Prince was going to do, but of the things he had already done. On it, he pulled rank on his status — ‘I’ve seen the top and it’s just a dream / Big cars and women and fancy clothes’ — called out young rappers for their potty mouths, and declared himself ‘fresh and funky for the 90s’.Context is everything. By 1992, Prince...

In 1992 Prince released a single called ‘My Name Is Prince’. On first hearing it seemed appropriately regal. Cocky, even. Only in hindsight did it appear somewhat needy, a litany not of what Prince was going to do, but of the things he had already done. On it, he pulled rank on his status — ‘I’ve seen the top and it’s just a dream / Big cars and women and fancy clothes’ — called out young rappers for their potty mouths, and declared himself ‘fresh and funky for the 90s’.

Context is everything. By 1992, Prince was still funky — but fresh? He had been, indisputably, pop’s premier agitator throughout the previous decade; as David Bowie was to the 1970s, so Prince was to the 1980s. Creatively restless, staggeringly prolific, sexually provocative, he juggled commercial viability with the artily off-beam. From Dirty Mind in 1980 up to and including Lovesexy in 1988, every album was an unmissable event.

And then, almost imperceptibly at first, he started losing altitude. Times changed. The ascendancy of hip hop presented a direct challenge. With rap, Prince finally discovered a musical pursuit at which he didn’t excel, not that it prevented him from trying. For the first time he was a follower, not a leader; his aura of invincibility slowly dissolved. Between 1995 and his death in April 2016, Prince’s reputation rested on his back catalogue and his prowess as a performer. In other words, by his mid-thirties he had succumbed to the fate of most of his peers.

Posthumously, his work has been subject to the standard revisionist blitz. While the emphasis has fallen on the 1980s, the latest releases focus on two relatively unheralded works, The Rainbow Children (2001) and One Nite Alone… (2002). The former is a jazz-fusion ‘message’ album centered on esoteric religious themes; the latter a concise solo record, gifted to members of his fan club, featuring mostly just Prince and his piano.

They are in many ways typical of his post-peak output, which is often unfairly dismissed en masse with a single sweep of the hand. Prince was the Peter Cook of pop, a unique talent who spent the second half of his career living down the sheer audacity of the first, yet always remaining capable of flashes of genius. On ‘Don’t Play Me’, a good song from 1997, he sang: ‘My only competition is, well, me in the past.’ It’s funny, but it also acknowledges the curse of legacy. Enjoying Prince post-1992 involves an unspoken pact. No comparisons. No fair.

There was no obvious waning in his skills as a vocalist, performer, and instrumentalist. The problem was an acute lack of focus. An inspirational creator, Prince was a poor curator of his work. Ironically for an artist who loathed the way music was used and abused by the internet, his prolific output pre-empted the aimless saturation of the streaming age. From the start, he bristled at the confines of the album form and the industry’s rigid release schedules. Attempting to pour an ocean of material into an egg cup, at first he siphoned off songs for other artists and hoarded material in his vault.

Later, he simply flooded the market, to the point where his productivity began to look like a weakness. A feud with his record company, Warner Brothers, led first to him handing over shoddy albums in order to fulfill his contract, then leaving. In a further fit of pique, he changed his name to an unpronounceable symbol. There were other troubles: the death of his days-old son from Pfeiffer syndrome in 1996; a divorce in 2000. Prince always gave off a slightly otherworldly aura, but listen to his lyrics and you hear a man who felt life deeply.

Any Prince fan cognizant mostly with his classic albums and seeking to widen their knowledge is not advised to begin with The Rainbow Children. It is overlong, musically fussy, and further muddied by lyrics that obsess over Prince recently becoming a Jehovah’s Witness. What was good for his soul wasn’t necessarily great for the music. Though he had always channelled God, post-conversion Prince grew shy of the more lascivious parts of his nature and indulged a tendency to preach.

The other reissue, One Nite Alone…, is better. It includes a lovely version of Joni Mitchell’s ‘A Case of You’ and the brooding ballad, ‘Avalanche’, which deconstructs the legacy of Abraham Lincoln. It is released with a box set of concert recordings from the related tour, One Nite Alone…Live, which proves that, if nothing else, Prince’s talents as a live performer were never in question. One Nite Alone… supports the theory that his more successful later albums often cleave to a unifying impulse. The Truth, a bluesy semi-acoustic disc from 1997, doesn’t set the heather on fire but offers a pleasing consistency of style and intent. Plectrumelectrum, the album he made in 2014 with the all-female trio 3rdEyeGirl, makes a cohesive virtue out of raw funk-rock.

If there is a sustained and easily negotiable sweet spot in Prince’s later work it’s to be found in the middle of the first decade of the new millennium. Restored to his full name, he returned to a major label, Sony, and mustered his forces for Musicology (2004), a focused, commercially appealing, occasionally terrific album. He followed it with the excellent 3121, which gave Prince his first US number one album since Batman in 1989. Its best song, the lean, lubricious ‘Black Sweat’, could hold its own on any of his 1980s records.

His next major release, Planet Earth (highlights: ‘Chelsea Rodgers’; ‘Guitar’), is solid, too, though at the time its perceived value was damaged by the fact it was given away free in the UK with a Sunday newspaper. Prince’s reluctance to allow his music to appear on any of the major digital platforms ensured that, whatever their merits, increasingly few outside of his diehard fanbase heard his later albums. A string of intimate impromptu European shows with 3rdEyeGirl in 2014 raised far more heat than Prince’s final, inconsistent albums, Hit N Run Phase One and Two.

To the end, however, he remained capable of real quality. Baltimore, released in 2015 and inspired by the Black Lives Matter movement, is catchy, engaged and well worth a listen. As with much of this stuff, it’s simply a question of having the patience to dig out the diamond from the coalfield, the pearl from the mantle.

Prince’s albums The Rainbow Children and One Nite Alone… have been reissued on CD and vinyl by Legacy Recordings. This article was originally published in The Spectator’s UK magazine. Subscribe to the US edition here.