Tintoretto looked not up to heaven, but down to the fallen angels of our modern age 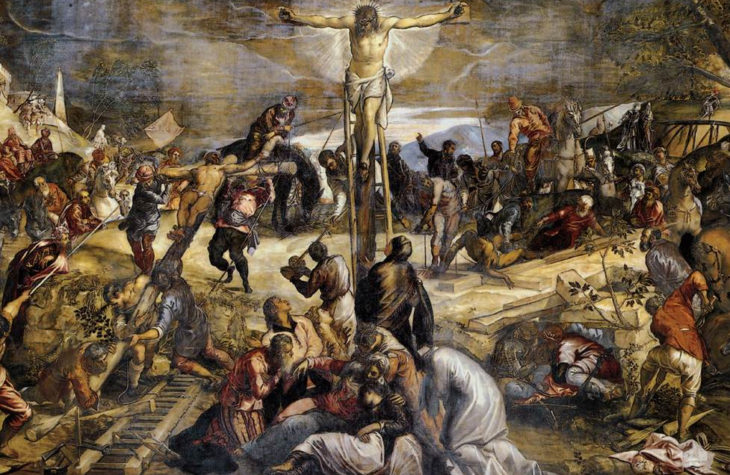 With these words, supposedly written on his studio wall, Jacopo Tintoretto staked his claim on cinquecento painting. We are lucky he failed on both counts. Tintoretto was no Michelangelo or Titian, but he could push paint like no one else in La Serenissima. Renaissance means ‘rebirth’, of course. Yet the paintings of Tintoretto can come as deadly shock. His ‘Crucifixion’ of 1565 in Venice’s Scuola Grande di San Rocco strikes like a thunderbolt. The painting is also the...

With these words, supposedly written on his studio wall, Jacopo Tintoretto staked his claim on cinquecento painting. We are lucky he failed on both counts. Tintoretto was no Michelangelo or Titian, but he could push paint like no one else in La Serenissima. Renaissance means ‘rebirth’, of course. Yet the paintings of Tintoretto can come as deadly shock. His ‘Crucifixion’ of 1565 in Venice’s Scuola Grande di San Rocco strikes like a thunderbolt. The painting is also the single best work of religious art in the Italian Renaissance. With Christ fixed to the cross front and centre, the action of this composition swirls around him like a dark cyclone. Everyone — carpenters, soldiers, a dog — makes up ‘a centrifugal energy that charges the entire picture’, as the late art historian David Rosand wrote. As onlookers gazing up as Christ stares down, we too are swept up in the storm.

With expressive, brooding, and in-your-face energy, Tintoretto never sought the safety of the neo-Platonic shore. In his draftsmanship, he did not trace out the idealised forms of Michelangelo. In his choice of colour, murky at best, he did not seek the fuzzy warmth of Giorgione. Yet with speed and drive, Tintoretto swept through the 16th-century scene by looking, not up to heaven, but down to the fallen angels of our modern age. He went low when Titian and Veronese went high.

As we mark the 500th anniversary of his birth with exhibitions stretching from the Doge’s Palace in Venice to the house of Morgan in New York City, the wild child of the Venetian Renaissance is receiving his due. In New York, Drawing in Tintoretto’s Venice at the Morgan Library & Museum explores the draftsmanship of this son of a dyer — tintore — in comparison to works by Titian, Veronese, Bassano, and others. Meanwhile at the Metropolitan Museum, Celebrating Tintoretto: Portrait Paintings and Studio Drawings, a focused exhibition in the Robert Lehman Wing, looks to the painter’s quick-fire portrait studies.

Sacco di Noce — ‘bag of nuts’. That’s how Tintoretto’s figuration came to be known, in particular for the dashed-off studies on paper of his later career. What sounds like an insult, in fact, signals an expressive brilliance. Lacking time and inclination, Tintoretto refused to labour over sculptural shading. At the Morgan Library, the torso of his ‘Seated Male Nude’ (c. 1549), on loan from the Louvre and reproduced on the cover of the exhibition catalogue, looks like it ingested some bad shellfish. His ‘Seated Man with Raised Hand’ (c. 1577–78), from nearly two decades later, resembles nothing less than an aquaman pulled from the rippling Grand Canal. The wavy lines of these drawings do not have a sculptural meaning. But they have an expressive feeling — queasy, awkward, very human, very off.

By focusing on works on paper, with seventy drawings by Tintoretto and his circle now on view, the Morgan show makes the case for a ‘drawing school of Venice’. That’s the title of the first chapter of the catalogue, but it ends with a question mark. Ever since their disparagement in Giorgio Vasari’s Lives of the Artists, the idiosyncratic drawings of Venice have been considered a poor imitation of the Florentine school. An opening example here by Titian, ‘Embracing Couple’ (c. 1568-70), should not give Michelangelo or Leonardo cause of concern over the grading average of the drawing school curve. A tangle of marks, with bodily forms barely discernible, Titian’s drawing appears entirely preliminary, a primo pensiero. But more than that, it seems built up and worked over, as if you were applying layers of paint to canvas rather than lines of charcoal to paper. In other words, here is the richest of painters with the poorest sense for basic draftsmanship.

The exhibition follows through with examples by Andrea Schiavone — the ‘Slav’ — who avoided the whole disegno-colorito feud by finding some fusion of the two. His ‘Apostle (St Matthew)’ (c. 1550), and ‘Virgin Annunciate’ (c. 1550-60) of ink, chalk, watercolour, and wash are drawn paintings — or maybe that should be painted drawings. The Venetian Jacopo Bassano went with a similar approach, using coloured chalk to give some heft to his sketchy figures. Meanwhile, practice makes perfect, and Paolo Veronese, ever the dutiful student, drew study after study in pen and brown ink. In ‘SS. Leonard, Mark, and Francis’ (c. 1549-51), he arrived at his own Venetian sense for sharpened form with highlights of white gouache.

Yes, there was a drawing school of Venice. Tintoretto started his own. At the Morgan, there are several examples of the students in his workshop drawing studies of Grimani Vitellius, or at least a fleshy cast of him, all from slightly different angles. There are also numerous attempts by the Tintoretto Workshop at depicting a cast of Michelangelo’s ‘Samson and the Philistines’. Of Tintoretto’s many pupils, Palma Giovane may have been his best. With white paint over brush and brown, he traces the light reflecting off Michelangelo’s bronze like muscles beneath oily skin. Meanwhile Domenico Tintoretto, Jacopo’s son, carries on the family name with drawings that look to the female nude laid bare in a newly naked way, unidealised and full frontal, from the bottom up.

At the Metropolitan Museum, the diminutive scale of the Celebrating Tintoretto exhibition belies the birthday party within. For someone known to go big, Tintoretto painted some of his most arresting portraits small. Collected in a single room in the Lehman Wing, the show looks behind the quickfire brushwork, or prestezza, for a selection of personal portrait studies, some of which informed larger compositions. Along with drawings from the Lehman collection by Domenico, these closely cropped figures appear out of the darkness in a raking light. Like the ‘Crucifixion’ in the Scuola di San Rocco, they also face us head on.

There is nothing idealised, nothing reserved in their poses. Focused on the elders of the Venetian Republic, these are powerful portraits of powerful men, and they glare back from the canvas. Tintoretto may not have had the drawing of Michelangelo or the colour of Titian. But in his stare, he was death in Venice.

James Panero is the Executive Editor of the New Criterion.