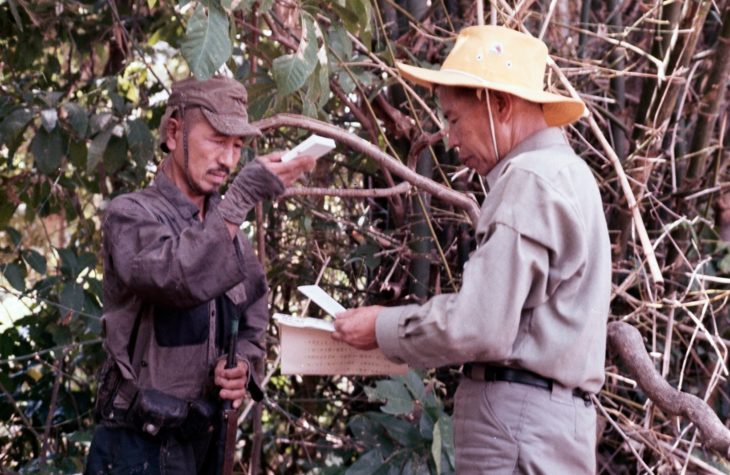 Japanese soldier Hiroo Onoda in the Philippines jungle, receiving orders from his former commanding officer to surrender in 1974 (Asahi Shimbun/Getty)

It’s well known that you should never meet your heroes because they will only disappoint you. Less commonly said, but equally true, is that you should never google your favorite podcast hosts, because their face will not match their voice. I have just finished looking at photos of Dan Carlin, the host and sole narrator of Hardcore History — the world’s greatest podcast — and I find myself disappointed. He’s a perfectly nice-looking man: bald, medium build, squarish of face. But he doesn’t look like I want him to.Why do we think we can imagine someone’s...

It’s well known that you should never meet your heroes because they will only disappoint you. Less commonly said, but equally true, is that you should never google your favorite podcast hosts, because their face will not match their voice. I have just finished looking at photos of Dan Carlin, the host and sole narrator of Hardcore History — the world’s greatest podcast — and I find myself disappointed. He’s a perfectly nice-looking man: bald, medium build, squarish of face. But he doesn’t look like I want him to.

Why do we think we can imagine someone’s face just from the sound of their voice? It’s a mysterious but enduring illusion, like the image you have of a place before you visit, which you never quite forget. Since Dan Carlin’s low American growl is one of the world’s best voices, let me tell you how I imagine him: in my mind he has a thick beard and deep-set gimlet eyes. Broadcasting into a metal microphone from a bunker in the American wilderness, he wears old combat fatigues that are frayed and patched at the elbows. On the desk beside him, alongside a pile of maps and military encyclopedias, is a survivalist’s tin of beans, from which he stops every now and then to eat with a whittled wooden spoon before resuming his narration.

If that sounds rather detailed to you, then it’s because I have spent an inordinately long time listening to this man speak. There are no interviews on Hardcore History, no music and almost no soundbites or recordings from elsewhere. It’s just Dan Carlin, talking about history. Yet it is the only podcast that unites my Gen Z brother and 93-year-old grandmother in admiration. My parents listen to the five-hour episodes on long drives — currently unable to travel, they tell me they’re thinking about driving the London Orbital simply as an excuse to listen.

Carlin’s passion is military history and war; he calls it the study of human beings in extremes. As you may have gathered, he has a Barnum & Bailey flair with titles and presentation (see: ‘Blueprint For Armageddon’, his six-part series on World War One, or ‘Celtic Holocaust’, his account of Caesar’s Gallic wars). I have no interest in military history — I don’t know the date of the Battle of Waterloo — but Carlin is a podcasting Midas and everything he touches turns into something interesting. I would be happy listening to him read the phone book.

The current series begins with the story of Hiroo Onoda, a Japanese soldier who fought in World War Two, being discharged from war duty in the Philippines by his commanding office. The date of his discharge? The ninth of March 1974. Onoda was 51 years old. For 30 years, he had been fighting an imaginary war: shooting at civilians, burning farmers’ crops and sleeping in the mud. His rifle was still in good working order. Onoda wasn’t even the only Japanese soldier to lay down arms that year.

Carlin’s starting question is this: what type of society, what schooling, what parenting, what set of norms, rules, traumas, ideals and passions can make a human being prepared to fight a private war for three decades? It’s the kind of question that can never be answered in full, but it sets the ball rolling through hundreds of years of Japanese history. A year after the first episode launched, we have come through the 19th-century reopening of the country, the invasion of Manchuria, the bombing of Pearl Harbor, and arrived at part five: a gripping and awful account of the fighting that took place on New Guinea between Japanese and allied forces.

The war that was fought on New Guinea was as brutal as any other in human history. The Japanese army was highly trained and fanatical. The code of honorable surrender broke down as unit after unit, rather than letting themselves be captured, fought to the last man. Carlin barks out — for some reason, he always shouts when quoting any written material, a presentational tic that becomes inexplicably charming — the analysis of the historian Eric Bergerud: ‘By breaking down the fragile restraint afforded by honorable surrender…the Japanese opened the floodgates for war without mercy.’ What inevitably followed was dirty fighting, the murder of prisoners and non-combatants, torture. War is hell, but even hell has its higher and lower chambers: in New Guinea, both sides were engaged in a race to the bottom. It’s a terrible and extraordinary story, and you could do much worse than hearing it from Dan Carlin.