Where did all the Chippendales go? 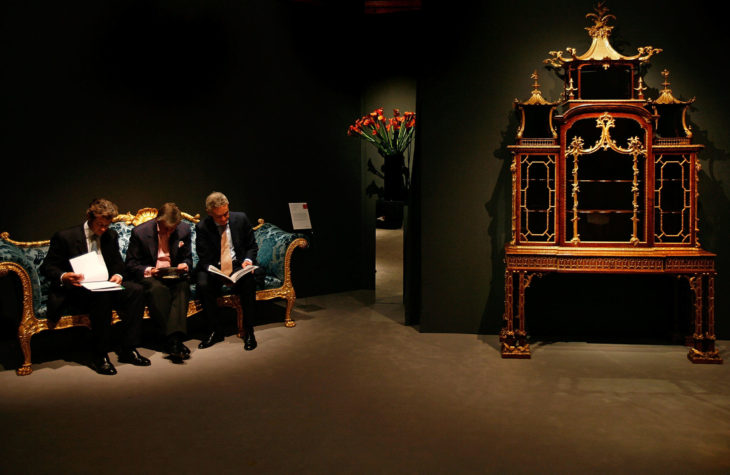 LONDON – JUNE 13: Christie’s employees and a client sit on The Dundas Sofa by Thomas Chippendale, designed by Robert Adam, while they inspect a Thomas Chippendale masterpiece named ‘The Kenure Cabinet’ (right) on June 13, 2008 in London, England. The sofa is estimated at 800,000 – 1,200,000 GBP, the cabinet at 2.5 – 4 million GBP and both items will go on sale at Christie’s Exceptional Furniture sale on June 18, 2008 with 10 other items of British masterpiece furniture. (Photo by Cate Gillon/Getty Images)

Where did all the Chippendales go?

It all began with the orders. In the preface to his Gentleman and Cabinet-maker’s Director (1754), Thomas Chippendale started with ‘an explanation of the five Orders’ — those foundations of all architecture, the Tuscan, Doric, Ionic, Corinthian, and Composite. ‘Without an acquaintance with this science,’ he continued, ‘the cabinet-maker cannot make the designs of his work intelligible.’

Nearly two hundred years later, Evelyn Waugh said much the same thing. Writing in 1938 in Country Life, Waugh noted that by learning the orders of architecture, ‘you can produce Chippendale Chinese; by studying Chippendale Chinese, you will produce nothing but magazine...

It all began with the orders. In the preface to his Gentleman and Cabinet-maker’s Director (1754), Thomas Chippendale started with ‘an explanation of the five Orders’ — those foundations of all architecture, the Tuscan, Doric, Ionic, Corinthian, and Composite. ‘Without an acquaintance with this science,’ he continued, ‘the cabinet-maker cannot make the designs of his work intelligible.’

Nearly two hundred years later, Evelyn Waugh said much the same thing. Writing in 1938 in Country Life, Waugh noted that by learning the orders of architecture, ‘you can produce Chippendale Chinese; by studying Chippendale Chinese, you will produce nothing but magazine covers.’. One sees Waugh’s point — to practice architecture, or design of any kind, effectively, a return to first principles is necessary. But what, exactly, do the architectural orders have to do with ‘Gothick Chairs’ of the kind Chippendale illustrated in his exceedingly influential catalogue?

The argument might proceed something like this: the orders are the basis for all architecture; furniture, as an accessory to architecture, benefits from harmonising with its building. Ignore the fact that much of Chippendale’s work is astylar — especially the famous chairs.

A more plausible explanation for Chippendale’s appeal to Antique authority is that it was simply de rigueur. In the 18th century, a paean to the orders was crucial in any book of architecture. It lent the work an air of legitimacy, especially for writers of uncertain social standing. Giacomo Leoni, an architect recently arrived in London from Italy, couldn’t help himself when publishing the first English translation of Palladio in 1715 — he felt compelled to include his own ‘short treatise on the five orders’. This was little more than showing off. And Chippendale, like Leoni, was a man on the make.

Chippendale’s illustrations of the orders of architecture in his 1754 Director had been copied from a 1732 publication by James Gibbs, the architect of St Martin-in-the-Fields. Of obscure Yorkshire origins, Chippendale had come down to London by 1748, marrying Elizabeth Redshaw at St George’s Chapel, Hanover Square, fashionable even then.

The Metropolitan Museum of Art’s current exhibition ‘Chippendale’s Director: The Designs and Legacy of a Furniture Maker’ (on view through January 27, 2019), makes the case that ‘Throughout the late 19th and early 20th centuries, nostalgic representations of Chippendale-style furniture transformed his work into a sacred relic of America’s founding families and Britain’s golden age.’

This is a grandiose claim, but one that holds up, at least in an American context. The exhibition includes paintings from Charles Willson Peale and John Mare, both early American portrait painters of the colonial gentry, whose subjects are depicted in the company of elaborate carved mahogany chairs — if not Chippendale originals, then at the very least inspired by the great cabinet-maker.

It is a curious fact of Chippendale’s Director that its success was concomitantly its downfall. Chippendale freely included complete instructions for fellow cabinet-makers to copy his designs. This resulted in the ubiquity of said designs, but also their bastardisation by lesser artisans. While Chippendale had ‘given no design but what may be executed with advantage by the hands of a skillful workman’, plenty of unskilled workmen had a try, sometimes with comically bad results.

As I prefer all exhibitions with a bit of levity, I wish the Met had larded the show with some of these attempts after Chippendale.

A mahogany chest of drawers executed in Philadelphia c. 1765, and more or less faithfully after an original drawing in the Director, shows how even fidelity to Chippendale’s own designs was no guarantee of a successful cabinet. Sometimes the designs themselves were the problem. No amount of expertly carved scrollwork can save a cabinet whose finial is a quarter-length bust. When the source material fails, so will the provincial interpretations.

Despite the unevenness of Chippendale’s designs, his furniture has long been valued by the market. Part of this is provenance-driven. Much of Chippendale’s production consisted of furniture for the great and good, an audience he courted explicitly in the Director. The Gentleman came first in the title, before the Cabinet-maker to whom the book would have been of practical use. Despite this ambition, 259 of the original 308 subscribers were Chippendale’s fellow tradesmen. But what nobles did cotton to Chippendale ensured his reputation.

Part of his success surely resulted from associations with the leading architects of his day. He worked alongside Robert Adam at Nostell Priory, Kenwood, the Arlington Street London house of Sir Lawrence Dundas, and Dumfries House in Scotland, perhaps the best intact collection of Chippendale furniture today. Prince Charles’s work in saving the contents of Dumfries, and his continued patronage of the house, has surely lent Chippendale’s wares further prestige.

We are now in an anniversary year, 300 years since Chippendale was born. Christie’s held a small sale in London this July, with 17 lots ranging from ‘by Thomas Chippendale’ to ‘attributed to Thomas Chippendale’ to ‘possibly by Thomas Chippendale’. While the prices recorded show continuing interest in Chippendale’s wares — an Indian rosewood dressing bureau of ca. 1770–75 made for either Robert Child of Osterley Park or the Earls of Athlone fetched $550,110 — the larger story is that even verified Chippendale originals are not guaranteed to come close to their high auction estimates. The bureau in question missed its top mark by nearly $112,200.

All this points to a larger decline in what is known in the trade as ‘brown furniture’. It is a truism now that brown furniture is dead; wounded first by Adolf Loos, who declared in 1911 that ornament was crime; further scarred by the Bauhaus, who wanted ‘an architecture adapted to our world of machines, radios, and fast cars’; and then killed summarily by Corbusier and his unmerry band of totalitarian architects, for whom comfort was anathema. How could one place a sumptuous, carved chair in a glass box? It simply wouldn’t do.

By 2009, Country Life, which would know, declared that ‘traditional “brown” furniture has never been cheaper’. In 2017, Huon Mallalieu, writing for the Times of London, repeated the conventional wisdom: ‘It has become an established truth that there is no market for “brown”, except, as always, at the very top, where quality and provenance make their own rules.’

As clear a sign as any of the downfall of brown furniture occurred in 2014 when New York’s new mayor, Bill de Blasio, replaced millions of dollars worth of period antiques that his predecessor Mike Bloomberg had purchased for Gracie Mansion, the official mayoral residence, with $65,000-worth of West Elm mid-century modern. The barbarians are no longer at the gates: they’re choosing the furniture.

Did the descent occur even earlier? As early as 1793, Chippendale was outmoded, at least according to his successor Thomas Sheraton: ‘As for the designs themselves, they are now wholly antiquated and laid aside, though possessed great merit according to the times in which they were executed.’ Victorians, certified brown furniture fanatics, deplored Chippendale, with the 1887 edition of the Dictionary of National Biography declaring that, ‘Elaborate and delicate, Chippendale’s designs are overwrought, and show nothing of that architectonic feeling without which there can be no true designing of furniture.’

But Chippendale could not be killed so easily. New Yorkers are stuck with Philip Johnson’s 1984 AT&T Building, at 550 Madison Avenue, nicknamed the ‘Chippendale’ for its parroting of the furniture designer’s most insipid feature, the broken pediment. 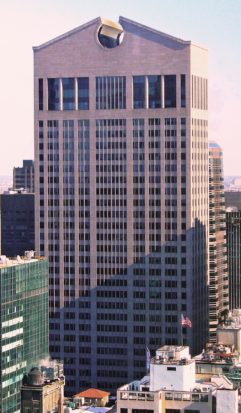 Is it a chair, is it a table? No, it’s a Chippendale: The AT&T Building, New York City

And the Met’s exhibition includes a 1984 chair by Robert Venturi called, winkingly (for it was always a wink with the post-modernists), ‘Chippendale’. Venturi chunks up the traditional ribbon-back chair to the point of abstraction.

Will brown furniture, Chippendale and otherwise, continue to languish? Some might secretly hope so. More for us.

Benjamin Riley is associate editor of The New Criterion. ‘Chippendale’s Director: The Designs and Legacy of a Furniture Maker’ remains on view at the Metropolitan Museum of Art, New York City through January 27, 2019.