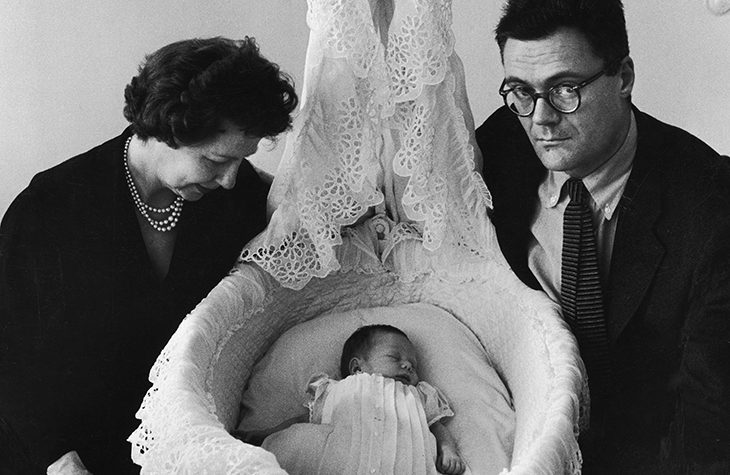 Since Robert Lowell’s sudden death in 1977 his critical reputation has suffered from the usual post-mortem slump. Interest in Lowell’s life, however, remains as strong as during his celebrity heyday, when he graced the cover of TIME magazine and marched on the Pentagon with Norman Mailer. A biography (excellent, by Ian Hamilton), an edition of his letters, and a volume of the correspondence between Lowell and Elizabeth Bishop are all firmly in print. Now we have The Dolphin Letters: 1970–1979, which includes both Lowell’s letters to his wife Elizabeth Hardwick (during and after the dissolution...

Since Robert Lowell’s sudden death in 1977 his critical reputation has suffered from the usual post-mortem slump. Interest in Lowell’s life, however, remains as strong as during his celebrity heyday, when he graced the cover of TIME magazine and marched on the Pentagon with Norman Mailer. A biography (excellent, by Ian Hamilton), an edition of his letters, and a volume of the correspondence between Lowell and Elizabeth Bishop are all firmly in print. Now we have The Dolphin Letters: 1970–1979, which includes both Lowell’s letters to his wife Elizabeth Hardwick (during and after the dissolution of their marriage) and her letters to him, long thought to have been lost or destroyed.

The disruption at the heart of this collection of correspondence began when Lowell came to England in April 1970, first as a visiting fellow at All Souls, Oxford, then as a don at Essex University. After Hardwick had returned to New York with their daughter, Lowell met Caroline Blackwood at a party and experienced a 50-year-old’s version of a coup de foudre — which was immediately reciprocated. When he refused to return to the States Hardwick at first felt this was simply the latest episode of Lowell’s periodic fits of mania, in which inevitably there figured a young, attractive girl, Lowell’s declared intention to lead a ‘new life’, his increasing mentions of Hitler, then three to four weeks in a psychiatric institution followed by the release of the now-subdued and repentant poet. But this time it was different, not least because of Blackwood’s own gifts as a writer, and because she was not, after marriages to Lucian Freud and the composer Israel Citkowitz, about to be anybody’s casual groupie.

What follows, in Saskia Hamilton’s careful and scholarly edition, is the seven-year sequence of letters between Lowell and Hardwick that resulted from their separation and divorce, interspersed by letters to and from friends — Mary McCarthy and Elizabeth Bishop prominent among them. What emerges most clearly is the persisting closeness of Lowell and Hardwick, which resulted in their tentative reunion after his marriage to Blackwood had failed — though not, as Hardwick noted, as any ‘great renewed romance’, but as a deep and loving friendship. The letters are a detailed map of a couple’s emotional upheavals, but they are also fascinating for the sheer detail with which two gifted writers discussed their reading, their writing, their friends and their foes. As gossip, this is high-class stuff; as a new and powerful artifact from a letter-writing age, it makes one wish Messenger and Instagram had never been invented.

Equally striking, and less known perhaps, is the remarkable portrait of Hardwick that emerges. She is the larger figure of these letters, despite her later assessment of her husband — ‘everything about him was out-sized’. Stunned and dismayed by his departure, she nonetheless buckled down without complaint. She tightened her belt and worked like a demon to make money, taking assignments from the New York Review of Books (which she had helped to found) and, more improbably, from Vogue.

On Lowell’s behalf as much as hers, she continued to file the tax returns, pay the rent (including for his studio), scratch up the school fees and deal with a bewildering array of lawyers, accountants and publishers. She never badmouthed her husband to their daughter, and with him usually showed the forbearance of a saint — though the occasional outburst of fury in her letters to him makes her seem reassuringly human. Amazingly, she also managed somehow to find time to write Seduction and Betrayal, a study of women and literature that ranks with Mary Ellmann’s Thinking About Women as an early and seminal work in the field.

By contrast, Lowell’s letters show the utter self-absorption of a man who, writing to his friend Adrienne Rich after her husband had committed suicide, offers condolences, then moves briskly on to outlining at much greater length the state of his own marital problems. The once gifted enfant terrible was now almost entirely enfant, drained perhaps by more than 20 stays in mental institutions and a new wife (Caroline) whose instinct during his mental crises was not to stick around.

He remained almost pathologically hard-working, his head full of lines, but having revolutionized American poetry with the ‘confessional’ poems of Life Studies, he now pursued this autobiographical mode to the point of obsession, using his life’s raw material as the basis for poems in Notebook (his ‘personal narrative’) that are themselves raw and ill-formed. He was no longer writing at the height of his powers and knew it; as he sheepishly admitted to Hardwick, he was ‘plough-pushing’.

The apogee, or rather nadir, of this was The Dolphin, a sequence of poems, rough unrhymed sonnets, that depicted the dissolution of his marriage to Hardwick, his love for Blackwood, his concern for his daughter Harriet, and of course — always, always — his concern for himself. There is the characteristic verbal felicity, a flair for metaphor — but also a stultifying failure of invention; we feel we are reading a diary made less interesting because its topics are so arbitrary and so mundane.

More important, and to the outrage of many, he used letters from Hardwick in the poems without warning her or asking permission. He had not even the defense that their use somehow authenticated his account of their relationship, since he tampered with the original letters — actually rewording them — when placing them in his poems. This mix of fact and fiction appalled some critics, and several friends — Elizabeth Bishop in particular. Characteristically, Lowell found the objections to the book perplexing, as if the damage and pain he caused others were outweighed by his need to see the book in print.

Graham Greene famously declared that a writer needs a splinter of ice in his heart when using real-life models in art. But what if the splinter turns out to be an ice-pick? The Lowell half of this compelling epistolary back-and-forth is dismayingly depressive, almost (in the words of his one-time mentor Ford Madox Ford) ‘the saddest story I have ever heard’. Fortunately, the Hardwick half is both more stoical and more uplifting.