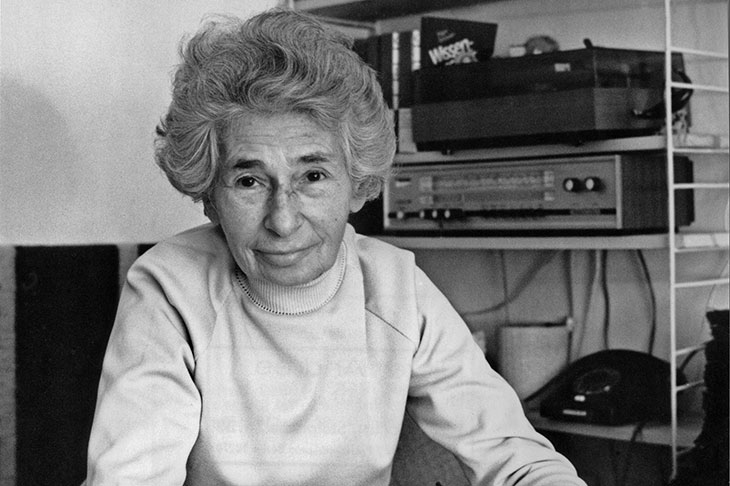 Ursula Kuczynski, as Ruth Werner, at home in retirement (Getty)

‘If you had visited the quaint English village of Great Rollright in 1945, you might have spotted a thin, dark-haired and unusually elegant woman...climbing on to her bicycle,’ Ben Macintyre opens his latest book, like the start of a gentle Ealing comedy. It will come as no surprise to his fans that the elegant Mrs Burton, Cotswolds housewife, baker of excellent cakes, mother of three and wife of a chap called Len who works in the local aluminum factory, is in fact Colonel Ursula Kuczynski of the Red Army, aka Agent Sonya, whose clandestine mission...

‘If you had visited the quaint English village of Great Rollright in 1945, you might have spotted a thin, dark-haired and unusually elegant woman…climbing on to her bicycle,’ Ben Macintyre opens his latest book, like the start of a gentle Ealing comedy. It will come as no surprise to his fans that the elegant Mrs Burton, Cotswolds housewife, baker of excellent cakes, mother of three and wife of a chap called Len who works in the local aluminum factory, is in fact Colonel Ursula Kuczynski of the Red Army, aka Agent Sonya, whose clandestine mission is to help the Soviets build the atomic bomb.

Agent Sonya was allocated her code-name by Moscow in 1931, but her formative moment had come seven years earlier, when a brutal police attack during Berlin’s May Day parade transformed her from teenage protester into lifelong revolutionary. The daughter of left-leaning German Jewish intellectuals, Ursula was articulate, adventurous and ambitious. Thrown from the political and economic chaos of Weimar into the terror of, first, Nazi Germany, and then — through her first husband’s work —Nationalist China, she was ripe for Soviet recruitment.

The first great mystery of this book is how Ursula’s faith in communism somehow survived both her experience of Stalin’s purges and the 1939 Soviet-Nazi pact. However, if Ursula lived in an inexplicably ‘monochrome moral universe’, as Macintyre puts it, then everything else in her life was a riot of color.

She was still only 21 when she had completed training in Moscow, served in Shanghai and Warsaw and had two children. Many more missions and another child followed. It is hard to avoid playing ‘bed, wed, dead,’ as Ursula’s lovers weave through the book. She of course just bedded them all, wedded when required, and outlived the lot. Meanwhile, she steadily got on with her night job; recruiting and running spies, proposing the assassination of Hitler, and transmitting varied intelligence to Soviet Russia from China, Manchuria, Poland, Switzerland, Britain and eventually East Germany.

This is, inevitably, a story involving plenty of danger. There are close shaves when clandestine radio parts fall out of easy chairs, trusted friends get piqued by jealousy, and Nazi generals move in next door. Yet against all the odds, the resourceful, useful and lucky Ursula somehow survives not only these smaller dramas but also, even more remarkably, the systematic purges of both Chiang Kai-shek and Stalin. Around her, a less-charmed support cast of friends and comrades, lovers and husbands are arrested, sent to gulags or brutally murdered.

In many ways this book is classic Ben Macintyre. At one point Ursula’s brother, also in the spying game, is told that his reports are filled with ‘too much “cyclical crises” and not enough broken lavatory seats’.This is not a problem Macintyre shares. Quirky human detail enlivens every page, and minor characters include White Russian warlords and Red Orchestra resisters, book-lovers and brawlers with missing fingers and glass eyes, treacherous and inept male MI5 operatives and their ‘formidable’ (read competent and undervalued) female counterparts. A master of bathos, Macintyre never misses an opportunity for a good gear change; and conspiratorial asides keep the reader close.

Yet this is also a straighter biography than many of his previous books, based around an extraordinary and surprisingly long life, rather than an event or operation. Agent Sonya is none the worse for this. At its heart, this is a tale about the twin demands of extreme politics and extraordinary parenthood. Occasionally Ursula found that combining the two roles worked well. Who would suspect the mother of a newborn or search a stroller for explosives? Seemingly few men around the world in the 1930s, and certainly not the male-dominated and Soviet-infiltrated MI5 in wartime and postwar Britain.

In circumstances where a concerned Nazi general might prove a safer pair of hands than a trusted nanny, however, childcare proved a constant problem. More than once the body of some other woman’s dead baby, a victim of riot or starvation, offered mute witness to the danger in which Ursula repeatedly chose to place her young children.

It seems that it was the friction generated by this unhealthy mixture of danger and domesticity that powered Ursula’s life, at least as much as the ideology she espoused. The second great mystery of this book is how she survived such an exhausting 20 years of active service and full-time child-rearing on what seems to have been just a few extra naps in the afternoons.

Ultimately, Ursula became one of the few Soviet agents to be granted honorable retirement, a mark of respect for her service. With plenty of experience in constructing a good story, she spent her last years as a successful thriller-writer and memoirist back in East Germany. The volumes she wrote have provided a wonderful resource for this book, but it is Macintyre’s own vivid retelling of her perilous professional, personal and political life that makes Agent Sonya such an accessible secret spy story.