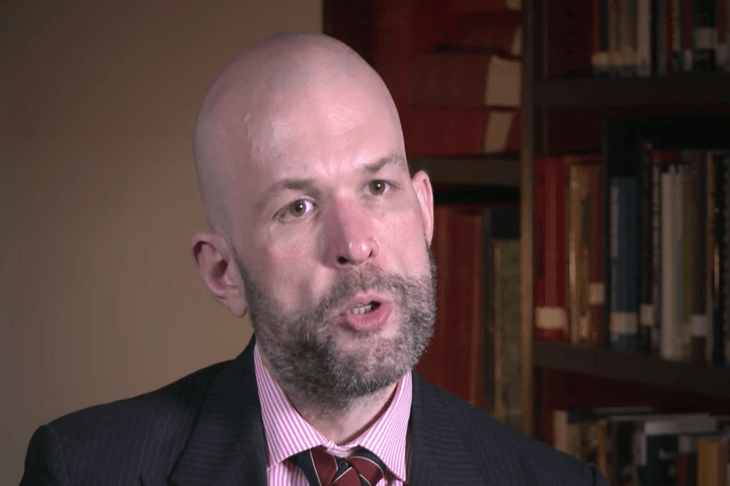 Kevin Williamson built his career as a polemicist at National Review by caricaturing unfashionable Americans, whether inner-city blacks or working-class whites. What he lacked in originality—a black child who reminds him of Snoop Dogg behaves like a “primate”—he tried to make up for in ballsiness. He was a brute who could write. And one who loved opera, to the point of seizing a woman’s cellphone and hurling it into a wall after she breached etiquette by looking at it repeatedly during a performance. When the Atlantic needed a conservative contributor, who better to turn to...

Kevin Williamson built his career as a polemicist at National Review by caricaturing unfashionable Americans, whether inner-city blacks or working-class whites. What he lacked in originality—a black child who reminds him of Snoop Dogg behaves like a “primate”—he tried to make up for in ballsiness. He was a brute who could write. And one who loved opera, to the point of seizing a woman’s cellphone and hurling it into a wall after she breached etiquette by looking at it repeatedly during a performance. When the Atlantic needed a conservative contributor, who better to turn to than the Lincoln Center’s answer to Paul Kersey?

If property destruction is what a woman gets for interrupting a show, you can guess what awaits her if she ends a human life. After taking on Lena Dunham—another soft target—in National Review, Williamson one day got baited into a Twitter argument about abortion. This time the caricature he drew was his own: the no-compromise conservative who dared to say that, yeah, since abortion is murder, women who have abortions are murderers, and therefore they ought to be hanged. QED.

This was an embarrassing thing for Jeffrey Goldberg, the editor of the Atlantic, to discover. He had hired Williamson wanting a provocative but in the end culturally acceptable right-winger, and here this man was saying things that could piss off not poor blacks or Trump-voting whites who don’t matter but the sort of professional women who actually read and work for the Atlantic. Goldberg hastily explained that Williamson’s offensive tweet was an aberration. Other defenders of this writer whose stock in trade was his take-no-prisoners pugnacity soon made the case that he hadn’t exactly meant what he’d said. The only way Kevin Williamson could survive was by not being the writer he’d spent years becoming at National Review.

Perhaps coincidentally, Williamson’s first essay for the Atlantic tried to Trump-shame his former employer, quoting his erstwhile colleague Victor Davis Hanson out of context (according to Hanson’s accusation, and claiming that National Review had betrayed its founders’ ideals. Hanson, who had kept his peace out of collegiality while he and Williamson were affiliated with the same publication, took the occasion of his response to this attack to characterize Williamson’s past work for NR as “occasionally incoherent and cruel.”

In any event, Williamson’s first Atlantic essay was also to be his last, because soon Media Matters for America, a left-wing policer of the press, uncovered a podcast in which he confirmed his belief that women who have abortions ought to be hanged. The trouble with the defense many of his allies had made of Williamson was that it tried to clear the individual while conceding the case of the class: he was only innocent because he hadn’t really meant his words; which implied that those who do mean what they say are guilty and punishable. Here was proof that Williamson had meant it. So the Atlantic fired him.

“I would…prefer, all things being equal, to give people second chances and the opportunity to change,” Goldberg wrote in a memo to staff in reply to the first round of accusations against Williamson. “I’ve done this before in reference to extreme tweeting ( third chances, too, on occasion), and I hope to continue this practice.” Second or third chances for extreme podcasting, however, would apparently be too much.

Williamson is an unsympathetic figure, and it’s easy to say that having ridiculed others as liberally as he did, he cannot complain about the grotesque magnification of the mask he made for himself. But the whole sorry episode is educational. For one thing, it shows how centrist liberals like Jeffrey Goldberg try to have it both ways—pretending to be open-minded, but only within narrow limits determined by the left; courting controversy by hiring a journalist known for his provocations, then firing him when he provokes a real controversy over matters of life and death (in theory, that is—no one, including Williamson, expects capital punishment to be imposed on women who have abortions in any foreseeable timeline, at least not in America).

Though there is plenty of shame to go around here, a particular pity is that an opportunity for a more honest and challenging discussion of abortion has been squandered. Williamson’s reasoning may be wrong, but he does not avoid the awkward implications of anti-abortion slogans the way so many opponents of abortion do: if abortion is homicide, and even sometimes called murder by those who wish to outlaw it, what principled reason is there for treating it differently from other homicides or murders or for exempting one of the parties to the crime from any penalty? More moderate opponents of abortion say that they would only punish abortionists, not the women who pay to have the life in their wombs snuffed out. But are people who arrange other homicides left untouched by the law? These are the kinds of questions that a deeper debate would take up.

There are apparently respected philosophers today who make the case, in theory, for infanticide after birth as an extension of the logic of abortion rights. Such a view is at least as extreme as Williamson’s. Should it be unpublishable in important general-interest periodicals such as the Atlantic? Surely not, if the public is to understand something of the debates going on in the academy. Williamson’s view may be uncommon there, but it too deserves to be heard so it can be refuted. On both sides of the abortion debate, bullying and moral grandstanding, sometimes tarted up as tendentious logic, too often substitute for serious confrontation with the hard questions.

The purpose of the higher kind of American journalism is to tackle such questions. But ideological tokenism, provocation for the sake of projecting an image, and panicked overreactions to bad ideas sincerely held by people of other political or religious persuasions all make a joke out of journalism’s search for even a modicum of truth. The Williamson saga is a miniature of almost all that’s wrong with political magazines today.