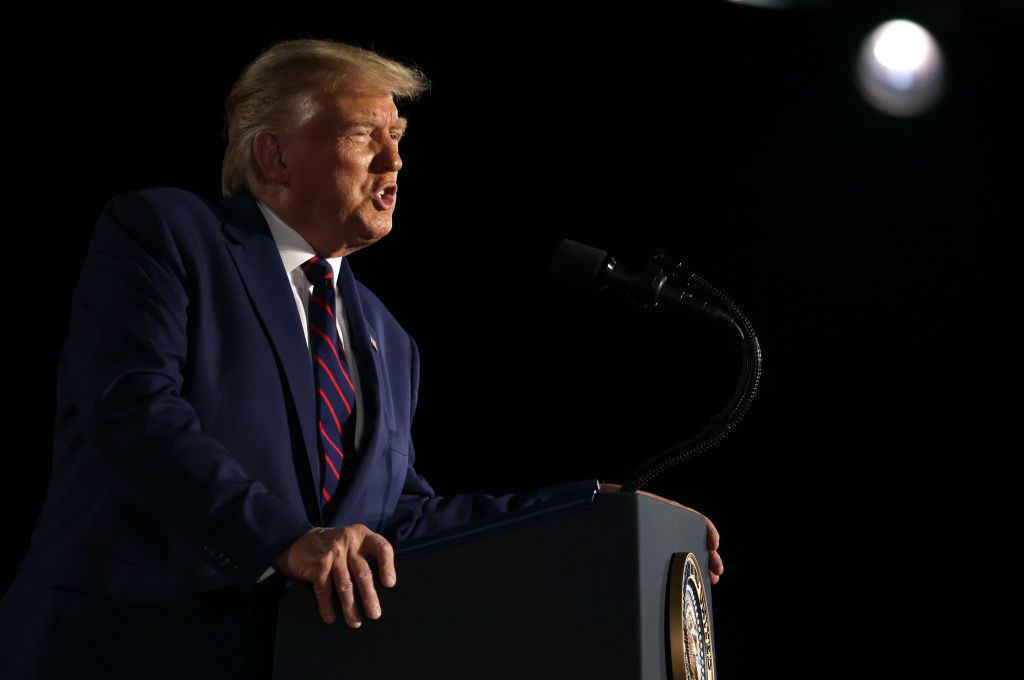 Helplessness and passivity were the defining themes of the Democratic convention last week. The American people are unable to overcome COVID-19 and an even more all-pervasive racial guilt without the right man in the White House — the nation is weak, and truth be told its would-be savior, Joe Biden, is not strong. But he is nice. The convention emphasized not Biden’s 47-year record in government, but his family and the tragedies it has suffered. Even in building up the nominee, suffering was the dominant trope. Americans must huddle together, and somehow by huddling around...

Helplessness and passivity were the defining themes of the Democratic convention last week. The American people are unable to overcome COVID-19 and an even more all-pervasive racial guilt without the right man in the White House — the nation is weak, and truth be told its would-be savior, Joe Biden, is not strong. But he is nice. The convention emphasized not Biden’s 47-year record in government, but his family and the tragedies it has suffered. Even in building up the nominee, suffering was the dominant trope. Americans must huddle together, and somehow by huddling around Joe Biden everything will be all right.

This passivity was perhaps an inevitable byproduct of the rationale behind the Biden candidacy. Is he the best Democrat around? No — he’s obviously less of a leader than Bill Clinton or Barack Obama or, for that matter, Hillary Clinton, who along with Obama trounced Biden in the 2008 primaries. Biden is nobody’s first choice for president. But the logic of his campaign is that he doesn’t have to be anybody’s first choice, he just has to be unobjectionable. Trump is supposed to defeat himself, or else COVID-19 will defeat him. Biden doesn’t have to win, in any active sense. He just has to accept office when the coronavirus and the media has defeated Donald Trump. (Note how no one in the pundit class who blames Trump for the ravages of the virus has a bad word to say about Andrew Cuomo or Phil Murphy, Democratic governors whose states have had proportionally the most coronavirus deaths. If politicians are responsible for such deaths, why does the press only blame politicians from one party? Well, you know.)

For the Democratic strategy to work, for Biden to win by inertia, President Trump and the Republicans would have to play along. But this week they didn’t: the GOP convention tore up the media narrative and wrote a new script, one focusing on the violence raging in cities run by Democrats. But Trump and his party went beyond that: they made a detailed, policy-based argument that the past three years have been years of accomplishment. The President and his surrogates boasted of replacing NAFTA with USMCA, passing criminal-justice reform, getting a significant tax cut through Congress (though this didn’t receive as much attention as usual for a GOP convention), destroying Isis, and killing Qasem Soleimani, along with many less widely heralded achievements in foreign policy and regulatory reform. Beyond the individual policies, Trump and the GOP also pointed to their success in changing the terms of debate for both parties, and for the whole country, about China, trade and American industry. And they recommitted themselves to ending endless foreign wars in the Middle East and to strengthening border security.

You expect a party to rally around its leader’s record. But the contrast between the way Joe Biden’s record of nearly five decades was downplayed at the Democratic convention and just how comprehensive the Republican boasts about Donald Trump’s successes were signaled something that is important even beyond the 2020 election. The contrast testified to what a new and transformative force Donald Trump has been, and how tied to the past the Democrats are: tied to a past, that is, of which Democrats themselves are ashamed. NAFTA, signed under Bill Clinton, and the Trans-Pacific Partnership, championed by Biden within the Obama administration, are not things that Biden or his party want to celebrate today. Nor is the Iraq War for which Biden voted. Nor is the crime bill that Biden sponsored in 1994. Even Barack Obama’s policy achievements — the Affordable Care Act and the Iran Deal — are not sources of much enthusiasm among Democrats these days. The Iran Deal hardly merits mention, and Obamacare is now an old warhorse. The Democrats are fresh out of ideas, and even the recent ideas, like Obamacare, that they do defend are not thought by anyone to be bold solutions to the 2020s’ challenges.

Trump has been a watershed president, in that he’s changed the way America thinks about certain basic economic and foreign-policy questions. Even if Biden wins in November, the country over which he’ll preside will be one whose fundamental choices have been configured by Trump and Trumpism. A look at Biden’s website and campaign literature confirms that he’s already imitating Trump: ‘End Forever Wars’, declares Biden’s site, sounding more like Trump or Tulsi Gabbard: ‘Biden will end the forever wars in Afghanistan and the Middle East, which have cost us untold blood and treasure.’ Biden has also evinced a new for him and obviously Trump-inspired interest in economic nationalism.

But in all this Biden is reactive: the challenge Republicans put to him this past week was why he has never before done any of the things he now claims he’ll do: in nearly half a century of public life, he hasn’t built a record he can be proud of or defend as the right agenda for today. Instead he’s having to change all his commitments: on crime, on abortion (he now supports using American taxpayers money to promote abortion overseas), on trade, on war. Trump has changed his views on some things as well, but he’s been not only consistent but far ahead of the conventional wisdom on the big issues of war and trade.

Snarky liberals say the GOP isn’t the party of ideas any more. They’re wrong: under Trump, the GOP is so much the party of ideas that the Democrats are reduced to stealing them, even as they ignore the now defunct agenda of their own party’s most recent president. The Republican convention was striking for the way speaker after speaker reiterated the key policies and themes — to the point where one speech often blurred into another, and it wasn’t always clear what the primary takeaway from a speaker should be. On Wednesday, Keith Kellogg and Ric Grenell both gave superb articulations of the Trump Doctrine — power and peace are its twin principles. But they and other speakers covered so much ground in their remarks that casual viewers may not have recalled any particular argument. There are advantages to an omnibus approach such as this, but downsides as well. The Trump team had so much that it wanted to tie together that at times the speeches were bursting at the seams. This was true of President Trump’s own speech as well, which presented his vision comprehensively, but as a result of being so comprehensive was also notably long. For pundits with short attention spans this was agony, as anguished tweets revealed. Yet such a long speech was a sign not only of the scope of what Trump stands for but also of the President’s ability to stand and speak for much longer than his rival. Could Joe Biden have given an hour-long live speech, even if he had something to say?

Trump and the Republicans have redefined the race. For the media, it’s still about COVID, racism, and the personality of the candidates. But Trump is not fighting the campaign on those terms — he’s fighting it on the themes he staked out in 2016, on what he’s accomplished in office, and on what’s happening in America’s cities right now. Trump says that Biden is not a nice-guy cipher; he’s a politician with actual policies that have harmed our country for decades, and he’ll do even more harm if he’s elected as the executor of a culturally radicalized Democratic agenda. Biden can deny he wants to defund the police, but he won’t denounce the radicals in his party who have pledged to do exactly that — and those younger radicals are the type of people who will staff his administration.

Trump has turned the tables on Biden and the Democrats here: instead of inertia allowing the media’s narrative to define Trump, it’s Trump who is using Biden’s inertia and lack of a positive agenda to define the Democrat. Biden says little about the flames, riots and killing in the cities because there’s nothing he can say without either admitting that his party is controlled by cultural pyromaniacs or else admitting that he’s become a firebug himself. Trump and the GOP, on the other hand, succeeded in reminding compassionate voters of what the president’s criminal-justice reform has accomplished, while making clear that Republicans will not tolerate the mayhem in Minneapolis, Chicago, Kenosha, Portland, and other places blighted by the misrule of Joe Biden’s party.

Whether Trump’s success in breaking out of the media’s preferred narrative this past week will see him through to reelection in November is a wide-open question. The forces arrayed against him are overwhelming: the Democratic party, a now openly partisan legacy media, and a college-credentialed class that has been taught to obey leftist and neoliberal ideology as second nature, lest careers and social status be destroyed by ‘cancel culture’. Corporate America is in part another name for that college class, and it also includes some globalist interests that are opposed to Trump above and beyond the elite’s cultural antipathy to conservatism and nationalism. But in Trump’s favor is the fact that he has an actual agenda, while Joe Biden dare not campaign on his own record — or his party’s. Reality is on the President’s side, and it’s a hell of an equalizer.