The two Russians may not have been much of a joke. But British viewers fell on their lacklustre performance with delight 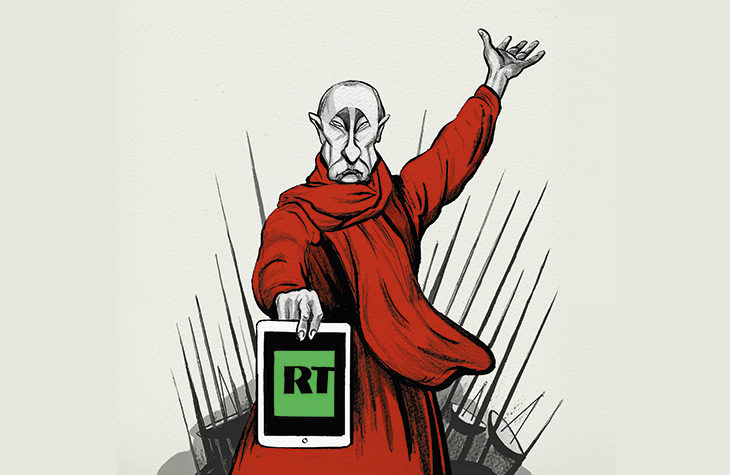 The comedy of ‘Ruslan Boshirov’ and Alexander Petrov, the two glum Russian ‘tourists’ who denied on television that they were involved in the poisoning of Sergei Skripal, seems set to run and run. The Moscow press tells us that Russia’s ‘Golden Brand’ has offered them a brand name for a company specialising in tourism, women’s clothing, and chemicals for the scent industry.

The two tried to persuade the world that they had come to Britain simply to admire Salisbury cathedral, its 123 metre-high steeple and its ancient clock. Alas, they lamented, luck was against them. First...

The comedy of ‘Ruslan Boshirov’ and Alexander Petrov, the two glum Russian ‘tourists’ who denied on television that they were involved in the poisoning of Sergei Skripal, seems set to run and run. The Moscow press tells us that Russia’s ‘Golden Brand’ has offered them a brand name for a company specialising in tourism, women’s clothing, and chemicals for the scent industry.

The two tried to persuade the world that they had come to Britain simply to admire Salisbury cathedral, its 123 metre-high steeple and its ancient clock. Alas, they lamented, luck was against them. First they were driven back by snow. (Really? Russians can cope with snow. Russian trains, unlike British ones, continue to run even when the snow is an inch deep.) Then their busy timetable forced them to return to Moscow prematurely.

Was this implausible story a bungled attempt by the Russian authorities to demonstrate that their hands were clean? Even the stolid Russian television interviewer was visibly unimpressed. Was it an expression of contempt: look, despite your brilliant policemen, we can do what we like in your country? Was it a misconceived joke, to which ‘Golden Brand’ is trying to add fuel? None of it made sense. The Russian embassy, usually so good at putting out witty, if tasteless, tweets, could only claim petulantly that it must have been the British wot did it.

In the end it looked like pure incompetence, the best explanation for most things that governments get wrong. Yet despite the appearances this time, the Russians do have a highly developed sense of humour. Some of them claim it is very like our own.

Let’s start at the top. Stalin’s humour was sardonic but rarely sidesplitting. He once quipped: ‘You have a man, you have a problem. Get rid of the man, and the problem’s over.’ The quip became a management principle. He kept his exceptionally able Politburo colleagues in order by shooting one or two whenever things needed tightening up. Occasionally he shot their wives instead.

Putin is no Stalin, despite the fevered comments you read in the western press. But he too has a sardonic and sometimes brutal sense of humour. In 2013, I was at a conference in Russia just before the German election. Putin made a long and boring speech, but livened up when it came to the questions. A prominent German politician was on the podium with him. Having recently won his own election, Putin asked who would be the next chancellor. ‘Mrs Merkel, I suppose,’ replied the hapless German. ‘Really?’ remarked Putin, raising his eyebrows. ‘The third time in a row? What kind of a democracy is that?’

There was an official humour in Soviet times, in ‘satirical’ magazines like Krokodil. It was rarely funny. Russia’s greatest writers were not much fun either. But Nikolai Gogol, the early 19th-century author of The Government Inspector, is the real thing. One of his characters remarks of another in the corrupt and hierarchical provincial society of Tsarist Russia: ‘He takes bribes above his station.’ Just like they do in Russia today.

A century later, Ilf and Petrov created the figure of Ostap Bender, the conman from Odessa who dreams up one ingenious scheme after another for milking the system. He naturally comes to a bad end: the price of publication in Soviet times. But the satire on Soviet life — the bureaucracy, the corruption, the mistrust of the authorities and their representatives — still hits the button. Ostap Bender’s sayings are as common in Russian everyday life as the aphorisms of Alice in Wonderland are in ours. One of them — ironic in modern Russia — is ‘Stay strong. The foreigners will help us.’ But most don’t translate well: they are too bound up with Soviet and Russian reality.

At a more popular level, Russian humour resembles the humour of Poles and Jews. The comparison irritates all three, but the affinities are clear. It’s said that a Jewish joke is one that no goy can understand and every Jew has already heard. Poles and Russians, too, believe they are incomprehensible to outsiders. Russian humour, like Polish and Jewish humour, is born out of adversity, oppression and the tragedies of history. The jokes are wry and anti-authoritarian. They are an aid to survival in bad times, an opportunity to express criticism, a tiny bid for freedom.

In 1991, when I was ambassador there, a little book came out in Moscow entitled The History of the Soviet Union in Anecdotes, and there indeed they were, jokes commenting pungently on events from the revolution to the collapse of the Soviet Union, often in the form of question and answer. ‘What is the difference between capitalism and communism? — Capitalism is the exploitation of man by man. Communism is the other way round.’ ‘Will there be a war? — There will be no war. But there will be such a struggle for peace that not one stone will be left standing on another.’

In Poland the answers were often attributed to wise rabbis; in the Soviet Union to the mythical Radio Armenia: the Armenians are, after all, another people with a tragic history. One of my favourites was: ‘What is the difference between the dollar and the rouble? — The dollar is backed by gold, and the rouble by tanks’ (that was before Nixon took the dollar off the gold standard). Radio Armenia was so popular that its jokes flooded capitals around the Soviet empire within 24 hours of a noteworthy event.

We and the Russians are not alone in sharing an inclination for dubious ethnic jokes: How many Irishmen, Poles, or Chechens do you need to screw on one electric light? And at the lowest level, humour is the same everywhere. In 1964, an embassy colleague and I spent five days on the Siberian railway sharing a compartment with four Russians. This was a great opportunity: in those days the KGB did their best to isolate us from the locals. Every time the train stopped at a station, a Russian would dart out to buy vodka: the train itself was dry, but the compartment rapidly became convivial. My colleague was the son of a chess grandmaster, and no mean player himself. The Russians challenged him to a game, and thrashed him. Next they sang some interminable Russian folk songs. We could only stumble through ‘Foggy, Foggy Dew’. Then they started telling a stream of dirty jokes and wanted to hear the English equivalent. We couldn’t remember any. The humiliation demonstrated one thing. Russians are much better than we are at ringing the changes on a painfully limited vocabulary of rude words.

The two Russian tourists may not have been much of a joke. But British viewers fell on their lacklustre performance with delight. Our newspapers were full of cartoons. The internet was full of tweets. One cheerful observer consoled Ruslan and Alexander with the thought that it could have been worse. Had their mission not taken them to Salisbury, they might have had to tell the world: ‘We really had to visit Scunthorpe as it was the setting of a 2012 Cultural Olympiad community opera called Cycle Song, about a past steelworker.’ Believe it or not, there really was such an opera.

Russian humour may have triumphed on that train in Siberia. But this time, the British took the prize.