The case for Genghis Trump

What force on earth can reform a corrupt or incompetent elite, one that serves itself and its dreams rather the citizens of the country? 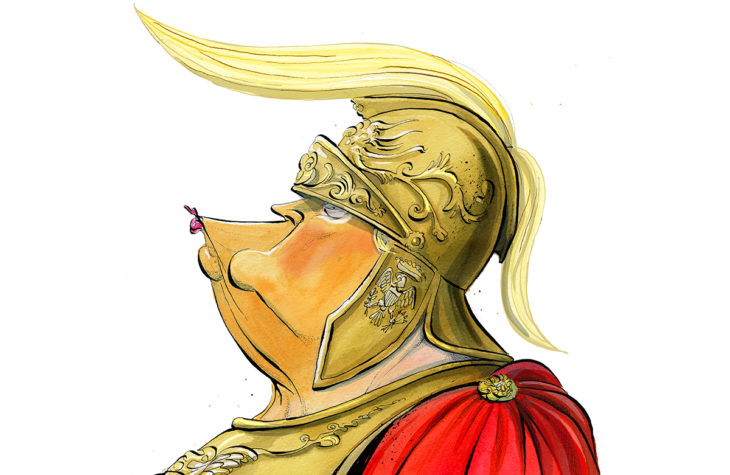 The case for Genghis Trump

America has a problem, and it’s not Donald Trump. Suicides and deaths by overdose are up; life expectancy is down. The country that led its allies to definitive victory against both Nazi Germany and imperial Japan in just four years has now been fighting in Afghanistan for nearly 20, with no end to the Taliban in sight. Wall Street prospers but young Americans are deep in debt, manufacturing employment is in decline, and the Great Recession of a decade ago revealed how fragile and irrational the...

America has a problem, and it’s not Donald Trump. Suicides and deaths by overdose are up; life expectancy is down. The country that led its allies to definitive victory against both Nazi Germany and imperial Japan in just four years has now been fighting in Afghanistan for nearly 20, with no end to the Taliban in sight. Wall Street prospers but young Americans are deep in debt, manufacturing employment is in decline, and the Great Recession of a decade ago revealed how fragile and irrational the whole financial system is.

For all the talk we hear about ‘polarization’, the policies that led to these grim results were born of bipartisan consensus. Democrats and Republicans might bicker about abortion or guns, but for a quarter-century they were of one mind about free trade and foreign policy: Nato to Nafta and everything thereafter. They each made generous provision for financial and pharmaceutical interests. Enlightened opinion on university campuses and in the major media not only helped shape and amplify the consensus but marginalized practically all dissent from it.

Even today, the architects and propagandists of two and a half decades of policies that led to insecurity, despair and death are unrepentant. Worse, they demand more of the same: an end to Trump’s ‘trade war’ and more shooting wars in the Islamic world and beyond. Drugs and high finance are the future of the US economy, they insist, and manufacturing is better sent abroad.

You have to be a very idealistic democrat not to realize that elites drive society. The question is whether they drive it well or poorly — and with America’s elite, the answer is clear. But what force on earth can reform a corrupt or incompetent elite, one that serves itself and its dreams rather the citizens of the country? Or, perhaps more difficult still, what can compel it to reform itself?

The answer for Christians in the dying days of the Western Roman Empire was Attila the Hun, ‘the scourge of God’. The violence he visited upon the Romans was a call to repentance. St Augustine had said much the same thing about the Visigoths who sacked Rome itself in AD 410: they were the instrument, he wrote in The City of God, of that ‘divine providence which is wont to reform the depraved manners of men by chastisement’. The idea that heathen barbarians could do what polite reformers or nagging moralists could not persisted down through the Middle Ages and into modernity. Genghis Khan and Tamerlane were two of the later figures to fill the role of flagellum dei.

Secular thinkers in the centuries that followed put their own twists on the theme. For Machiavelli, a ruthless prince who employs shocking violence can be the salvation of a state that has fallen under bad management. In the 18th century, Viscount Bolingbroke would refine the strategy in a nonviolent direction by suggesting a ‘patriot king’ as the constitutional remedy for a state drifting toward oligarchy. Bolingbroke in turn was a notable influence on America’s founders — indeed, his influence, as much as Montesquieu’s, is one reason we have a distinct executive branch in our national government.

The lesson here is that one mighty individual from outside the society that stands in need of reform — whether he’s outside because he’s a barbarian invader or because he occupies a separate constitutional office — can be a source of regeneration, even if the outsider happens to be as unpleasant as Attila. Just as well-meaning reformers often bring about catastrophic results — indeed, much of America’s pernicious elite is reform-minded to the core, so far as other people’s countries and other Americans’ livelihoods are concerned — the bloodiest barbarian can be a force for good, if the right lesson is learned.

Luckily for the leadership class that has served the country so poorly of late, Donald Trump is not, in fact, a marauding warlord from the steppe. He’s not even a sanguinary Machiavellian prince. A tsar or sultan would have had, say, John Bolton put to death for advocating worthless wars that are the ruin of the regime. President Trump only humiliates and fires him. If America had a left that cared about class and not just identity politics, it would celebrate Trump for doing the same to the president of ExxonMobil. It’s a mistake to think that when Trump hires a Bolton or a Rex Tillerson he is elevating them. They don’t come away from the experience with more prestige and power than before.

Whatever else Trump has done, even his worst enemies will concede that he has injected back into the national conversation fundamental questions about economics, national cohesion and grand strategy that had been treated as closed for a generation. Voters who dissented from the grand consensus had no party and no voice in the media until Trump provided both. But since 2016 only a handful of others, such as Tucker Carlson, have reinforced him. The wealthy and well- educated have been forced to talk about Trump’s issues, yet they do so without admitting any culpability for the country’s plight. This state of denial might see them through the end of this administration but it won’t help them restore the public confidence they forfeited long before the barbarian reached their gates.

The very things that Trump’s detractors call his vices are his ‘barbarian’ virtues: he refuses to listen to the experts or to govern by any sophisticated ideologue’s playbook. He flouts the very principles of the policy elite’s legitimacy — their claims to embody rationality and necessity. His violence is metaphorical, but as devastating on the mental level as Attila’s was on the battlefield.

The only trouble is that western elites did not always heed the lessons of those ravagers of civilization who followed in Attila’s footsteps, and our own incorrigible elite might not be moved to mend its ways even by the trauma inflicted by Trump. If this kinder, gentler scourge of God is not enough, Americans will continue to suffer for the sins of the leadership class until a more terrible scourge descends. Happy New Year!