We all know about ‘flattening the curve’, but are you comfortable yet with ‘fomite’? 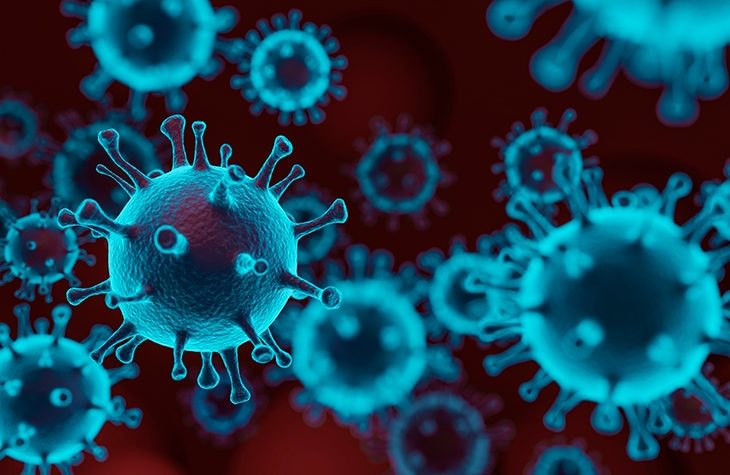 The vocabulary of Brexit has passed into oblivion. Now there’s fresh work to be done. We all know about ‘flattening the curve’, but are you comfortable yet with ‘fomite’, a word my older son, a virologist, taught the family early on? It’s an object or surface on which an infectious agent like a coronavirus might be lying in wait — just for you. A check in the post, next door’s cat, the tennis balls you are about to double-fault with — all good candidates. You knew that already. Then how about ‘lipid envelope’, the outer...

The vocabulary of Brexit has passed into oblivion. Now there’s fresh work to be done. We all know about ‘flattening the curve’, but are you comfortable yet with ‘fomite’, a word my older son, a virologist, taught the family early on? It’s an object or surface on which an infectious agent like a coronavirus might be lying in wait — just for you. A check in the post, next door’s cat, the tennis balls you are about to double-fault with — all good candidates. You knew that already. Then how about ‘lipid envelope’, the outer shell of certain viruses. We learn with relief that the envelope of our coronavirus of concern is easily destroyed by soap and water. More good news: this virus has a genome made of single-stranded RNA that’s far larger or longer than most — 30,000 bases. Viruses mutate randomly at astonishing speed. But this one has to preserve the stability of its unwieldy genome and can’t easily chance upon some even nastier version of itself. Less good news: as it spreads around the globe and its throws of the dice multiply by magnitudes, it could get lucky. Finally, there’s ‘herd immunity’. Christians, who like to refer to themselves as sheep in a flock, will have no problem, but the rest of us are mildly affronted when an epidemiologist or politician refers to us as a herd. Why not ‘popular resistance’? A little inflammatory? It needs a poet’s touch.

Microphones were installed in the House of Commons chamber in 1950. A mere 38 years passed before a parliamentary debate was broadcast on the radio. We would probably blush now to hear the arguments against our being allowed to follow in real time the intricacies of parliamentary debate. But the institutional habit of treating voters like children dies hard. It spooked most of us to hear that the prime minister was suddenly in hospital, then in ICU with a serious condition, so No. 10 disclosed, of being ‘cheerful’. We knew very well that these days cheerfulness can be effectively cured at home. Dread of spreading ‘alarm and despondency’ is one of the more tiresome elements of our World War Two inheritance. Now is the time for us all, including communications staff at No. 10, to be grown-ups. The next full cabinet discussion of how to proceed with, or exit from, the stay-at-home policy, or whether schools could open in September, should be televised. We don’t ask for a say — we want to be involved. We are involved — heavily and particularly. If there are differences along the lines of economy vs health, let’s hear them. It’s an important argument. If there are variants in the expert advice, we can take it. If Boris Johnson, happily back at the table, overrides some or all of his colleagues, so be it. He was granted that authority in December. We understand well enough disagreements among politicians, just as we understand collective cabinet responsibility. In this crisis there are risks, whatever direction the government takes. And this is the point — the risks are ours.

How are these days changing us? Time itself is altering. It’s spreading across a vast plain around us, thinning out, perhaps about to vanish. Last week I was at work around midnight. I wanted a character to be distracted one morning by a sound outside his bedroom. I wrote of ‘birds quarreling in the eaves’. Instantly, I knew it wasn’t mine. Its source was well-known, but lost to me. I went to our poetry shelves and took down a Penguin Selected, its ‘acid-free’ paper the color of aging banana. I had a pretty good idea the line was from a D.H. Lawrence poem, ‘End of Another Home Holiday’. It wasn’t. I sat down anyway to re-acquaint myself with half a dozen favorites, including the beautiful deathbed poem, ‘Bavarian Gentians’, and the strange Lawrentian moment of hatred in ‘Meeting Among the Mountains’. I reread a fine essay on the poet by James Fenton. I inspected the flyleaf of my Selected. My name, then Woolverstone Hall (my state boarding grammar school) — then 1965. Who else obsessed me that year? Only Yeats. And there it was, in my Collected, also from 1965. ‘The Sorrow of Love’, 1925, and its first line, ‘The quarrel of the sparrows in the eaves…’. My 16-year-old self (how I suddenly missed him) had copied out an earlier, 1892 version, which I used to prefer. And still did. It was well past 3 a.m. Who cared? We now live beyond time. Behind me, almost warm air was pouring through an open window. The moon was setting. I could have found the Yeats line in seconds on Google. Instead, hours of poetry and sad-sweet reminiscence in a timeless mindscape.

One last vocab item. Serology: the examination of blood serum for antibodies. The UK government has been promising a test that will show who has had the disease and is therefore immune. This is our get-out-of-home-and-back-to-work card. In that same spirit of grown-up politics, and to spare itself yet more beatings, it is time for the government to broadcast the growing scientific consensus that a reliable test is proving extremely difficult. Too many false positives and, even more dangerous, false negatives; many who have had no symptoms have no detectable antibodies; many varieties of tests pick up immune responses to other coronaviruses that cause common colds; it is not yet known how long immunity lasts. The words of Larry Brilliant, the distinguished epidemiologist of smallpox eradication fame, are chilling. ‘This bundle of RNA in its sack of fat… sits patiently until there are no more susceptible.’

All human artifacts and institutions deserve respect for outlasting the centuries. The Rosetta Stone, the Hereford Mappa Mundi, The Spectator! Approximately 2,200 issues ago I read a withering parody of an exuberant young writer giving an interview. What a pompous fool! I was mostly dashed, slightly honored and ever since have tried to be more careful. So, uh, thanks a lot, Spectator. And happy 10 to the fourth.

Copyright of Ian McEwan. This article was originally published in

The Spectator’s 10,000th UK magazine. Subscribe to the US edition here.